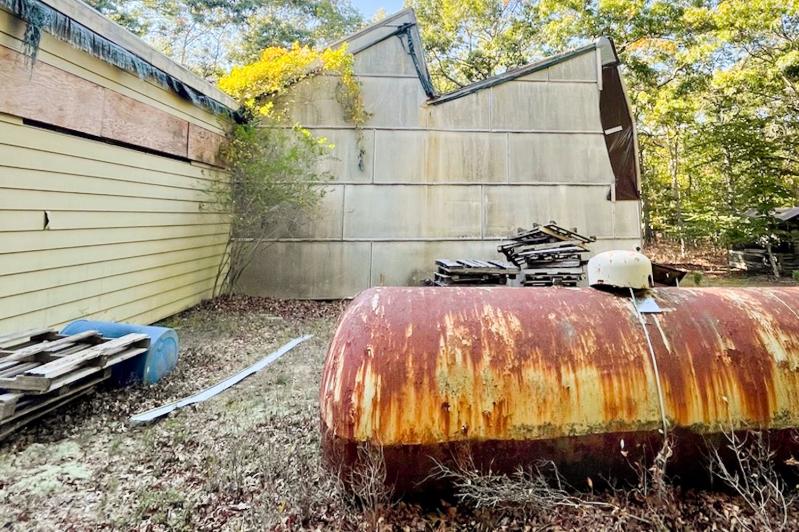 The designation “is about raising awareness of the site and the people who are fighting so hard to save it,” said Katherine Malone-France of the National Trust for Historic Preservation.
By Christopher Walsh

The multiyear effort to preserve the Springs house and studios of the late Abstract Expressionist artists James Brooks and Charlotte Park had another boost yesterday with the announcement that the National Trust for Historic Preservation has included the site on its annual list of the 11 most endangered historic places in the United States.

A privately funded nonprofit organization, the trust works to safeguard the country’s threatened historic sites. Its group of “Historic Artists Homes and Studios” includes a listing of artists’ homes and studios, among them the Pollock-Krasner House and Study Center, also in Springs.

The trust names its yearly selections after a competitive process: For the 2022 list, it received 122 letters of intent from 38 states and territories. “We are looking for a range of factors,” Katherine Malone-France, the trust’s chief preservation officer, told The Star. “We’re looking for places that tell our shared history, that face an urgent threat. We are looking for places where there is a local group that is invested and working for the preservation, and for places where there are preservation-based solutions to the challenges the site faces. Brooks-Park checks every single one of those boxes.”

The designation “is about raising awareness of the site and the people who are fighting so hard to save it,” she added.

The 11-acre site, off Neck Path, includes the married artists’ studios, their residence, and a cottage — all of which have deteriorated — as well as hiking trails. Brooks and Park were leading members of the Abstract Expressionist movement, which contributed to New York City’s emerging status in the mid-20th century as the center of the art world. The couple’s friendship with Jackson Pollock and Lee Krasner was a factor in their importance both locally and in the history of 20th-century art. Brooks died in 1992, Park in 2010.

“Abstract Expressionism changed the course of how we think about art,” Ms. Malone-France said. “This place is not just nationally significant, it is internationally significant. And we need to tell the stories of both James Brooks and of Charlotte Park, who, like so many women artists, did not receive the recognition she deserved in her lifetime.”

When East Hampton Town acquired the property in 2013, using $1.1 million from the community preservation fund, the plan was to demolish the structures. The purchase was meant to create open space, but a group of Springs residents formed the Brooks Park Heritage Project and lobbied to preserve the buildings instead.

The buildings were designated a town historic landmark in July 2014, which allowed for C.P.F. money to be spent toward the site’s restoration, but not for its management. In 2018, the town board approved a management and stewardship plan for properties acquired with the community preservation fund, which included an estimated $850,000 to restore Brooks-Park.

The following year, however, the town’s property management committee concluded that “due to deterioration and vandalism, the buildings are now derelict and the cost of restoration is considered to be prohibitive.” It recommended that the structures be demolished and the site cleared, and the architectural review board approved a demolition permit in January 2020.

That spurred a renewed push for a not-for-profit entity to manage the property. A group formed to develop a management and maintenance plan issued a final draft to the town in December.

That committee has applied for status as a not-for-profit organization. In February, members launched a website for the “Brooks-Park Arts and Nature Center,” and the East Hampton Trails Preservation Society hosted “Brooks-Park: The Intersection of Art and Nature,” a hike along the trails, that drew more than 100 participants.

Separate from yesterday’s announcement, Supervisor Peter Van Scoyoc said on Monday that he had contacted the committee “to say I feel that there is now enough community support to justify the expenditure to have these structures restored, and I feel confident that things have reached critical mass.”

In his liaison report at yesterday’s meeting of the town board, he praised the committee members, saying they have been “extremely successful in conveying to the public the importance of these buildings and the history of art in Springs.”

A Holiday Gift for Surfers and Beach Lovers
Holiday Lights Go On at the Lighthouse Saturday
Covid Vaccine Clinic at St. Luke's
END_OF_DOCUMENT_TOKEN_TO_BE_REPLACED