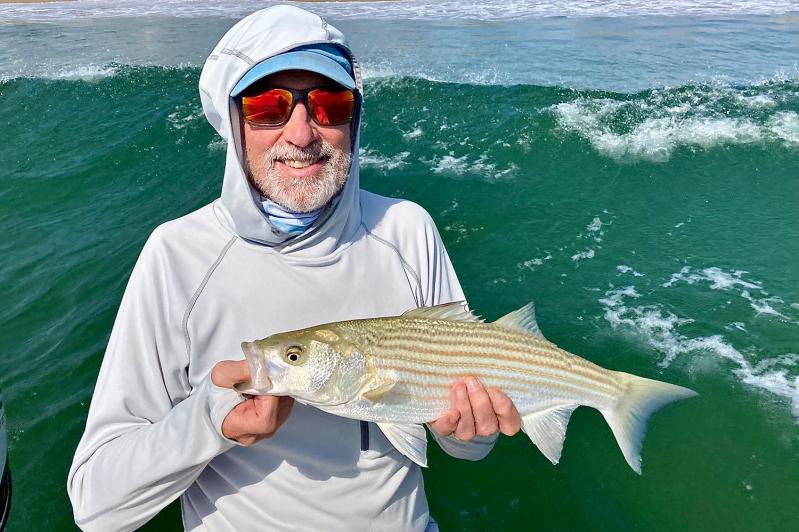 After a lull on the fishing scene that had lasted for several weeks, there was finally a significant uptick in the action, that is, until the gusty east winds commenced on Saturday morning and didn’t relent until late Monday. As such, the three-day blow over the holiday weekend, put a severe damper on things for those intent to wet a line. Still, many are encouraged by what lies ahead for the remainder of the season.

“Thankfully, the action has improved 100 percent over the past week,” said a relieved Ken Morse at Tight Lines Tackle in Sag Harbor. “The bass and blues moved in thick out at Montauk, as well as at the Race and Plum Gut. False albacore and some bonita were also taken. I don’t think the winds this past weekend will hurt it much.”

Morse said that large bluefish have finally appeared at Jessup’s Neck, with diamonds jigs the hot lure of late. He added that surfcasters have also witnessed improved action along the ocean beaches. “It’s definitely gotten better. Let’s hope it continues.”

Morse also was geared up for the start of blackfish season, which opened on Monday in Long Island Sound waters (and opens tomorrow in the rest of New York). On Saturday, Morse received a shipment of 24 bushels of green crabs, the bait of choice for blackfish anglers. And yes, I got my bushel and will hopefully put it to good use shortly.

“Everyone is jazzed up to start fishing for them,” he added. “In over 25 years in business, I’ve never sold as many crabs as I have over the past few weeks. All signs point to an excellent season ahead.”

“It’s too bad the winds kicked up over the holiday weekend, as the fishing had been really good before blow,” said Harvey Bennett at the Tackle Shop in Amagansett, who continues to run his end-of-business sale at his establishment on Montauk Highway. “The bass fishing was excellent and the bluefish were thick in many areas.”

Bennett added that sea bass and porgy fishing remained strong, especially near Montauk, and that surfcasters on the south-facing beaches have done well on striped bass. “And don’t forget that blowfish are still hanging around Three Mile Harbor, along with snappers.”

“Yep, folks are getting ready for blackfish,” confirmed Sebastian Gorgone at Mrs. Sam’s Bait and Tackle in East Hampton.

Gorgone also said that before the winds kicked up, that bass and blues were running well near Montauk, and that the action along the ocean beaches showed signs of promise. “Porgies and blowfish are still around locally, and sea bass are running well out in Block Island Sound.”

Over at Westlake Marina in Montauk, Dave Reutershan also said that the fishing was “very good” before the weekend. “Striped bass finally showed up at the Elbow and other inshore spots near the Lighthouse, and bluefish were thick in many places too,” he said.

Reutershan added that a few brave fishermen took to the water in Sunday’s rain and wind, and scored well on false albacore and striped bass. “It was first really good day we’ve seen on the albies this season. It’s ironic that the lousy weather brought out the best day of fishing for them. They deserved good action given the terrible conditions they were in.”

Farther offshore, Reutershan said that the yellowfin bite was solid near the Butterfish Hole and the Coimbra wreck. “And those who went farther off to near the Canyons did very well on bigeye tuna, as well as swordfish on the night bite,” he said. “It’s been great to see so many swordfish come back to the dock the past few years. They have made a nice recovery in their stocks.”

Like many others, Reutershan was enthused about the opening of the blackfish season. “People have been chomping at the bit to go fishing for them. The commercial guys have done well so far, so it looks like a great season ahead.” Westlake, too, has a large supply of green crabs available for purchase.

The fall edition of the Montauk SurfMasters striped bass tournament is underway, and it’s no real surprise who is on top of the leaderboard. Brandon Sausele, who captured the title in the spring event, leads with a 34-pound fish taken on a plug on Oct. 5 from a south-facing beach. Bill Shulken is in second place with a husky 25-pound fish that was taken the same night.