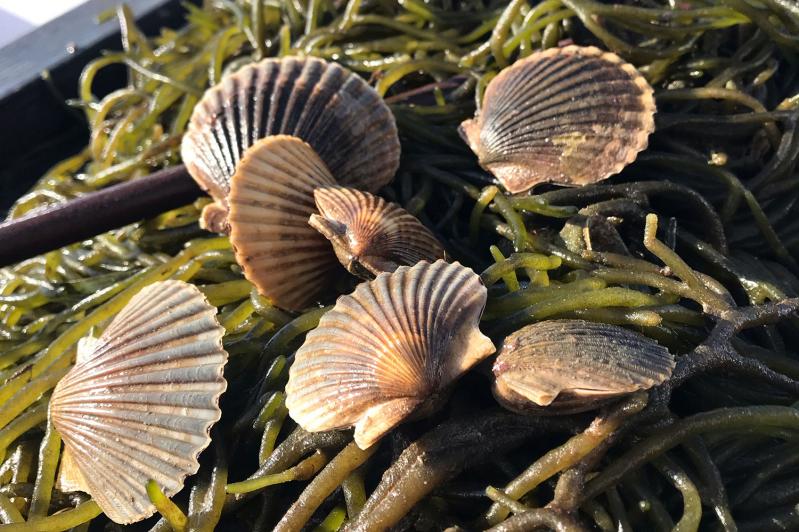 This year’s scallop season looks to be another disappointing one.
Jon M. Diat
By Jon M. Diat

I was not optimistic at all. The reports of a massive die-off of adult bay scallops during the later stage of summer put a damper on my hopes and those of many others for the third year in a row.

Marine scientists are not in complete agreement on the cause of the demise of the popular local bivalve, but many signs point to a mixture of high-water temperatures, low oxygen levels, and the discovery of a new parasite, all combined with the stress of spawning in late spring. Science is sometimes a complex riddle that takes time to solve.

No matter the reason, I was determined to find out for myself if the dire prediction of another terrible season was in fact true. However, last week’s extended northeaster halted any efforts to do some pre-season reconnaissance until the seas calmed down by Sunday morning. It was a long wait.

By that time, I hauled out one of my iron scallop dredges from the basement. The season was set to open in state waters Monday morning, and I needed to know if it made sense to retrieve five more of the dredges to take down to the boat 24 hours later. My fingers were crossed that enough scallops would be found to make that effort worthwhile.

“Let’s drop her in,” I said to Ray, my deckhand, nodding that it was okay to release the heavy dredge into the water, not far to the east of the Sag Harbor breakwater. I slowed the diesel engine to a crawl, as the southwest wind began to kick up. “Let’s hope for the best.”

About five minutes later, it was time to pull it up from the 10-foot depths. Hand-over-hand, I retrieved the yellow nylon rope. Looking below from the stern deck into the clear water, I could make out the sandy bottom. The 36-inch-wide dredge finally came into view.

Lifting it over the gunwale and onto the culling board was not easy. “Ah, that does not look good,” I muttered to no one in particular. “No, it doesn’t,” agreed Ray. The first pull netted one adult-size scallop, and not a single bug (undersize scallop). An hour into our excursion, we had five “keepers” and a mere handful of throwbacks.

Relocating to another area in Shelter Island Sound in the search for better fortune, I crossed paths with John Kotula, a commercial bayman from Shelter Island, who was tending to the multitude of conch pots he had set out. “I’m not even going to try tomorrow,” he said in dismay as we came alongside each other to chat, referring to the opening of scallop season. “It’s so depressing to see what has happened to the scallops.”

Note that recreational folks can retain one bushel of scallops per person, per day, while commercial fishermen can retain 10 bushels. I could easily understand Kotula’s point of view and I felt his pain and anguish.

I was ready to call it quits on Sunday, but I decided to try one last area that had proven successful in the past. Surprisingly, about three dozen adult scallops found their way into the back of the dredge in rather short order. It was enough to convince me to try in earnest on Monday, when scallops could be legally retained for harvest.

Monday morning dawned bright and breezy at the dock. Unlike the days of bountiful catches and dozens of boats on the water at daybreak, there were no other craft in sight. Clearly, many knew it was not worth the effort.

Heading back to the area where we had marginal success on Sunday, we threw our six dredges overboard in the hope of a meal or two. It was a painful pick as some would say, but after three hours of hard work, we nearly filled up a bushel basket. While the catch exceeded my low expectations, I’m not sure if I will try again another day. Still, I will enjoy my first scallop dinner in three years.

The aforementioned windy weather also put a stranglehold on fishing from boat or beach. However, the weekend did offer a brief lull and the action was solid, especially for those who pursue striped bass out at Montauk.

“The fishing has been really good,” Kathy Vegessi, the shoreside support arm of the Lazybones, a half-day open boat, said on Sunday afternoon. “Lots of bass have been landed, including many-slot-sized keepers.” Only bass between 28 and 35 inches can be retained.

Vegessi also remarked that some monster-size sea bass nearing six pounds have also found their way into the catch chasing diamond jigs, the lure of choice of late. The Bones sets sail every day at 8 a.m. and 1 p.m., for those who want to cash in on the action while it lasts.

“The fall striped bass run is the best I can remember in a very long time,” said Capt. Daniel Giunta of the Double D, a Montauk charter boat. “Blackfishing has been great as well. There is a tremendous amount of small blackfish out there which is great to see, as well as enough keepers to send everyone home with dinner.”

Over at the Tackle Shop in Amagansett, the owner Harvey Bennett said that the strong run of squid continues in both Three Mile Harbor and Fort Pond Bay. “They are even catching the squid during the day.” Bennett agreed with Giunta that Montauk continues to be the place to be for consistent striped bass action. “It’s been excellent.”

You only have a week or two to take advantage of Bennett’s end-of-business sale. Everything must go and good deals can be had. Don’t hesitate.

“Very few fish reports from this area,” sighed Ken Morse at Tight Lines Tackle in Sag Harbor, lamenting that the incessant wind put a dent in anglers’ fun. Morse said that a few bass were picked up by shore-bound anglers, but that the rough ocean made it a challenge.