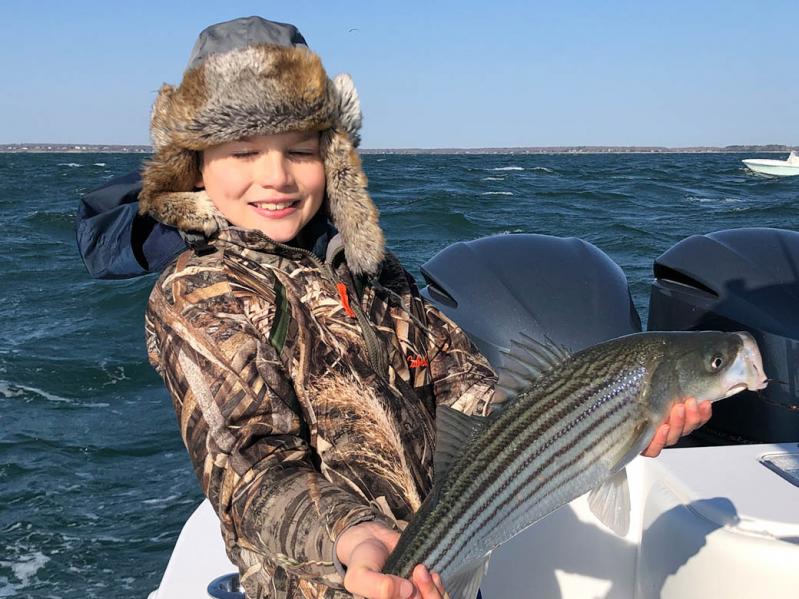 Max Goralski of Noyac landed and released this striped bass on a recent outingat Jessup’s Neck with his father, Erick.
Erick Goralski
By Jon M. Diat

Most of us can agree that last winter was docile at best. There was no snow to shovel and nary a molecule of salt to apply on walkways. It was rare to witness a cold snap that dug deep into our bones, making us wish we resided in a much warmer climate. We got off easy, too easy, perhaps.

But these last few weeks of excessive cold, rain, and wind have us now yearning for some real warmth. It’s been spring for over a month already, but it certainly does not feel that way. Perhaps the entry into the month of May this weekend will finally usher in some much-needed sunshine and calm skies.

Meteorological wishes notwithstanding, it has not been a surprise to see our local water temperatures drop. On a jaunt to my lobster traps last weekend, I saw 47-degree water at Cedar Point to the entrance of Gardiner’s Bay, a 3-degree drop from a week earlier. Although my neighbor’s 14-year-old daughter did her version of a polar bear plunge in Saturday afternoon’s rare sunny and bright sunshine, at this rate, I wonder if swimming will be on the agenda on Memorial Day.

“There is a good amount of small bass in the ocean and on the bay side,” reported Harvey Bennett at the Tackle Shop in Amagansett. “Not many keepers to speak of, but more should show up very soon if we get a string of warmer days.” He noted that White Sands and Ditch Plain have seen consistent action of late for surfcasters, with small bucktails, diamond jigs, and rubber baits being the popular lures of choice.

Bennett is still finalizing his store hours, but can be reached at 631-324-7770 or at [email protected] for immediate needs.

“The weather has been a giant headache of late,” Ken Morse, the proprietor of Tight Lines Tackle in Sag Harbor, agreed with a heavy sigh. “The water temps have dropped off and slowed down the bass bite a bit. But there are still plenty of schoolie-size fish from the back of Sag Harbor Cove all the way westward to Jessup’s Neck and beyond. Hopefully we’ll get some better conditions soon. We deserve it.” Note that anglers can retain one bass between 28 and 35 inches this year.

Morse said that porgies should be making their presence felt soon, along with weakfish. He is also looking forward to the opening of the fluke season on Monday, when anglers can retrain four fish over 19 inches per day.

“Worms have been flying out of the shop,” proclaimed Sebastian Gorgone at Mrs. Sam’s Bait and Tackle in East Hampton. Gorgone said that folks are using them to catch small stripers in Three Mile Harbor, although it’s possible a few were put on a hook in an attempt to catch flounder.

“I have one customer who says he does pretty well with flounder in Northwest Harbor, but I have not heard from him yet,” he said. “I’d love to see some flounder being caught.”

Danny Lester, an Amagansett bayman, has landed some fluke and porgies in his pound traps of late. Along with locally harvested clams and oysters, the aforementioned fish are available from several coolers at the end of his driveway on Abraham’s Path. The fish selection will vary depending on the catch of the day, and payment is on the honor system.

No reports from Montauk, as party and charter boats remain on the sidelines due to the Covid-19 outbreak. The captains are anxious to get back on the water for paying fares.

Some good news: The Montauk Youth Fluke Tournament is back for the 2020 season. Anglers 16 years of age or younger can sign up in hopes of being crowned the Duke of Fluke, as well receiving some great prizes.

The $25 entry fee in cash or check can be mailed to Capt. Tim O’Rourke, who is once again coordinating the popular contest, at P.O. Box 2120, Montauk 11954. The Montauk Marine Basin will be the official weigh-in station. The deadline to sign up is July 15.

Proceeds raised will once again go to the Tyler Project, which was established several years ago in Montauk after the passing of Tyler Valcich, to increase awareness and improve the coordination and delivery of mental health services for students, young adults, and families on the East End. Funding is used for counseling, educational services, and programs to help predict and prevent some of the crises, including cyberbullying, that young people face today.

“Last year we raised $2,200 which was terrific,” said Captain O’Rourke, who runs Montauk Point Fly Fishing Charters. “We also had a lot of great support from many local businesses. The kids have a great time and it’s a wonderful cause to help.” The tournament concludes on Sept. 30.

Last year’s winner, Emily Bruno of Montauk, fished hard and long to come out on top. No doubt she already has her hooks sharpened to retain her crown.