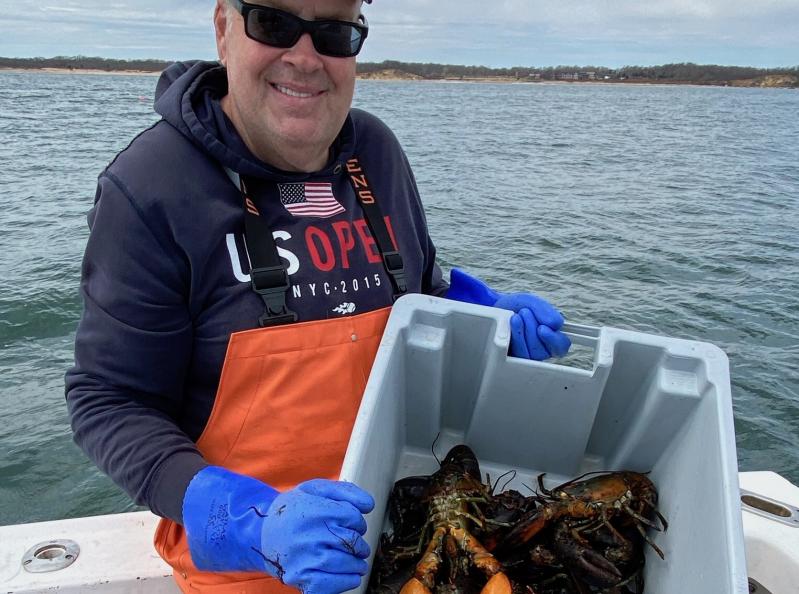 The columnist's recent haul of lobsters was a promising start to the season.
Terie Diat
By Jon M. Diat

﻿I was very lucky. As the owner of my marina has known for about 25 years, I like my boat to be one of the first launched every spring. In the case of this year, my boat happened to go in the drink on March 18, still technically winter as the calendar clearly showed.

But that was okay with me, especially since a short time later, New York announced that marinas and boatyards were deemed nonessential businesses under the governor’s New York State on Pause executive order. The ban was lifted late last weekend, so long as the establishments continue to practice proper safe-distance protocols. Unfortunately, party and charter boat operators are still unable to set sail with paying fares.

But even if you are fortunate to have your boat in the water, you should pay heed to your fuel gauge, as getting a fill-up may still be a challenge. Thankfully, I topped off my twin 90-gallon tanks with diesel after my last trip in November, even though the price was a wallet-busting $4.19 per gallon.

Loaded with an ample amount of fuel on a bright yet chilly morning at my deserted marina two weeks ago, I decided it was time to load up my stern deck with the three sets of lobster traps I had recently repaired. It felt good to do some heavy lifting in the fresh, clean air, as I did a final check on my gear to make sure knots were properly tied, buoys affixed with their designated permit numbers, and enough bait bags at the ready to be filled with bunkers that have been in silent slumber in my basement freezer since last fall.

On the ride out to the lobster grounds to the east I witnessed nary a single boat on the horizon, but massive flocks of gannets were in full residence on a placid Gardiner’s Bay. The giant, white-colored seabirds with their black-tipped wings have an enormous wing span upward of six feet, and were in full dive-bomb mode feasting on hapless schools of migrating bunker.

The largest of all North Atlantic seabirds, the aerodynamic, torpedo-shaped gannets have been a constant presence from Montauk to the western part of Peconic Bay for well over a month now. Seeing them on a feed is a true spectacle.

After a weeklong soak, it was time to check on the gear. A narrow weather window appeared on April 15, and the hourlong ride was pleasant in the heated cabin. The gannets were still around en masse as I sidled up to my first buoy on the strong incoming tide. Pulling hand over hand on the rope tethered to the trap 35 feet below, I was pleasantly surprised to see four keeper-size lobsters in the end parlor when it came to the surface. All were prime, hard-shelled specimens. By any standard, it was a great start. The next trap nearby contained another keeper, as well as an egg-bearing female that was quickly released.

It took about an hour to cull through the remainder of my gear, as several curious seals kept watch on my activity. Their dark gray heads bobbed up and down on the surface of the 47-degree water, reminding me of a carnival game of Whack-a-Mole. I felt as if they enjoyed my company. I’m quite sure I was the first human face they had seen in several months.

The tally of my final catch was decent, but not anywhere as good as the two previous seasons, according to my logbook. On the positive side, I released about 20 egg-bearing females, a number I had not witnessed in many years. Unfortunately, the vast majority of the crustaceans were riddled with shell rot, a disease that has afflicted more and more lobsters since it came on the scene in the late 1990s. Not good.

As for the local fishing scene, reports continue to be on the scant side as angler participation has been at a minimum. But with the warming weather and boatyards now open, a buzz of activity should quickly begin as the calendar nears the month of May.

It felt like a giant gorilla was taken off my back, said a relieved Ken Morse, the proprietor of Tight Lines Tackle in Sag Harbor, as he addressed the lifting of the ban on marinas and boatyards to recreational boaters. It came just in time as the fishing is beginning to start up.

Morse, who is now entering his 20th year in business on Bay Street, was pleased to report that striped bass have showed up in force on the ocean beaches, as well as in the Peconics. The action from the ocean beach has been good, with plenty of schoolie-sized fish, but a keeper or two has been landed too.

On Sunday morning, Greg Ferraris of Sag Harbor took a trip to Jessup’s Neck to jig up about a dozen striped bass between 18 and 24 inches that were gorging on bunker being tossed about in the turbulent rip. The father and son team of Erick and Max Goralski of Noyac were also out on their craft that morning and did an equally fine job on catch and release action.

“The bass are in and the size should increase on a daily basis,” added Morse. “It looks like a great season ahead.”

Morse has expanded his hours of operation. He is now open from 8 a.m. to 4 p.m., Thursday through Monday. The avid angler is fully stocked with all baits, and just received a large shipment of St. Croix fishing rods, as well as other items that are bound to make any angler smile, and any fish wary.

“There are small stripers in the ocean wash with a few keepers in the mix, and I even heard that some early-runner bluefish showed up off Accabonac,” said Harvey Bennett at the Tackle Shop in Amagansett. Bennett, who is entering his 40th season in business this year, said that bunkers have been coming in thick for several weeks, a harbinger of better fishing ahead.

On a drive in Amagansett on Sunday morning, he also observed an adult bald eagle with a bunker in its talons. “Hope springs eternal, but what the country is going through these days is something that we have never dealt with. It’s been tough for many. But seeing that eagle was really cool.”

Bennett added that a few early-arrival squid have been jigged from the dock in Fort Pond Bay in Montauk, and that a few porgies have made their presence felt. “And don't forget the freshwater fishing,” he added. “Some nice pickerel, largemouth bass, and

walleye have been taken in Fort Pond in downtown Montauk.”

Bennett is in the process of finalizing his store hours for the season, but if you have any immediate questions for the veteran store owner, you

Finally, anglers should take note of several changes on some fish regulations for the 2020 season. Most notably, while the striped bass season started on April 15, a slot limit has been put in place. Fishermen can still retain one fish per day, however it must be between 28 and 35 inches in length. The season concludes on Dec. 15.

While the season for flounder is now open until the end of May, if blackfish are on your menu, you better act quick as the season closes on April 30. Fluke aficionados are looking forward to the May 4 opener when four fish over 19 inches can be retained. Want to keep a porgy for dinner? The season is currently open with a limit of 30 of the silver-slabbed fish over nine inches in length.