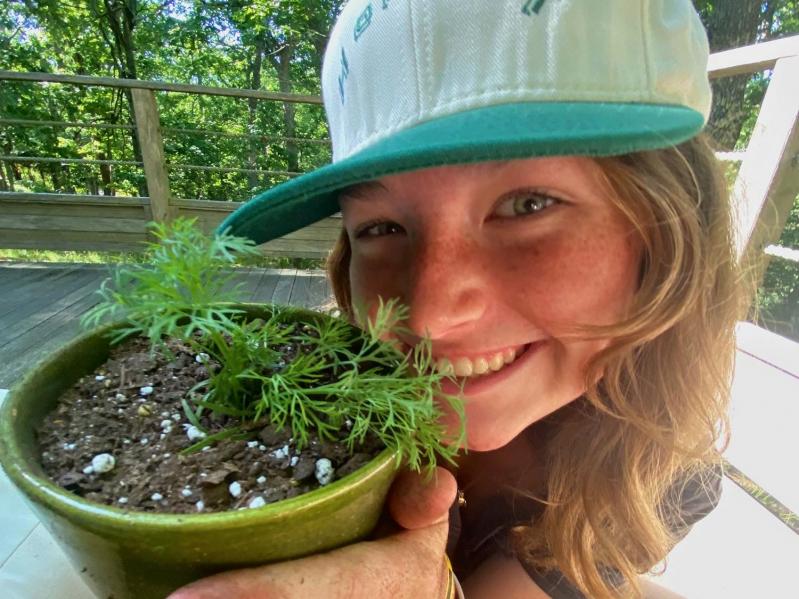 Sadie Cober showed off some of the homegrown dill that she and her co-picklers, Ava Arcoleo and Ava Zeledon, are using to make pickles.
By Christine Sampson

Ava Arcoleo, Sadie Cober, and Ava Zeledon have goals for the summer — typical teenage stuff. Getting a head start on college applications. Spending time with friends. Making sure their homemade pickles are as crunchy as can be.

“Our friend group is really into pickles,” Ms. Arcoleo said. “One time, for our field hockey team, we had a dinner and I brought three jars of pickles, and they were all eaten up.”

Ms. Zeledon said she used to hate pickles. “But this summer I gave them a shot again, and I was hooked.” After observing a friend’s mother make them, “I said, ‘This seems easy enough, we should make our own,’ ” she said.

Lisa and Bill’s Farm Stand in Wainscott sells them their Kirby cucumbers — or, simply, “Kirbs,” if you’ll take note that Gen Z likes to abbreviate words — along with dill and garlic. This little pickle fam seems to have found the perf combo, because they sold out of dill pickles by Tuesday this week. (If a taste test of their spicy variety is any indication, they’re on their way to becoming pickle pros.)

Along the way, they’ve gotten help from other pros, including Ms. Cober’s mother, Christy Cober, who is a partner in the Honest Man Hospitality group, and Juan Juarez, a chef at one of Honest Man’s restaurants, Coche Comedor in Amagansett. They even borrow the kitchen there to prep their pickles, to comply with rules for food safety.

The three friends began with a recipe they found online, but it wasn’t quite right. “They were really sweet,” Sadie Cober said. “And the recipe called for waiting two weeks, but I talked to Chef Juan at Coche, and he said, ‘Come in and I’ll teach you.’ This recipe has no sugar. It’s equal parts vinegar and water, so it tastes even — nothing is overpowering.”

So far, the picklers are having a great time while also getting a crash course in running a sustainable business.

“We’re learning a lot of money management,” said Ms. Zeledon, who hopes to own a cafe someday. “At first we said we are going to make so much money that it’ll just be pouring in, but we realized we have to put money in before we see it coming back.”

They often gather glass jars from other products, sanitizing them thoroughly before repurposing them for pickling. They also collect the jars back to reduce waste.

Their “drops” (a Gen Z word that basically means “this product is available”) are made via their Instagram account, @kooky_kirbs; a direct message on the app is all it takes to order.

Mashashimuet Park's History and Future
A Conference for Young People to Create Solutions
Get Outside, Get Moving
END_OF_DOCUMENT_TOKEN_TO_BE_REPLACED