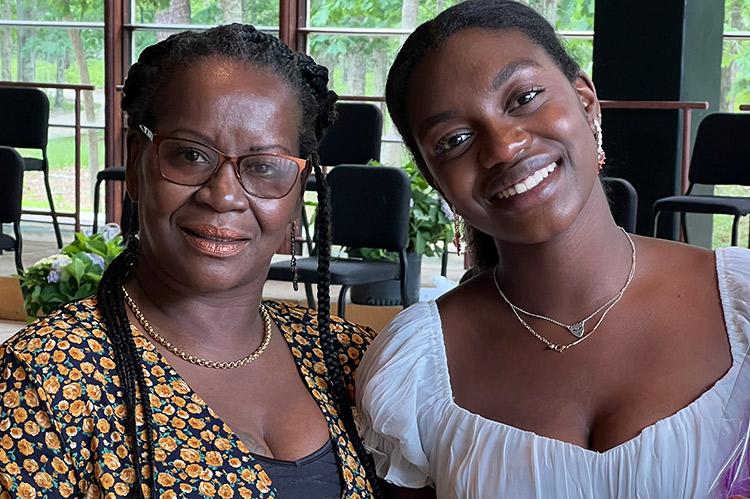 Morgan Johnson Quamina, a 2022 Ross School graduate, is headed to the Massachusetts Institute of Technology in the fall to study math. M.I.T. had a 3.96-percent undergraduate acceptance rate for the 2022-23 school year — making it the third-toughest school to get into among colleges and universities in the U.S. that publicized this year’s admissions rates.

While Morgan’s acceptance at M.I.T. is an achievement on its own, it’s worth also mentioning her other college options. She got into Harvard (3.19-percent acceptance rate), Yale (4.46 percent), Brown University (5 percent), Northwestern (7 percent), Duke University (6 percent), and Boston University (14 percent) — all among the top 30 colleges with the lowest publicized 2022 acceptance rates, according to InGenius Prep, a group of admissions experts formed in 2013 at Yale.

And throughout the process, Morgan has remained humble, saying in a recent interview, “I know this admissions cycle was hard for a lot of people and that I’m definitely in the minority.”

Her journey started, however, with a hard lesson in rejection. A resident of Brooklyn, Morgan missed the cut for her top high-school choice, the magnet school Brooklyn Tech, a public school that requires high scores on an entrance exam. Soon after, she got rejection letters from six boarding schools.

“To this day I don’t know how that happened,” she said. “I was really hung up about it, but I ended up applying to Ross. I got into almost every college now, which sort of makes up for before. . . . It was almost meant to happen, after I got rejected from all the boarding schools.”

Her arrival at Ross wasn’t an easy transition, but once she found physics, her high school career began to pick up momentum, and science and math became passions. She studied neuroscience and biomedicine for two summers through New York University, and got into the Summer Academy for Math and Science at Carnegie Mellon. She also established an American Sign Language and dance club at Ross, was a cheerleader for two years, and graduated with a Leadership Award and as an Advanced Placement Scholar with honors.

But from December into January, Morgan thought she was going to relive the experience she had had with her boarding school applications. With a rejection letter from Stanford University in hand, “I felt like I did everything wrong. I was really stressed out because I had no college acceptances at that moment and a lot of my friends did.”

She chose M.I.T. after a weekend visit for admitted students. The festivities lasted exactly 3.14 days — that’s the important mathematical concept of pi — a fact which Morgan, who had applied as a math major, found hilarious. She even received a partial scholarship. And she said she “didn’t want to go to a school just for the name,” so she opted out of going to Harvard.

“I wasn’t really thinking about which is the best math program in the world. . . . I was more worried about where I’d be happy,” she said, “and it turned out that the place I would be happiest was the best in that subject.”

Morgan’s mother, Marcy Johnson, a single mother living in Brooklyn, said she is “very proud and excited for what’s ahead” for her daughter. “She’s kept her head down and has been a good child in general. She’s very focused on what she wants. I’m happy for her.”

Asked what advice she has to offer younger students, Morgan recommended getting an early start on admissions essays in the summer before 12th grade — especially for Ross School students, who usually find themselves swamped with senior projects almost as soon as September arrives.

Morgan also recommended getting involved in one’s community “not for the sake of college applications, although it does help, but actively be involved to help people out,” she said. “If you do something that you’re passionate about, and you do it well, that will be enough to go where you want to go.”