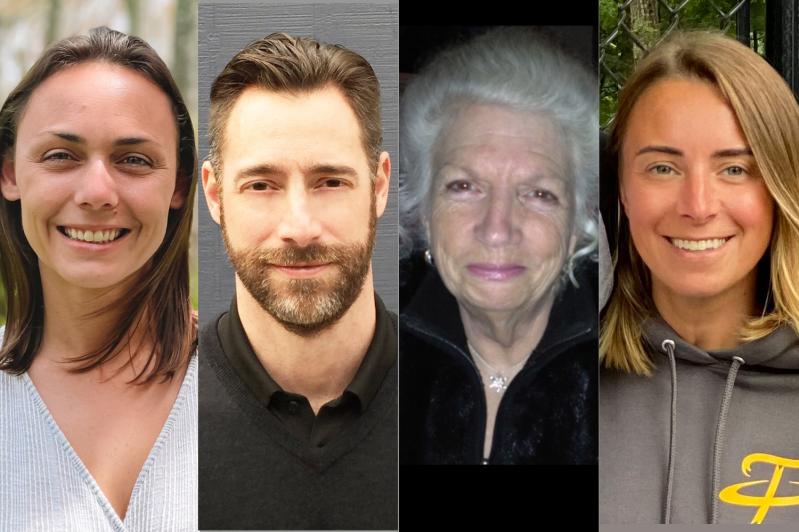 Running for a school board seat in Springs this year are, from left, Summer Romeo, Erik Fredrickson, Hella Drew, and Emma Field.
By Christine Sampson

This year's race for two seats on the Springs School Board features four candidates, none of them incumbents, meaning that two newcomers are destined to be elected.

The candidates are Hella Drew, who ran unsuccessfully for a board seat last year; Erik Fredrickson, Emma Field, and Summer Romeo.

Ms. Drew is a retired real estate appraiser who says she is "very familiar with aspects of assessment and school taxes." She has lived in Springs since 1950; her two sons both attended the Springs School. Over the years, she said, she has kept abreast of happenings in the district, and decided to make another run for the board in order to help find ways to increase revenue and lower the tax burden on residents.

Specifically, Ms. Drew wants to push for state legislation that would enable East Hampton Town to tap into the Community Preservation Fund for money for the Springs School District. She ran on the same platform last year. She described the $16 million bond that funded the school's major renovation and expansion project as "a burden" that "is going to cost us for the next 20 years." C.P.F. money, she said, "would really help the community."

The East Quogue School District, whose tax base includes many acres of Central Pine Barrens land, has been the only beneficiary to date of the legislation that Ms. Drew cited. The law, passed in 2015, allows specific school districts and fire and ambulance districts to receive payments in lieu of taxes because the Pine Barrens is not taxable property. Assemblyman Fred W. Thiele Jr., who sponsored that bill, said this week that there is another one, in the very early stages of committee review, that would extend similar support to districts outside the Pine Barrens "where there is a finding of financial hardship."

Ms. Drew said she would monitor school spending so that "it's spent in the right departments and for the right reasons. I would keep a closer look at their budget."

Erik Fredrickson is making his first run at elected office. A parent of three who has lived here full time for 19 years, he said this week that his goal is to ensure "a sustainable future" for the district, including both students and the community. Professionally, he is the chief executive officer of the Frederickson Consulting Group, which works with businesses and organizations to "enhance leadership practices and build strong teams."

Mr. Fredrickson is active in the community as a volunteer youth sports coach and as chairman of the Parrish Art Museum Business Council. In Springs, he sat on the school's health, safety, and facilities committee that advised on its Covid-19 reopening plans. He is also a fitness coach who has led wellness programs at the Eleanor Whitmore Early Childhood Center and East Hampton High School, among others.

He is running on a three-pronged platform: Enhancing social and emotional learning for kids and school employees; looking holistically at the mastery of reading, writing, math, and science so that students aren't focusing solely on standardized test preparation; and developing more opportunities for wellness that "create space to take care of ourselves." He has "a listening approach" to problem solving, he said, and would hope to gather feedback from the public that will inform decision making.

"I'm taking on something that I strongly believe in," Mr. Fredrickson said. "I think I have a very balanced perspective, as someone who professionally has the experience in leadership, team building, and working with educators. Also being a father of three children, I have a huge stake in the game."

Ms. Field and Ms. Romeo are running together as a slate.

Ms. Romeo said she was motivated to run for the school board after her family had a difficult time with the Springs prekindergarten program. The mother of two, she has a background in finance and economics, including a Wall Street internship and accounting experience in the construction industry locally.

Born and raised in Sag Harbor, she moved to Springs in March 2020. She has served on the board of directors of the Rainbow Preschool, a nonprofit prekindergarten facility that closed last year when the Sag Harbor School District opened a full-day pre-K program. She was also a member of the Sag Harbor Volunteer Ambulance Company and the treasurer of the Sag Harbor Food Pantry.

"If you have a kid, I think you have to get involved" in school happenings, Ms. Romeo said. She would like to see a school nurse in place, specifically for the school's pre-K programs, and to see the curriculums of those two separate programs more closely aligned. She would also like to implement more Spanish-language classes in the youngest grades, and to revive a gardening program that was halted when the building construction began.

"I really want people to feel heard," Ms. Romeo said. "I want you to be able to email me or pick up the phone and call me . . . I feel like right now there's a little bit of a lack in that. I want to be approachable."

Ms. Field was born and raised in East Hampton, "with the most wonderful childhood memories." A mother of three, she and her family have lived in Springs for 11 years. She graduated from the Savannah College of Art and Design in Georgia and worked at a tech and wellness company for seven years before joining her family's general contracting business six years ago. She describes herself as "a very constructive thinker and problem-solver."

She is running for the board, Ms. Field said, because she has "a lot of questions about how the school is run, how decisions are made, how the budget is monitored and decided on -- and there seem to be a lot of parents and community members that feel the same way. I don't think there's a better way to get involved than to run for a seat on the board to be able to get a clear understanding of issues that may need attention or a fresh outlook to continue to keep Springs School great."

She would like to see more transparency in the district and to create "a more cohesive, positive environment in the school." If elected, she said, she would be "a fair, empathetic board member who will truly listen to the ideas and opinions of parents and teachers and take them into consideration" even when her own thoughts differ.

"I don't complain about something unless I am going to put the effort in to try to make change," Ms. Field said. "I am also not agreeable just to be agreeable -- I am running for a seat on the board because I think it needs people that want to be there to make a difference . . . and there won't be any changes by falling in line with the current processes."

Voting is from 1 to 9 p.m. on Tuesday in the Springs School library. Also on the ballot is a proposed $32.89 million budget and two additional propositions, covered separately in this week's issue.