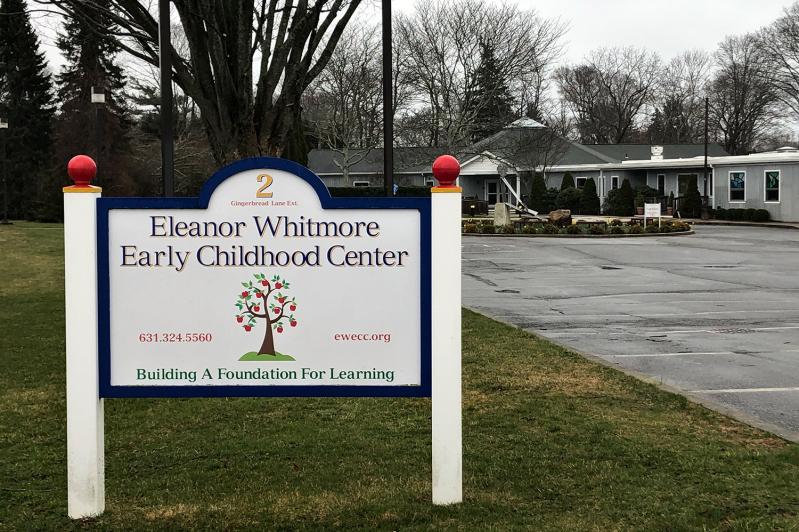 The Eleanor Whitmore Early Childhood Center sought funding from the East Hampton School District, but was turned down this week.
Durell Godfrey
By Christine Sampson

Finding itself at least $300,000 short on revenue, the Eleanor Whitmore Early Childhood Center petitioned the East Hampton School District to add $250,000 to its upcoming budget vote to support day care and prekindergarten for its 100 students, most of whom will one day attend school in East Hampton.

This rare “community-generated” type of petition, however, was rejected on Tuesday by a 5-0 vote of the school board, on the grounds that it failed to comply with state education law and school district policy.

Tim Frazier, the director of the Whitmore Center, said after the board voted that the money would have gone a long way toward resolving the shortfall. The petition was modeled, he said, after measures in the Southampton School District — where Mr. Frazier was a principal for 20 years — that allow the community to approve money for the Parrish Art Museum, Southampton Youth Services, and Southampton Town Community Center.

“It’s something that’s never been done before” for the Whitmore Center, Mr. Frazier said, “but I felt like it fit the guidelines, and I thought why not try and see if there is a possibility?”

He gathered the necessary 25 signatures of qualified district voters and filed the paperwork on April 13, five days ahead of Monday’s deadline. On Friday, April 15, Kerri Stevens, East Hampton’s district clerk, published a notice of a special meeting of the school board to consider the Whitmore Center proposition.

The school board’s attorney, Jonathan Heidelberger of Frazer and Feldman, recommended the board vote no.

“What has been submitted lacks . . . compliance with policy, law, and, perhaps most importantly, it seeks to ask the voters to do something, authorize something, which is not within their power,” Mr. Heidelberger said, citing multiple statutes.

State education law says that such a proposition can be rejected if “the expenditure of moneys is required by the proposition” but “fails to include the necessary specific appropriation.”

As read into the record by J.P. Foster, the school board president, the Whitmore Center’s proposed measure did not appear to include the specific amount of money being requested. Mr. Foster declined to comment after the meeting.

Mr. Frazier, himself a member of the Springs School Board, said he was unaware that the board was holding a special meeting this week.

The Eleanor Whitmore Center, originally established about 50 years ago as East Hampton Day Care and the region’s first official Head Start program, relies primarily on tuition to support its operations. However, it strives to keep rates as affordable as possible. Most families pay $325 per week per child (or $1,300 per month), which is less than the average cost of child care in New York State. According to the Center for American Progress, those numbers are $1,471 for toddlers and $1,872 for infants.

At Eleanor Whitmore, 20 percent of families receive a need-based scholarship of $75 each week toward the tuition cost, meaning tuition is $250 per week, or $1,000 per month.

The center’s operating budget is about $2 million annually, coming from fund-raising in which tuition dollars fall short, Mr. Frazier said. Enrollment is 100 students, and there are 100 more on a waiting list.

The center also operates a food pantry that supports 45 families each week. It is one of the original members of an umbrella organization, the East End Fund for Children, which brings together nonprofit groups for collaboration and advocacy across the region.

“I’m not going to give up on it. This was a first shot at it,” Mr. Frazier said. “I will continue to look for ways to support our center, because it is a very important part of the community.”

Mashashimuet Park's History and Future
A Conference for Young People to Create Solutions
Get Outside, Get Moving
END_OF_DOCUMENT_TOKEN_TO_BE_REPLACED