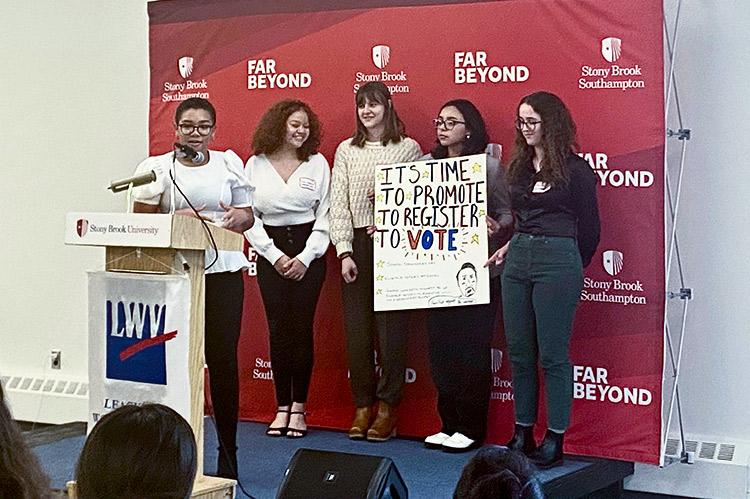 Chloe Swickard, far right, a junior at East Hampton High School, joined her teammates from neighboring high schools to offer their ideas on how to attract young voters.
Judy D’Mello
By Judy D’Mello

At precisely the moment last Thursday when the United States Senate voted to confirm Ketanji Brown Jackson as the first Black woman on the Supreme Court, about 45 female students from nine East End high schools were gathered in the cafeteria of the Stony Brook University Southampton campus to learn about the roles of female elected officials in politics.

“Running and Winning,” a workshop on the voting process, government participation, and community advocacy, was hosted by the League of Women Voters of the Hamptons, Shelter Island, and the North Fork. The timing could not have been more perfectly synchronized with the historic events unfolding in the nation’s capital: Gender, race, and diversity were the talking points being discussed in Southampton.

As Vice President Kamala Harris presided over the Senate chamber during the landmark vote — hers would have been the deciding ballot in the event of a tie — the students were listening to inspiring experiences of high-ranking female officials on the East End.

Minerva Perez, the executive director of Organizacion Latino-Americana, who was the keynote speaker, spoke about working as an advocate and the pathways to broader civic engagement. Ms. Perez underscored the importance of politicians’ reaching out to a more diverse population, citing the fact that the student bodies at the 24 school districts on the East End are 45 percent Latino.

The League of Women Voters is a national nonpartisan, grassroots nonprofit represented in all 50 states, with over 750 chapters across the country. This participatory event is held annually on the East End, although it was canceled last year due to Covid. Its aim is to educate and empower women to fully participate in the country’s democratic process.

“We want to engage young women and present the possibility of running for elected office,” said Susan Wilson, the co-president of the local chapter of the League of Women Voters.

The majority of Thursday’s participants were under 18, the legal age to vote, but League of Women Voters officials and guest speakers reminded the girls about their right in New York State to preregister to vote at the age of 16. They were also offered a quick lesson in filling out voter registration forms — stressing some common pitfalls to avoid — and told the mail-in-vote deadlines for the June primaries.

Then, the girls broke off into smaller groups of five and six, with students from different schools represented, to brainstorm ideas that they could implement back in their districts, in the hope of reaching and educating younger and more diverse members of the campus population. After lunch, each group presented their ideas to the audience.

“We feel energized hearing what students will do in each of their schools,” Ms. Wilson said.

Many of the ideas presented involved channeling youth voters through social media, often considered the next frontier of political campaigning. Students discussed using platforms such as TikTok, creating memes, tapping into Olivia Rodrigo songs, or even hosting Zoom workshops. They came up with clever hashtags and talked about using notification buttons to remind young people to campaign or vote. One group went old school and suggested taking out advertisements in the school newspaper. Another proposed field trips to places like Town Hall, to help younger members of the community understand what elected officials do and the power they wield. Almost all of the groups touched on the importance of multilingual messaging and the need to simply have a conversation among one’s peers about the importance of voting.

Sanaya Morris, a sophomore from Southampton, who is part of the Shinnecock Indian Nation, spoke about the need for increased education of voter rights, the lack of which, she said, is a big reason why many of her tribe members do not turn out to vote.

Chloe Swickard, a junior from East Hampton, said she considers herself a civic-minded person and that the workshop offered the perfect opportunity to meet like-minded students and learn more about government and politics.

A few moments after the young women boarded their school buses to head home and ponder their roles as political ambassadors and cheerleaders, President Biden Tweeted a photo taken with the newly elected Supreme Court justice at the White House, with this message: “Judge Jackson’s confirmation was a historic moment for our nation. We’ve taken another step toward making our highest court reflect the diversity of America.”

Mashashimuet Park's History and Future
A Conference for Young People to Create Solutions
Get Outside, Get Moving
END_OF_DOCUMENT_TOKEN_TO_BE_REPLACED