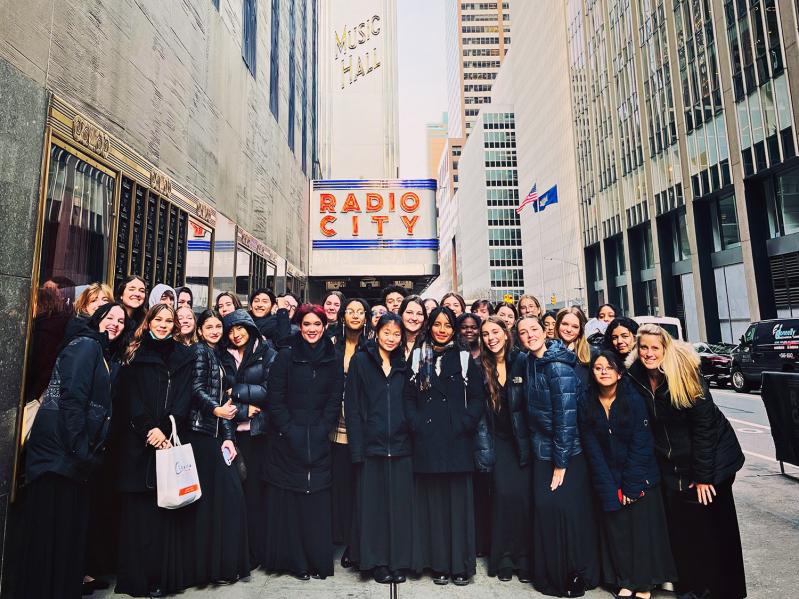 There are 36 members of the Radio City Rockettes, and 36 members of East Hampton High School’s Camerata choir. Coincidence? Yes, definitely. But both groups took the stage at Radio City Music Hall last Thursday, with the East Hampton singers serving as opening act for the Rockettes in a thrilling six-minute performance that made for quite the harbinger of Christmas spirit.

“That was the biggest performance I’ve ever done,” said Kayla Lester, an East Hampton senior in her third year in the group. “That was the biggest stage in the world. You step onto the stage and realize it’s the size of half the high school football field — it was huge. It was really cool.”

About 150 people traveled from East Hampton to Manhattan to support the Camerata. The students also got a backstage tour and met a Rockette.

It started with an audition tape from the school’s spring choir concert, submitted by Melanie Freyre, the high school choral teacher. By June, she had secured the opportunity for the Camerata, an elite coed group of East Hampton singers admitted by audition. She delivered the news when school started again in September.

“We came from, in Covid, not being allowed to sing in class — no concerts — so these particular students really are bringing the life back to the program,” said Ms. Freyre, who also coached the East Hampton Middle School’s Bonettes to a similar appearance at Radio City in 2019. “They really are taking the musicianship to the next level, and people are starting to notice that this may not be your typical high school choir.”

There were just two rules for opening acts at Radio City this year: Performances had to be a cappella, and they had to include holiday songs. So the East Hampton group sang an original for the occasion, “Bells of Christmas,” an arrangement by Ms. Freyre herself, along with a traditional four-part madrigal rendition of “Deck the Halls” and a version of “Have Yourself a Merry Little Christmas.”

“I had to find something that was going to be right for them. I didn’t want to just pick anything. I went off some things that I heard and found . . . to display them in the best light possible,” Ms. Freyre said.

It was also the first time that her daughter Ella, 4, saw her conducting a choir. “This was pretty special,” she said.

The students were “prepared and comfortable,” Ms. Freyre said. “The magnitude of performing for 6,000 people on one of the most famous stages in the world was definitely, for all of us, a pretty tremendous moment.”

Adriano Rangel, a sophomore, said the experience was “absolutely amazing and unforgettable.”

“The excitement and pride that I felt as I stepped out onto that stage were indescribable,” he said. “The Camerata was able to deliver a fantastic performance that I am extremely proud of, and the feeling of accomplishment that came with it was truly special.”

“The idea of performing on such a famous stage was intimidating for sure,” said Ava Arcoleo, an East Hampton senior. “Thousands of people were watching and we wanted to give them something great. We’ve been traveling around as a group to many community performances — an L.V.I.S. meeting, trips to the Montauk School to inspire future singers, even just opening for our winter concert — leading up to this big one, though, and I think all that ‘practice’ really paid off. When we got up there, we weren’t nervous, just excited to share what we’ve been working on.”