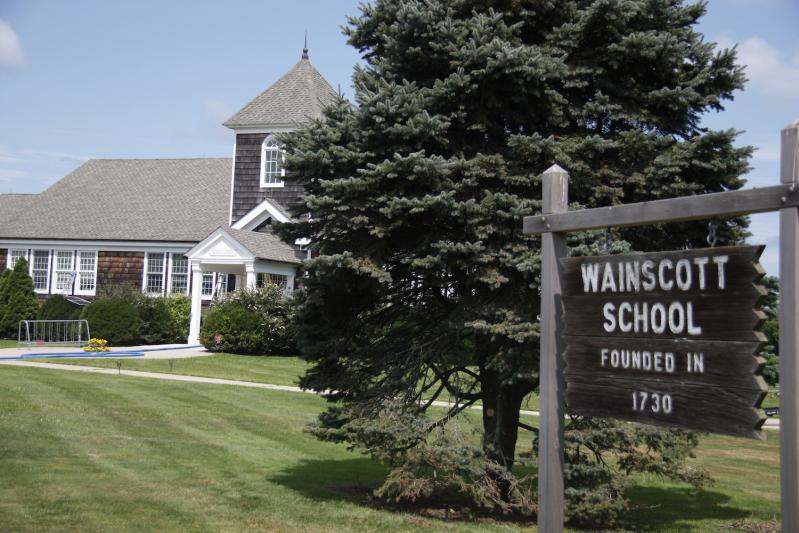 The Wainscott School spends 33 percent of its budget educating children in kindergarten through third grade in its two-room schoolhouse, and sends older students to neighboring districts on a tuition-paying basis.
Durell Godfrey
By Christine Sampson

Here’s how tight for cash the Wainscott School District is: In October, the tiny district closed the books on the 2021-22 school year having spent nearly every dime in its $3.83 million budget. There was no significant end-of-year surplus to speak of.

School districts rely heavily on end-of-year surpluses, or “fund balances,” as they are commonly called, to pay for unexpected costs. The lack of a consistent fund balance — which New York State caps at 4 percent of the prior school year’s budget — can signal trouble. The district hasjust about 4 percent now, but David Eagan, Wainscott’s school board president, said the situation was “extremely unusual.”

“We went right up to the line. It was a very tight year, there’s no doubt about it,” he said by phone on Tuesday. “These were the changes that we were talking to our voters about last year. We’ve had significant increases in special education expenses . . . and we’re actually experiencing some again this year.”

The Wainscott School spends 33 percent of its budget educating children in kindergarten through third grade in its two-room schoolhouse, and sends older students to neighboring districts on a tuition-paying basis. School officials analyzed last year’s budget and found that 63 percent of it was spent on out-of-district tuition and transportation. The remaining money was spent overseeing the Ross School’s special education programs, as required by state law for private schools that fall within district borders. Other schools reimburse Wainscott for their students’ services, but it often takes a year for those refunds to flow back into district coffers.

During an Oct. 19 school board meeting, the three trustees voted to approve more than half a million dollars — $535,197, or about 14 percent of the district’s overall spending — in budget transfers, to address negative balances in some areas.

State auditors have in the past chastised Wainscott for hanging on to more fund balance than state law allows. During the last few fiscal years, Mr. Eagan said, that led the district to spend the surplus down by using large chunks of it to offset rising costs — meaning there isn’t as much money now to cover fluctuations in out-of-district tuition and special education costs.

Because of Wainscott’s size — it essentially employs two full-time teachers, one full-time teaching assistant, a full-time clerk, a part-time superintendent, and a handful of part-time service providers for 26 children in the schoolhouse — it does not receive state education money. According to the official Oct. 19 meeting minutes, Deborah Haab, the district superintendent, said she was “working on a grant to help offset special education expenses.”

In other Wainscott School news, the district is looking to hire a new parttime gym teacher, but has had significant trouble finding candidates. According to the minutes, Ms. Haab has inquired with the neighboring Sagaponack School District to see about sharing a physical education program or staff member.

“We keep advertising it and can’t find anyone,” Mr. Eagan said, recalling a time, in 2015, when the district received more than 1,200 applicants for a single classroom teaching job. “Now, if you get 10 applicants, you’d jump up and down thinking you hit the lottery.”