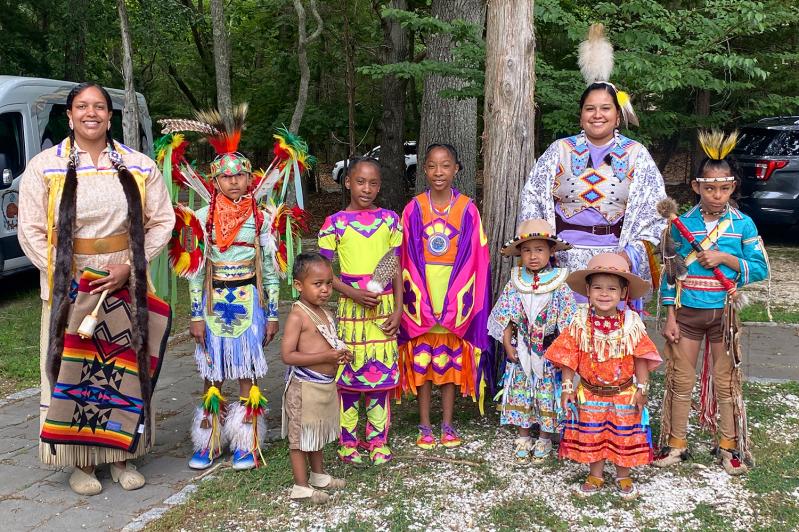 A group of kids and adults from the Shinnecock Indian Nation will demonstrate traditional tribal dances and drumming at the Children’s Museum of the East End in Bridgehampton on Saturday.
Jess Frost/Courtesy Arts Center at Duck Creek, East Hampton
By Christine Sampson

In the heart of the Shinnecock Indian Nation reservation, a newly renovated clubhouse for kids and teens has been bustling with activity since it opened its doors in April.

There, the Boys and Girls Club of the Shinnecock Nation, which was chartered under the national organization’s Native Services Division in September 2021, takes part in activities such as skateboarding, arts, sports, yoga and meditation, and science lessons. But the kids have also been diving deep into the Shinnecock culture by learning traditional dancing, singing, and drumming, making regalia, and immersing themselves in the tribe’s history, language, and spiritual beliefs.

On Saturday, traditional Shinnecock dances will be the focus of an interactive presentation at the Children’s Museum of the East End in Bridgehampton.

“It’s all about learning how to be able to share and learn from each other, which I think is so important and is missing in the world today,” said Dyashwa Sylvester, director of the Shinnecock Boys and Girls Club chapter.

Visitors to CMEE will see the Shinnecock youth perform several styles, such as the eastern blanket dance, jingle dress dance, and fancy shawl dance, which are traditionally performed by women and girls, as well as the eastern war dance, grass dance, and fancy feather dance, which are performed by men and boys. Then, visitors will be invited to take part in round dances and stomp dances.

“A round dance is considered a friendship dance. We’re all holding hands and moving in a circle,” Ms. Sylvester explained. The stomp dances are done “just for fun. It’s basically like you’re dancing in a line and following the person in front of you. . . . It’s also a call-and-response dance.”

Saturday’s performance is a first for the Shinnecock youth at CMEE. It starts at 10:30, is free to attend, and is appropriate for all ages. These types of activities are “a door that we leave open for the future” with an eye toward education and collaboration with the community at large, Ms. Sylvester said.

The bigger context, she said, is that it will help people understand that “we are still here and we’re not going anywhere.”

The Boys and Girls Club initiative “really strengthens the entire Shinnecock community because the youth are our hearts,” Ms. Sylvester said. “We’ll do anything for our youth. We say it a lot in this community, but up until recently, it wasn’t done enough. Now they know they have somewhere to go and have something to do. It empowers and uplifts them.”