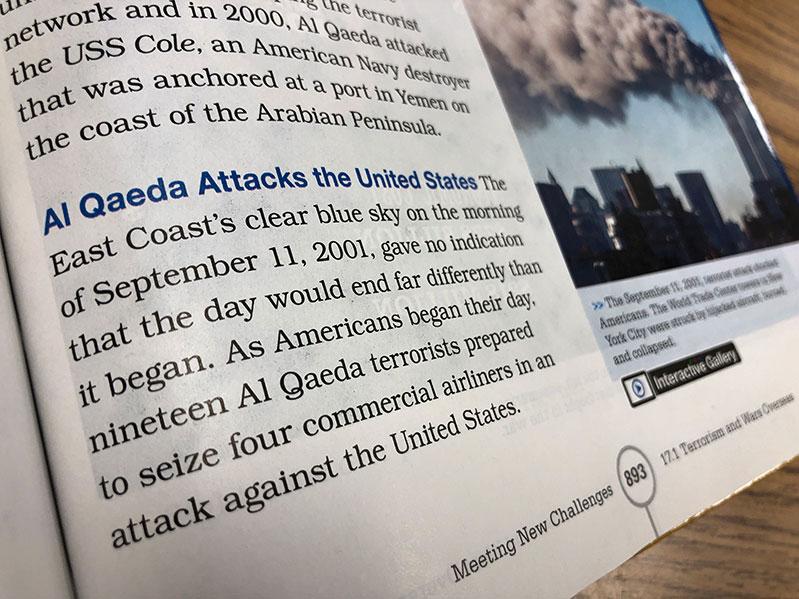 Students in local school districts can expect moments of silence tomorrow morning to remember the lives lost in the terrorist attacks of Sept. 11. It was during one of those moments that Bea Flight first learned about that day. She was 7 and a first grader at the Montauk School.

"Our principal made an announcement, and we took a moment of silence. I think we watched an educational video," Bea, now a seventh grader, recalled this week. "In first grade, it was a bit more watered down, but as I got older, they showed us more of what it really was and how tragic it was."

During and after the Sept. 11 terrorist attacks, people relied on newspapers, broadcast news, editorials, and documentary films to deepen their understanding of what was happening. Adults were living the reality of what is now a lesson learned by children in schools, where age-appropriate textbooks, worksheets, assignments, and classroom discussions are underscored by the teachers' own experiences and sensitivity.

"I have a wonderful faculty and they know what to do. They know what's best for the kids in their room," said Jack Perna, the superintendent and principal of the Montauk School.

For three years, William Barbour, who teaches Advanced Placement U.S. history for juniors and Advanced Placement government and politics for seniors at East Hampton High School, accompanied the junior class as the entire grade took day trips to New York City to see the National September 11 Memorial and Museum. It's an opportunity to "tap into some emotions and critical thinking," he said.

"As teachers, we have now a group of kids who weren't even alive then. Some have stories through their parents, but a lot of them really don't know much," Mr. Barbour said. At the memorial and museum, he said, "There's this whole centerpiece with a picture of every person who was killed. There are kiosks where you can type in someone's name and get their biography. The first year we went, kids were kind of just milling around. I realized they weren't really digging into anything. So the next year we went, I gave them an assignment where they had to pick a person, look them up, and find out more about them. They were more affected by the experience. . . . When you can bring it down to that level and explain to them that people were and still are truly affected by this horrific event, it's a different experience."

Jennifer Wilson, a local real estate agent and mother of two who lives in Springs, spearheaded fund-raising efforts to take all the juniors on the trips, which cost about $10,000 each year. "It dawned on me," she said, that her elder daughter "was one year old when 9/11 happened, and that literally everyone in her class and younger will have zero memory of what happened. To me, we have to do something so that the kids really understand."

The Covid-19 pandemic put the trips on hold -- meaning her younger daughter didn't even get to go -- but Ms. Wilson said there is money waiting when the time is right to go again.

Brynley Lys, an eighth grader at the Springs School, recalled hearing about the events of Sept. 11, 2001, for the first time about two years ago. She and her classmates looked at photos, watched videos, and did writing assignments. "When I'm writing about it, it's hurtful, to be honest," Brynley said, "because all those people died that day and it was such a devastating experience for people. . . . It is disappointing to know that something like that happened so close to me."

She said she wants to know more about it. "Teachers are very careful about what they say, making sure not to scare us," she said. "Our school is very protective and makes sure we are safe."

"I do think that history is bound to repeat itself and we need to learn from it, so we do have to talk about it," said Rachel Lys, Brynley's mother.

Caly Stewart, a Ross School graduate who is now a freshman at Cornell University, said she was "fairly young" when she first learned about the terrorist attacks, but that her first time studying the history in-depth came when she was in eighth grade and the first day of school happened to be on Sept. 11.

"My understanding of 9/11 has definitely changed since then," she said. "Because it happened before I was born . . . the lens I saw it through was that it was something that had happened so far in the past and really had no potential of happening again. But now I see how recent it really was and how many people that I know today were affected by it."

"I was really lucky to go to a high school where discussion about events like this was encouraged and they wanted us to discuss it with our peers and do outside research," Caly said.

East Hampton Town Police Chief Michael Sarlo, who was in Manhattan after the towers fell with a unit of East Hampton officers volunteering to help the New York Police Department, has visited East Hampton High School classes to talk about the events of that day.

"That's been a really rewarding and cathartic experience for me, helping [the] younger generation get an idea of how impactful this event was, remembering those lost, and reflecting on my own experiences during that time," Chief Sarlo said in an email to The Star this week.

There's a chapter about Sept. 11 in the textbook that Montauk School seventh and eighth graders use each year to study United States history, published by Pearson in 2016. The book is some 800 pages long; this chapter, titled "Terrorism and Wars Overseas," takes up seven of them.

"On September 11, 2001, members of Al Qaeda, an international Islamist terrorist network, launched an attack against the United States," the chapter starts. "Osama bin Laden (oh SAH muh bin LAH dun) had founded Al Qaeda in 1988. Al Qaeda was based on the idea of jihadism." At the end of the chapter, discussion questions ask students to weigh "the successes and failures of the U.S. war effort in Iraq" and consider why the U.S. faced "criticism about how it conducted the war on terrorism" -- questions that remain relevant today, especially with President Joseph R. Biden's recent evacuation of troops and civilians from Afghanistan.

"I think it's very scary what happened and how horrible it was," said Bea, the Montauk seventh grader. "I feel very sorrowful for the families who were involved and the people in the buildings. . . . I think I haven't gotten the whole story yet. The school gives it to you bit by bit. There are definitely things I can still learn about it, and hopefully I will."