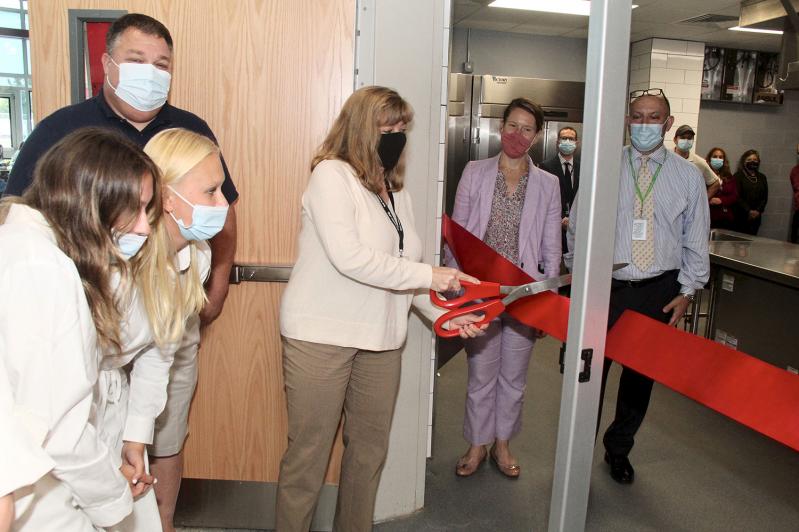 Christina DeSanti, a professional caterer and East Hampton School Board member, cut the ribbon Friday on the high school's new cooking lab as administrators and students looked on.
Durell Godfrey
By Christine Sampson

East Hampton High School's newest classroom isn't the lecturing sort of learning environment. It's a hands-on home for a new culinary arts program: a commercial kitchen lab that will be used to teach and practice cooking, baking, and other aspects of the hospitality industry, readying students for real-world careers in a field high in demand here on the East End.

"I am looking forward to seeing students grow in this field, and in this space in particular," said Kelly Doyle, a family and consumer science teacher who will be leading the classes there. She said the kitchen went beyond her expectations.

"The students were very impressed when they saw the kitchen," she said. "I think most were in disbelief that this would be their new classroom for the next two years. . . . It's highly unique that students in high school get the opportunity to utilize a true professional kitchen such as this one. This is really going to give students insight into the workings of a restaurant or catering kitchen."

With its gleaming new appliances and five prep and cooking stations, the new kitchen fits squarely into the realm of "career and technical education." These days, schools are seeing a need to prepare students for lucrative jobs in fields such as auto mechanics, the building trades, and, of course, hospitality. East Hampton also has an auto mechanics classroom in the works at its new school bus depot, now being built at a former town waste disposal site on Springs-Fireplace Road.

The two-year curriculum was approved by the New York State Education Department on the first go-round, which is unusual, according to Adam Fine, the district superintendent. It was developed by Ms. Doyle and Cathy Tyrie, a business teacher who coordinates career and technical programs. The new program also includes hotel and restaurant management. Students will graduate from high school with a food handler's certificate, college credits, internship experience, and a career and technical education certification on their diplomas.

Sara Smith, the East Hampton High School principal, anticipates that the program will really inspire students who may not thrive in traditional classroom settings. "This type of hands-on learning resonates with students and helps to keep them engaged, not only in their respective programs, but with school in general," she said. "If a student loves what they are doing, they will love being in school, and that is our ultimate goal."

Students will officially begin using the kitchen in November, as there are still a few components being worked on, such as a gas hookup to power some of the appliances. The project was initially expected to cost $2.2 million -- which came from a reserve account dedicated to facilities improvements -- and school officials said there is a chance, barring any unforeseen circumstances, that it may come in under budget.

Christina DeSanti, the school board vice president and a co-owner of the Dreesen's catering company, helped plan the facility. It was at least five years in the making, and came to fruition with the help of Mike Guido, the district's architect, Joe Realmuto of Nick and Toni's restaurant, and consultants from Suffolk Community College in Riverhead.

Ms. DeSanti has seen firsthand the critical shortage of skilled and motivated employees in the industry locally. "For the community, it's a win-win," she said. "Ms. Doyle is the right person to take on the classes. She's amazing and enthusiastic. I think it's going to be a huge success."

Schools are "pulling out shop rooms and putting in computer rooms," Ms. DeSanti continued later. "We already have computer rooms. We're very lucky here in East Hampton. . . . We have children going to every Ivy League school in the nation at this point. And we were lacking in vocational education, just like everyone is right now, but now we'll have two viable vocational programs for our students. We have both ends of our spectrum -- college and career readiness."

There will be room for 15 students in each year of the East Hampton program, which serves as a hometown alternative to classes run by the Board of Cooperative Educational Services in eastern and western Suffolk. Students in those programs, which also include aviation, nursing, cosmetology, auto mechanics, and many others, have to board buses to and from facilities west of here. That means they lose classroom time for electives at East Hampton and often get back from school too late in the afternoon to participate in sports and clubs.

Mr. Fine said the future may also hold evening classes for adults in the new kitchen. Also possible are opportunities for students on sports teams and in clubs to join with their peers in the culinary arts program for the "catering" that may be needed for games and other activities.

Right now there are about 10 East Hampton students enrolled, Mr. Fine said, meaning that in the future, any open spots will be offered to students from nearby high schools, which would pay tuition to East Hampton. So not only is the district poised to spend less money on BOCES tuition and transportation, but it may also bring in revenue.

Administrators and school board members officially unveiled the new kitchen at a ribbon-cutting ceremony on Friday.

"East Hampton puts a lot of kids into BOCES, so it was logical to go down this road," Mr. Fine said this week. "It's amazing. . . . It's unbelievable. It is one of a kind, which is great. The smiles on the kids' faces was a thing to behold."