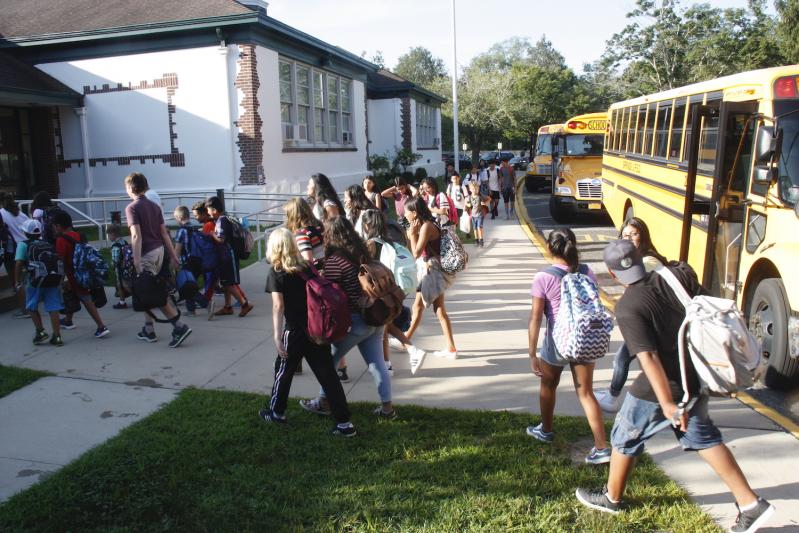 Despite criticism from several teachers last month, Springs School administrators are moving ahead with a plan to move from eight to nine class periods per day, starting in September.

Christine Cleary, the principal, told the Springs School Board on Monday that "after many weeks of toiling over schedules" and looking at new staffing and other academic considerations all across the grades — "which we know can get a little bit complicated" — the decision was made.

"It aligns with the district's mission of providing a robust and well-rounded curriculum for our students and more creative programming," Ms. Cleary said. "We have some good ideas up our sleeves, but we have to work that out over the summer."

Under the nine-period plan, the school's 8:20 a.m. arrival time and 3:11 p.m. dismissal time will not change. What will change is that each of the current eight periods will be shortened by six minutes, down to 43 minutes.

Among other things, Ms. Cleary said, the change will allow the district to comply with state requirements for elementary-grade gym classes, which are currently not being met. Spanish lessons for younger children and sixth graders will return, STEAM activities are a priority, and students in both enrichment classes and academic support programs will once again have room in their schedules for "specials" like art class.

Students will have three lunch periods instead of two, making recess "safer and age-appropriate. Right now, we have some of the little guys running around with our middle school students," Ms. Cleary said. The goal is to "decrease the number of bodies out at recess at one time and increase the staff-to-student ratio" for supervision.

In May, when the principal first introduced the plan, some teachers expressed concern that valuable class time in core subjects and special education might be lost. In an eight-period day, "students have the ability to do more things with one subject. There's more time for one content area — we can devote more time to a hands-on lesson," Monique Sullivan, who is both a teacher and a parent at the school, told the  school board on May 10.

Tim Frazier, a board member who is a former Southampton Inter-mediate School principal, said that "kids are going to have a little less per period, but I think they'll have a much more enriched schedule than they did before."

Sean Knight, a science teacher who is co-president of the Springs Teachers Association, said Tuesday that the union had no formal response to the plan yet. "Our executive board needs to discuss [it] first," he said by email.

Administrators have tabled, for now, a proposal to turn one Friday per month into a half-day for classes, aimed at giving more group-planning time to teachers.

School officials also announced the start of summertime curriculum-writing sessions with teachers. New state standards for science, physical education, and social studies, including a new "civics" initiative, are coming soon, Ms. Cleary said, so the district will need time to build lessons around those mandates.

"I'm so happy that finally there is the time to get around to this and take a real look at it," said Barbara Dayton, the school board president. "It's been on everyone's mind, I think, including the board, and it sounds very promising."

The board also decided that Springs should opt in to a state pilot program allowing a certain number of traditional snow days to be changed to remote-learning days, giving schools more flexibility in scheduling.

"We had a very long Memorial Day weekend because we went remote on the snow days" this year, noted Debra Winter, the superintendent. "The state allows it as long as your remote instruction is similar to in-person."

The board next meets on June 21 at 7 p.m., which will likely be an in-person meeting.