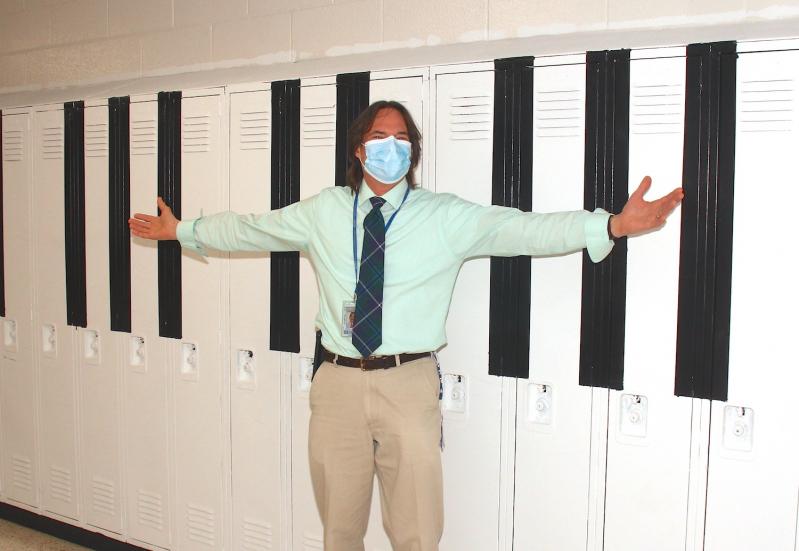 Troy Grindle, who has coordinated East Hampton's music curriculum and programs for 11 years, stood in front of lockers that students in the Tri-M Music Honor Society have painted to look like piano keys.
Durell Godfrey
By Christine Sampson

The East Hampton School District's student musicians and music teachers have again been recognized for excellence by the National Association of Music Merchants, along with 685 other school districts from all across the country, in 2021.

NAMM's Best Communities for Music Education lauds schools for their "innovative and resourceful music education programs." This year represents East Hampton's sixth straight such award. Other nearby recipients this year include the Southampton and Hampton Bays School Districts.

"Our teachers put in the work and our students are so dedicated," James Crenshaw, East Hampton High School principal, said in an interview last week.

All John M. Marshall Elementary School students are exposed to music as part of their weekly schedules, and there are more than 460 students specifically enrolled in band, chorus, and orchestra programs across the three schools this year, according to Troy Grindle, who has coordinated the district's music curriculum and programs for 11 years.

Highlights of East Hampton's programs include its chamber orchestra, the Far East Fiddle Club, jazz band, award-winning musical theater productions, and groups such as the Manly Men, Camerata, and Belle Voci at the high school and the Bonettes at the East Hampton Middle School, several of which are by audition. The district also has a chapter of the Tri-M Music Honor Society.

Being a "best community" is "about the school, but it's also about the support of the community, which in East Hampton has been remarkable," said Mr. Grindle, who will retire in June after 32 years of teaching in the district. "The staff of this music department is absolutely incredible. It's really their work that is being recognized here as well. . . . This is a team effort."