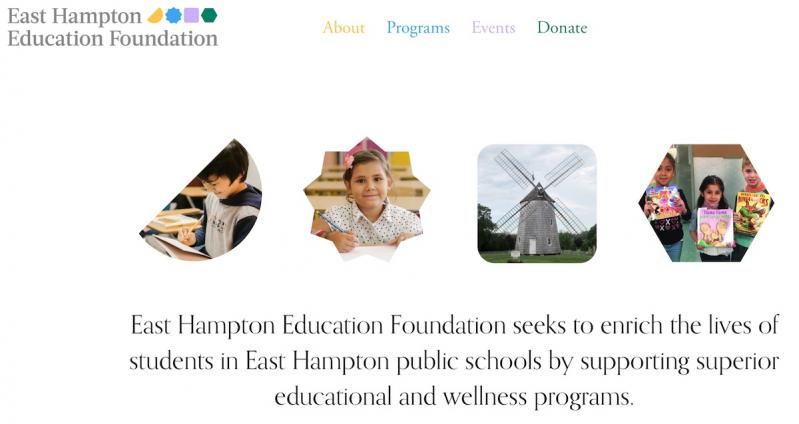 A screenshot from the East Hampton Education Foundation's new website.
By Christine Sampson

It’s got a new name and a new look, but its goals have not changed.

The East Hampton Education Foundation has officially dropped “Greater” from its name, hoping that the community will more easily recognize it and connect to its mission, which is to “enrich the lives of students in East Hampton public schools by supporting superior educational and wellness programs.”

Those thousands have now added up to more than $1 million given away, impacting at least 60,000 children, in the 16 years since the organization was established. “This is a big achievement for us,” Nancy McMullan, who has been its president for five years, said this week. “We wanted to take note of that and celebrate it and share it with the community. People are sort of slightly unaware of who we are and what we do.”

The East Hampton Education Foundation supports teachers and kids in districts from Sagaponack to Montauk. It is also linked to the Tyler Project, which focuses on young people’s mental health. The new website is eh-ef.org. Its next in-person event is slated for June 16 at the Clubhouse in East Hampton.

Fortunately for the group, Ms. McMullan said, the pandemic didn’t crush its usual activities and programs. “We were really creative,” she said, pointing out the art boxes and book deliveries that its volunteers were able to make and do. BookHampton and the teachers “really pulled off the book fairs for us,” she said.

The organization also stands ready to help pay for the trip to the 9/11 Memorial and Museum in Manhattan that East Hampton’s high school juniors usually take each year. “If it’s on for that this year, we’re prepared to support that. We’d like to give it to all the kids that missed out” because of the pandemic, Ms. McMullan said.

It all amounts to some momentum and a “really positive direction,” she said. “We’ve gotten some new members. It’s going to be great. We do really good things for the students. . . . We’re getting more and more people who feel passionately about that and the impact we’ve had.”