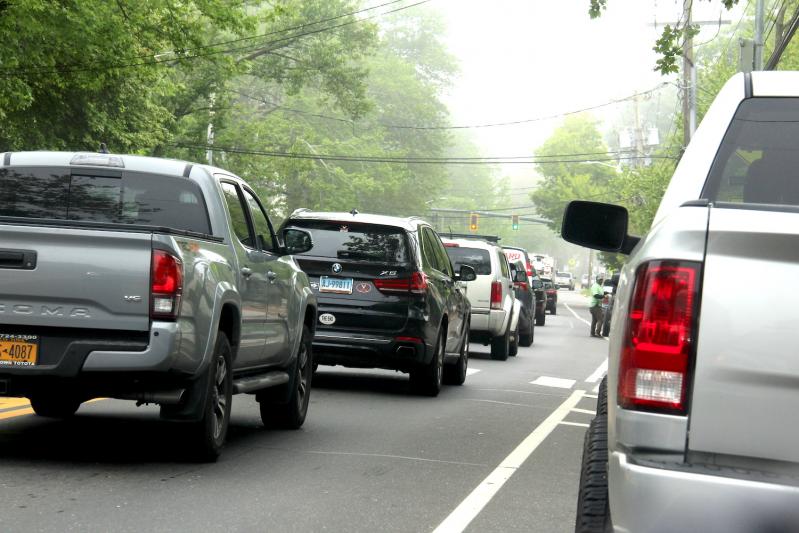 The "trade parade" of heavy traffic heading east in the mornings and west in the afternoons is one indication of how many people who work on the South Fork are now commuting from points west.
Durell Godfrey
By Christine Sampson

It's happening now in local public schools: Dismayed by their long eastbound commutes and other issues, teachers and other key employees have been resigning from their jobs, leaving schools strapped for the help they need to cover classes and keep things running smoothly.

In the East Hampton School District, for instance, about a dozen teachers have taken on extra classes in the areas of math, science, foreign languages, and career and business studies. The extra classes come with stipends, which, depending on a teacher's level of seniority, could cost the district between $14,000 and $30,000 each.

"It is an expensive Band-Aid," Adam Fine, the district superintendent, said this week. "It's good money, but teachers don't always want to teach six classes. It's extra grading, it's extra prep work. . . . It's not always ideal, but it is a product of not having candidates."

Sometimes, school officials have acknowledged, teachers are called upon to teach subjects outside of their official certifications. Also, having fewer applicants for each subject means a school may not be able to hire experienced teachers. By way of an example, Mr. Fine said at one point the district would get 100 resumes for a single English teaching position, but now, it's typical to get only a handful.

"These are the warning signs" of more serious employee shortages coming in the future, Mr. Fine said. In many cases, he said, it comes down to a lack of affordable places locally for people to live. The East Hampton School Board is hosting a meeting on Tuesday at 6:30 p.m. in the high school auditorium to seek suggestions on how to alleviate that particular problem.

There is precedent in other states for schools to embark on affordable housing solutions. In Newark, N.J., Teachers Village is a mixed-use development that includes affordable apartments for educators along with space for small, locally owned businesses. It opened in 2009, having taken 10 years to come to fruition and another nine years to be fully realized with 203 units of work force housing, thanks to public-private development partnerships.

A decade after Teachers Village opened, in February 2020, "the schools and residences there are fully occupied, with a waiting list for apartments," according to the Brookings Institution. "A true community is forming among the entrepreneurs, some of whom also chose to live in Teachers Village and send their kids to its schools. . . . To make an impact in this ever-changing economy, developers and community development financing institutions must recognize these trends, listen to what local communities, businesses, and consumers want, and allocate funding to support their aspirations."

Bus drivers and substitute teachers are in short supply here, as are computer networking professionals and Spanish-speaking office workers. And East Hampton isn't the only district facing this situation. Others, including Sag Harbor and Bridgehampton, are also experiencing staffing shortages and assigning extra classes to some teachers, and are looking for more bus drivers for sports and other transportation needs.

During a Sept. 21 meeting, Jackie Lowey, an East Hampton School Board member who works in real estate, commented that schools are the "backbone of this community" and that their employees deserve a better quality of life.

Tuesday's affordable housing forum will be a "very strategic, directed conversation that answers the question of what creative things can the East Hampton School District do . . . to build, borrow, beg, and steal housing for staff?" Ms. Lowey added. "We've lost administrators; we lose teachers on a regular basis."

According to Kerri Stevens, East Hampton's district clerk, many local government officials and key players in the East End housing industry have committed to attend Tuesday's meeting, including Katy Casey, executive director of the East Hampton Housing Authority, and representatives of the group East End YIMBY, which has been advocating for work force housing in communities across the South Fork.