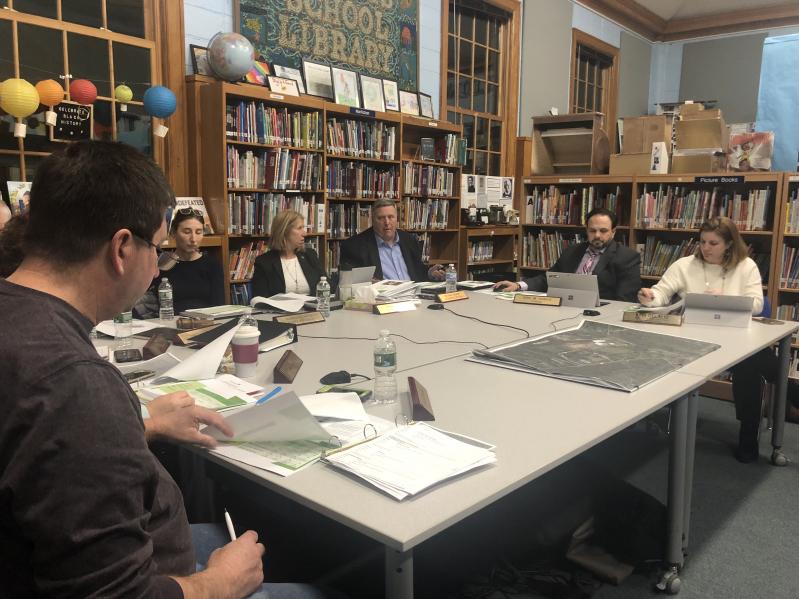 Michael Henery, the Springs School business administrator, told the board Monday that this budget season is going to be very challenging.
Christine Sampson
By Christine Sampson

Too many financial factors were up in the air for the Springs School District to be able to present a draft during a 2020-21 budget workshop on Monday, school officials said.

“This has been a challenging year for us with budget-building. There are a lot of things going on, and a lot of unanswered questions,” Michael Henery, the district’s business official, said.

The state-level debate over school funding is one thing, and whether there will be any “bullet aid” available in one-time sums from state legislators is another open question. There are “constant needs,” Mr. Henery said.

“The bottom line is the state has a bucket of money,” he said. “It doesn’t really change much, and what it means for us to get more on Long Island is someone upstate is going to get less. The fight right now is getting legislators up in Albany to realize that socioeconomic patterns on Long Island are so much different today than they were 20 years ago.”

Breaths are being held for a final tuition contract with the East Hampton School District, which receives Springs students who finish the eighth grade. The current contract, which was for five years, expires in June. Early tuition discussions last November were thought to be heading in the direction of cost increases for Springs.

When a community member pressed for more information on the contract, Debra Winter, the district superintendent, said, “We promised not to talk about it in public until we are done with negotiations. . . . It’s been very tough.”

But Mr. Henery pledged, to a crowd that included about a dozen residents, parents, and current and former teachers, that the district would do all it could to stay within the limits of the state’s cap on tax levy increases. This year the state’s allowable levy growth factor is 1.81 percent, but other variables, such as debt payments and real estate growth within district borders, could allow Springs to raise its tax levy by an additional percentage point.

He also said Springs is “trying to not cut any teachers or staff.”

“We’ve already started looking at supplies and contractual areas, with 25-percent cuts already,” Mr. Henery said. “How much overtime are we paying? How many extra positions are we holding on to? We don’t have much there.”

Springs now has a $29.69 million operating budget, of which just over $1.6 million comes from the state. It has had to foot the bill for several big, unexpected costs over the last few years, including $350,000 to repair a collapsed floor in a special education classroom. Whereas New York State recommends that districts maintain 4 percent of their budgets available as “unassigned fund balance” in the case of emergencies, Springs had 3.34 percent heading into the 2019-20 school year.

Barbara Dayton, the school board president, said the district is “in a really good spot, with things to offer everybody,” such as theater, robotics, arts, science and technology activities, functional academics, and sports. There may even be a full-fledged girls field hockey team again next year, if a discussion earlier in the meeting was any indication.

“It would be a shame to have to cut any of that,” Ms. Dayton said.