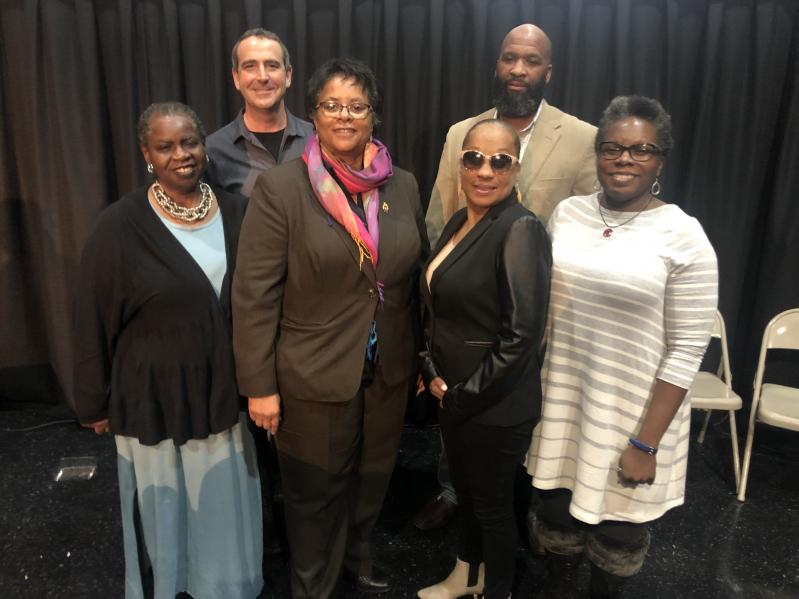 “Let’s get together as one, support each other, and create action plans so we can move forward and have an impact on our community,” Bonnie Michelle Cannon, the executive director of the Bridgehampton Child Care and Recreational Center, told a crowd of more than 200 people before a screening of “Just Mercy” on Saturday at the Regal Cinema in East Hampton.

The film that immediately followed her remarks served as a profound explanation for Ms. Cannon’s call to action.

Based on a memoir of the same title, the film by Destin Daniel Cretton chronicles the efforts of a young, Harvard-educated attorney’s historic fight to free an innocent black man from death row in Alabama in the 1990s. Bryan Stevenson moved to Alabama from his hometown in Delaware in 1989 to establish the Equal Justice Initiative, helping people in situations where the odds are stacked against them.

Mr. Stevenson’s fight continues today and has uncovered what he has described as “a shocking rate of error” in cases where the criminal justice system has landed inmates of color in prison or even on death row. The Equal Justice Initiative has freed more than 140 wrongly convicted inmates on death row with dismissals and reversals since Mr. Stevenson and a supporter, Eva Ansley, established the organization.

The screening was a partnership between the Hayground School and the center, and was sponsored by the theater, the national nonprofit organization Represent Justice, and One Community, which describes itself as “an independent social impact and film production company.”

“We all need justice, we all need mercy, and perhaps some measure of unmerited grace,” Mr. Stevenson has said.

Many in the audience on Saturday found themselves crying, whether from the film’s dramatic story or from its cathartic ending.

Following the screening, and before a panel discussion, the Rev. Kimberly Quinn-Johnson of the Unitarian Universalist Congregation of the South Fork led the audience in a deep-breathing exercise — a much-needed moment of rest and reflection after what had been a very intense experience. The ensuing discussion focused on justice, preventing crime, and advocacy for those who are reentering society.

The panel included Risco Mention-Lewis, the deputy commissioner of the Suffolk County Police Department and founder of the Council of Thought and Action initiative, Meesha Johnson, a substance abuse counselor and member of the Suffolk County Native American Advisory Board, who is pursuing a master’s degree in social work, and Kyle Braunskill, who established two organizations, Safe Harbor and A New Day M.C.S., which work with at-risk populations and formerly incarcerated people who are transitioning back to everyday life.

“I’m sure that every single person in here knows somebody who has been challenged by the legal justice system and how unfair it is to people of color,” said Meesha Johnson, who said she cried through both the film and the book. “They don’t do a good job of rehabilitation . . . we have to advocate on behalf of these people.”

She also called for better mental health care for society’s most vulnerable.     Mr. Braunskill, who attended Southampton High School, told the crowd that he spent some time in jail during his 20s. “There are a tremendous amount of obstacles . . . but there’s promise,” he said. “You’re taking a lot away from a person, no matter what their circumstances are, and they’re going back into society with a stigma, with, oftentimes, parole supervision. Where are you going to go? Who’s going to hire you? Who believes in you? What support are you actually going to have? . . . There are more programs and movements that are being developed to assist, but oftentimes many people are going back to the same circumstances that got them incarcerated in the first place.”

Ms. Mention-Lewis said lives can be transformed “just by having relationships.” She said the hardest part about aiding in re-entry is that “we don’t think the best way to have re-entry is to have people never leave.”

“Policing has turned into arresting,” she said. “Policing is about making communities safe. We think of re-entry as outside agencies doing that. We think of intervention as outside agencies doing that. We think of police and [the district attorney] as arresting . . . but there are concrete ways of stopping crime. When you focus on getting an arrest, and you get promoted based on your number of arrests, what that does is sort of bastardizes the system. What that doesn’t allow for is true change, which has to occur.”

With the film timed in conjunction with remembrances of the Rev. Dr. Martin Luther King Jr., whose 91st birthday would have been Jan. 15, Ms. Quinn-Johnson recalled one of his well-known statements: “The ultimate measure of a man is not where he stands in moments of comfort and convenience, but where he stands at times of challenge and controversy.”

“I really believe that we are such a resilient people,” said Ms. Johnson, a member of the Shinnecock Nation. “I’m not denying anything we’ve been through as people of color, as black people, as Native American people. We have been through a lot . . . but we’re still here. I think we should focus on that. When we talk about mercy and goodness we’d like to see, especially in our government and in our politicians, that’s the same type of mercy we have to collectively exude as a community.”     Referencing a quote from the film, Ms. Mention-Lewis said that “crime is often perpetuated by hopelessness,” not anger. She said she sees it on a regular basis. Statistics show that one in nine black children have a parent who is in prison, she said.