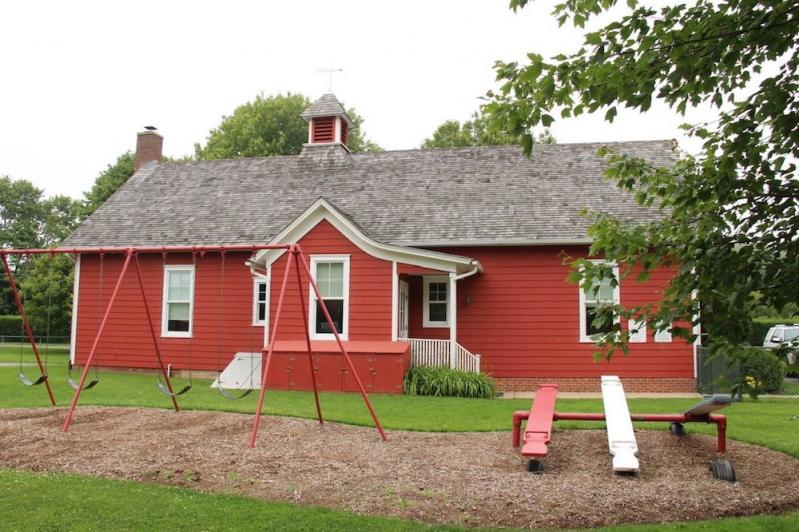 Sagaponack parents have said they like Bridgehampton's small-school atmosphere, and its proximity to their little red schoolhouse.
Durell Godfrey
By Christine Sampson

A group of parents of Sagaponack School students spent the last several years lobbying the school board to add Bridgehampton as a choice for children in fourth grade and up. Their campaign has yielded the outcome they had hoped for.

On Jan. 15, the board voted 2 to 1, with Brian Villante voting no, to pursue an educational contract with Bridgehampton.

The affirmative vote came after many months of discussions between the two schools, along with tours and meetings, a petition by the parents, and, finally, a lengthy discussion at last week’s board meeting. Four parents who attended smiled and thanked the board.

Ms. Dye, a six-year resident of Sagaponack, said Bridgehampton already feels like a part of the Sagaponack community. “We participate in the library and community center events. My kids have grown up with a lot of Bridgehampton kids. I also quite enjoy the energy of the Bridgehampton School. They have so much to offer, and such positive support from the community.”

At present Sagaponack has contracts with the East Hampton and Sag Harbor School Districts. Any agreement with Bridgehampton will come before Sagaponack voters as a ballot proposition on May 19, the same day they will vote on the school budget and elect a board member.

Sagaponack’s contracts with East Hampton will expire in June, so there will likely be several educational agreements on the ballot. Negotiations between East Hampton and its feeder districts are under way. In November, East Hampton administrators indicated that they may eliminate the 5-percent tuition discount for school districts that exclusively send their children to East Hampton, but nothing is set in stone.

Sagaponack parents have said they like the close proximity of their district and Bridgehampton. They also like Bridgehampton’s small-school atmosphere.

Diana Payne, who has lived in Sagaponack since 2010, has been petitioning for the Bridgehampton option for five years. Her two youngest children attended the Bridgehampton School’s prekindergarten program, and one is now at Sag Harbor Elementary.

“I am ecstatic,” Ms. Payne said this week. “I am so grateful that they are actually going through with it, and that they’re willing to listen to the families who have been pursuing it for such a long time. It’s a good change. They’re our neighbors. Our kids grow up going to the Hampton Library and they know this town. It makes more sense that we are part of that school. It’s less than a mile away.”

Sagaponack’s superintendent, Alan Van Cott, explained that state law says the primary school contract could be a maximum of one year, while a secondary school contract would be between two and five years. An agreement for busing would also have to be worked out. Bridgehampton uses the McCoy Bus Company, and Sagaponack has a contract with the Sag Harbor School District to transport the children. It is typically the feeder district that pays for the buses.

Another matter, the per-student tuition rates that Bridgehampton would charge Sagaponack, appears to be almost settled. Bridgehampton would charge a rate of $17,500 per student, though additional costs for special education services would be worked out on a case-by-case basis. Among the considerations in the tuition agreement, Mr. Van Cott said, is preserving Sagaponack’s kindergarten-through-third-grade enrollment so that the “little red schoolhouse,” as it is often called, maintains a robust educational program. It now has about 15 students.     For students in grades not offered by Sagaponack or other feeder schools, East Hampton and Sag Harbor charge secondary school tuition rates far higher than Bridgehampton does — more than $20,000 per child, plus special education expenses in some cases.

Mr. Villante said his concern was “where it will stop.” He said two options were enough, and questioned whether Sagaponack would then consider Southampton schools, or others, in the future.

“We can draw a line in that it’s bordering districts,” Cathy Hatgistavrou, the school board president, suggested.

“To Brian’s point,” Lauren Thayer, the board’s vice president, said, “I don’t think we want to do this every two years.”     “We’re all looking for different things for our kids,” Ms. Thayer continued. “Now, more than ever [Bridgehampton] seems like a natural fit. The school has a lot going on, and, for me, it’s a good idea. It sounds like people want it.”

Ms. Hatgistavrou said the fact that there was a fairly large group of Sagaponack parents requesting Bridgehampton was the turning point this time around. “We can’t have one person and we’re busing them around,” she said. “With a group of people — that’s what’s bringing us to Bridgehampton. It’s a bigger discussion at this time.”

Robert Hauser, Bridgehampton’s superintendent, said the school would happily welcome Sagaponack’s kids once a formal contract is signed. He said the local schools all work together in some way across the region, whether for sports, special education, or busing, and this is an extension of that.

The Bridgehampton School Board must also approve a new instructional contract with Sagaponack. The board was to have met last night.

“I think this is a great opportunity for both districts. We’ve been working together the whole way,” Mr. Hauser said. “Geographically, it makes sense. With the new addition that we have going on here, and the capacity that we have, we have the ability here to take on more students from other districts without incurring a significant cost.”
--
Correction: An earlier version of this story incorrectly reported that the Sagaponack School District would offer Bridgehampton as an option for prekindergarten. Bridgehampton would be an option only for students in fourth grade and above.