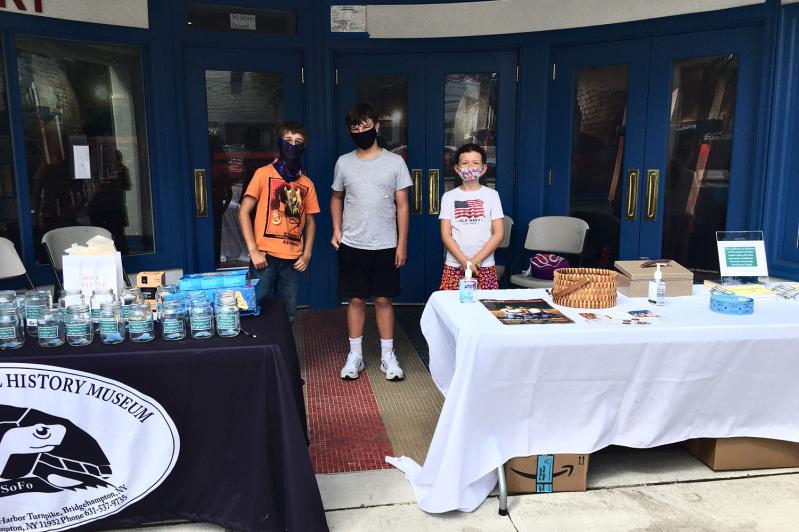 Children in the Young Environmentalists Society, a club hosted by the South Fork Natural History Museum, held a fund-raiser last month in Sag Harbor in which they sold recipe books they created themselves.
Mare Dianora
By Gabrielle Topping

The first meeting of the South Fork Natural History Museum's Young Environmentalists Society, or YES, was held in February 2020, and the plan was to plant seeds for a garden that 10 to 16-year-old club members could tend together through the growing season.

As with so many things, the pandemic forced a change of plans for YES, which is led by Mare Dianora, an interdisciplinary artist whose practice involves building community and exploring connections to home and place. The group was originally formed in January after SoFo's annual climate change discussion last fall. Several students who had attended, including Ms. Dianora's son Finny, 11, were asked to be founding members of YES. The museum later asked Ms. Dianora to facilitate the program, whose mission is to engage young minds by developing a fuller awareness and understanding of the current state of the environment.

The club's March meeting was supposed to be a field trip to a farm, but Ms. Dianora and the museum's executive director, Frank Quevedo, decided to go on their own and film it so that children could visit the farm remotely. As for the garden, Ms. Dianora, her husband, Claes Brondal, and their sons, Finny and Ollie, 7, took over the building of the garden, and museum staff tended to the seedlings.

"Once we had to go remote, it certainly changed our course, but it suddenly opened up the world for us," Ms. Dianora said. YES welcomed special guests from around the country to their remote meetings, including Elisa Ringholm from The Story of Stuff project in the San Francisco Bay area, Lauren Ringer from Ocean First Institute in Colorado, who spoke about a zero-waste lifestyle, and Krae Van Sickle from Drawdown East End. The group has also had an ongoing collaboration with Jillian Worssam, a climate scientist from the National Oceanic and Atmospheric Administration Education in Flagstaff, Ariz. Dr. Worssam facilitated two contests for YES -- designing food webs and designing a device to draw carbon from the air -- and three book discussions.

The program's first in-person meeting since February was in July, when Scott Bluedorn, a South Fork environmental artist and activist spoke about his artwork. Next time, the group will gather for a beach cleanup.

"I really want the kids to feel like this is their program and love their ideas for how they want us to spend our time together," Ms. Dianora said. "I hope we all push each other to do better with our environmental impact on this world. I want us all to question how we can use less and create less garbage. I sent a photo of my weekly garbage to the kids and told them that 95 percent of my trash is single-use plastic from food packaging. That is unacceptable. I want the members to ask hard questions to the adults around them, as they are the ones inheriting this world."

The program is now taking place biweekly on Zoom on Thursdays at 4 p.m. with a core group of 12 to 14 children. Guest speakers and discussions focus on such topics as hydroponic farming, composting, environmental career goals, water conservation, robotics, food, and merchandise packaging.

Inspired this spring by watching the documentary "2040" about the filmmaker Damon Gameau, who traveled the world in search of new approaches and solutions to climate change, the children decided to raise money for the Campaign for Female Education, which provides education funds for girls in Africa.

The children made their own cookbook to sell, then some of them reached out to local merchants to explain their fund-raiser and solicit donations for a raffle. They sold almost 50 copies of the cookbook during the fund-raiser.

"My favorite thing [about YES] is knowing that I'm helping to make a positive difference in the world," Finny said recently.

"The outpouring of support has been so uplifting to myself and the kids," Ms. Dianora said. The children will meet representatives of the Campaign for Female Education via Zoom to present the money and "hear for themselves exactly how this will pay for these girls across the world and how that will help fight climate change." The children's efforts raised enough money to help 13 girls with their tuition for one year.

"I am so proud of these kids," Ms. Dianora said. "There is so much heart in this group and it really shined through in the fund-raiser. They worked so hard for girls they will likely never meet so they will have a brighter future and hopefully an easier life."