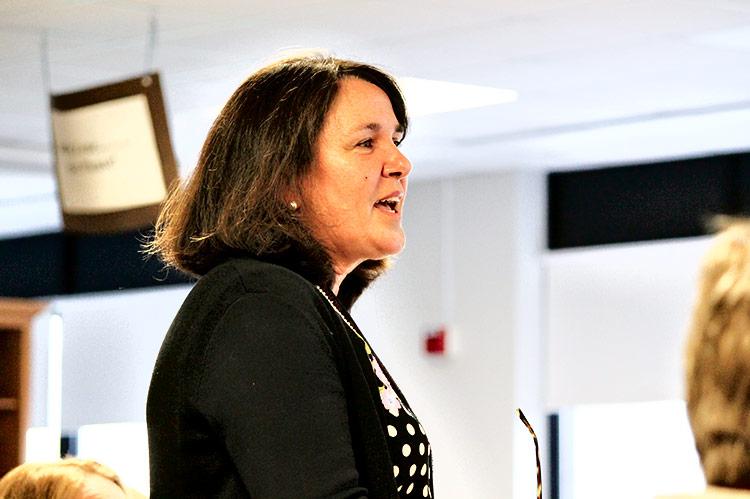 Katy Graves, the Sag Harbor School District superintendent, stepped down over the weekend to have “immediate surgery” in New York City, the district announced Saturday. Jeff Nichols, the Pierson High School principal, was appointed by the school board yesterday as acting superintendent for the next several weeks; Eleanor Tritt, a former Amagansett superintendent, will take over from him next month as interim until a permanent replacement is hired.

Ms. Graves intended to retire on Jan. 6, and in a letter to the board on Friday she said she would be willing to return to her duties before then, if circumstances allow, to help her successor with the leadership transition.

“Do not worry about me. I am in the best of hands and have faith that I will be just fine,” she said in a letter emailed to the community on Sunday. “Plus, I have a big, beautiful family and a really cute husband taking care of me — who could ask for anything more?”

In her letter, Ms. Graves lamented not having “the chance to have all of those ‘lasts’ that everyone that works with children treasures.”

“Most of all, I have not had the ‘moments’ to tell each and every one of you just how special you are and what a difference you make in children’s lives,” she wrote. “Please know I will find a way, after I am better, to catch each and every one of you and share with you how I believe you have made a difference in a child’s lifetime in the work you accomplish at our Sag Harbor schools or as a parent in our school community.”

During Monday’s school board meeting, Jordana Sobey, the school board president, said Ms. Graves “is missed” and the board wishes her well.

The school board has interviewed several candidates for interim superintendent over the course of a handful of executive sessions over the past few weeks.

Mr. Nichols declined any additional compensation for the acting superintendent duties. Ms. Tritt is to be paid $1,300 per day and will start between Dec. 4 and Dec. 13, she said in a letter to the board. Her appointment runs through the end of the school year.

In other news, Scott Fisher, Sag Harbor’s director of technology, said on Monday that the district is still working diligently to recover from the Nov. 4 cyberattack by hackers. He said no personal information or financial information has been compromised, thanks to the district’s comprehensive, off-site backup systems. A new network has been established, though access to email and Wi-Fi on campus is still limited. Mr. Fisher said almost every computer and laptop is being “wiped clean” to make sure no traces of viruses or malware remain.

“My limited information technology staff has been working very hard with the outside security firm to respond to this situation and recover,” Mr. Fisher said. “They’ve done a great job so I want to give them some praise. . . . It’s been extremely time consuming.”

The school board approved a contract with Core BTS, a technology and security company, to help with the process. The specific financial impact is not known yet, Mr. Fisher said, but he said insurance will cover much of it with the exception of a deductible.

He could not publicly say the cause of or person responsible for the cyberattack.

The school board also heard an update from Paul Wilken, who oversees facilities and groundskeeping, on the outdoor workout station that has been purchased by a local nonprofit called the Dawg Patch Bandits. Community volunteers were working on installing the equipment until a stop-work order was issued earlier this fall. The organization has yet to formally donate the workout equipment to the district, but as soon as it does, Ms. Sobey said, the district’s in-house crew may continue with the installation of the equipment following new specifications provided by the district’s insurance company.