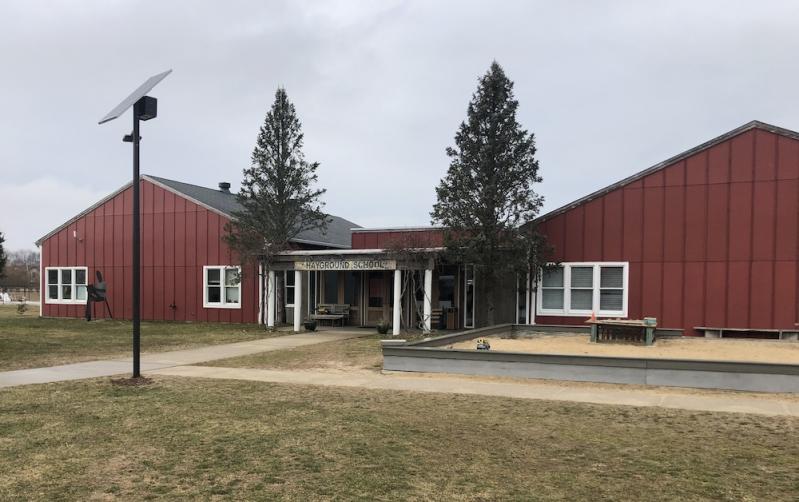 The Hayground School is the site of a popular summer camp attended by hundreds of children.
Christine Sampson
By Jamie Bufalino

After a child and a counselor tested positive for Covid-19, the Hayground Camp in Bridgehampton closed this week out of an abundance of caution, Doug Weitz, the camp's director, confirmed Tuesday.

For the first five weeks of the summer, Hayground remained "unscathed" by Covid infections among the approximately 450 children and counselors who are there each week, Mr. Weitz said. But on Friday morning, he received a call from a parent of a camper who had exhibited Covid symptoms and ultimately tested positive. The child had recently traveled from out of state, had just begun attending camp that week, and was part of the "middle camp" cohort of 7 and 8-year-olds, he said.

Camp was canceled for the day, and for 12 hours, Mr. Weitz consulted with the Suffolk County Health Department, parents, counselors, and board members about how best to proceed. Although administrators had been considering reopening the camp this past Monday for other age groups, and the county deemed it safe to do so, "ultimately we came to the conclusion that there were enough people uncomfortable with the idea," Mr. Weitz said. "It came down to the way people feel, and the thing I'm most proud of is I think every member of our community felt like their voices were heard and feelings valued."

Reports of several other Covid cases and quarantines this week at camps in Wainscott, Montauk, Amagansett, and Southampton could not be confirmed by press time, and those camps' directors did not respond to interview requests.

After hearing about the Hayground camper's infection, a counselor who had been near the child decided to get a Covid test as a precautionary measure. On Friday afternoon, Mr. Weitz found out that the counselor — who has been vaccinated and was asymptomatic — had also tested positive. Despite the proximity between the two, the Suffolk County Health Department considers them isolated cases, Mr. Weitz said, because they had both received their positive results around the same time.

There are 90 kids in the "middle camp" group. All of them, plus their counselors, have been asked to quarantine for 10 days and to get tested five to seven days after the possible exposure. The counselor's infection did not increase the number of people required to quarantine.

Mr. Weitz was eager to highlight the safety protocols the camp has in place. When kids and counselors arrive at camp each day, Hayground requires them to show the results of a health screening on the MyMedBot smartphone app. The self-screening encourages kids to take their health seriously and to be proactive, Mr. Weitz said.

He said nearly all of the camp's activities, except for a few art and cooking classes, take place outdoors, and both kids and counselors are required to wear masks whenever they are indoors. The emphasis on outdoor activities is so focused, he said, that camp is canceled on rainy days.

Given that kids are outdoors for most of the day, and that the virus is far less likely to be transmitted in open-air settings, Mr. Weitz said chances are "minimal" that the camper was infected on site.

The camp has offered $250,000 in refunds for the canceled week while still keeping its staff on the payroll, Mr. Weitz said. While the camp is closed, staffers will be sprucing up the campus, working on personal projects, and creating videos for campers to watch on social media. Meanwhile, administrators will be re-examining safety protocols to see if improvements can be made. The downtime will allow Hayground to reopen on Monday, ready to make the most of the camp's final two weeks. "A little pain now for a lot of joy later," Mr. Weitz said.