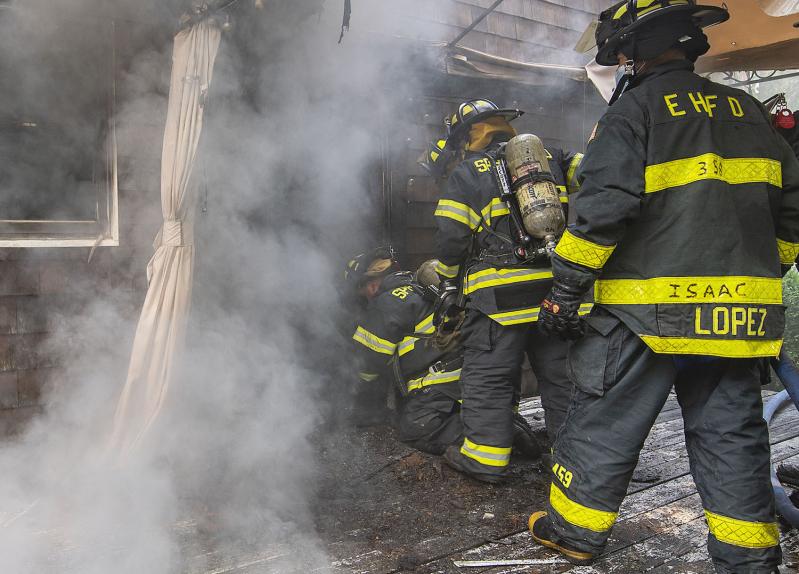 When the call to the Springs Fire Department went out on the morning of the 20th — followed by calls for mutual aid to the Amagansett, Sag Harbor, and East Hampton departments — the volunteers rushed to the scene and put on their heavy protective gear.
Michael Heller

A fire last week that destroyed a family’s Springs house was notable in two respects — its cause and the conditions in which firefighters responded. Regarding the fire’s source, there is a simple cautionary tale to be told; for the volunteers who fought the blaze, there should be respect and thanks for turning out on one of the hottest days of the year.

According to the East Hampton Town Fire Marshal’s Office, the problem began some time ago when a treadmill’s electrical cord became wedged under one of the equipment’s supports. Over time, the cord covering wore away, exposing its wires and causing the laminate floor to catch fire. By the time the fire was stopped, the house had already been left unlivable.

Town Fire Marshal Tom Baker cautioned that regulations about not running electrical cords beneath carpets or anything else where problems could begin were there for a reason. Mr. Baker has also separately pointed out that phone chargers and other plug-in power supplies can also cause fires and should be unplugged when they are not being used. This is a good habit to get into.

July has been hot and muggy, and the day of the fire was an especially oppressive one for many outdoor activities. Yet, when the call to the Springs Fire Department went out on the morning of the 20th — followed by calls for mutual aid to the Amagansett, Sag Harbor, and East Hampton departments — the volunteers rushed to the scene and put on their heavy protective gear. They worked in shifts, one taking another’s place to allow a frontline firefighter to be checked for exhaustion or dehydration by ambulance personnel. (The Montauk department stood by at the Springs Firehouse, as well.)

There is some kind of unwritten rule that bad fires always seem to come amid the worst conditions, be they blizzards or heat waves, but the volunteers get on with it, regardless. This is worth noting and they deserve a tip of the hat for their selfless service and commitment to their communities.