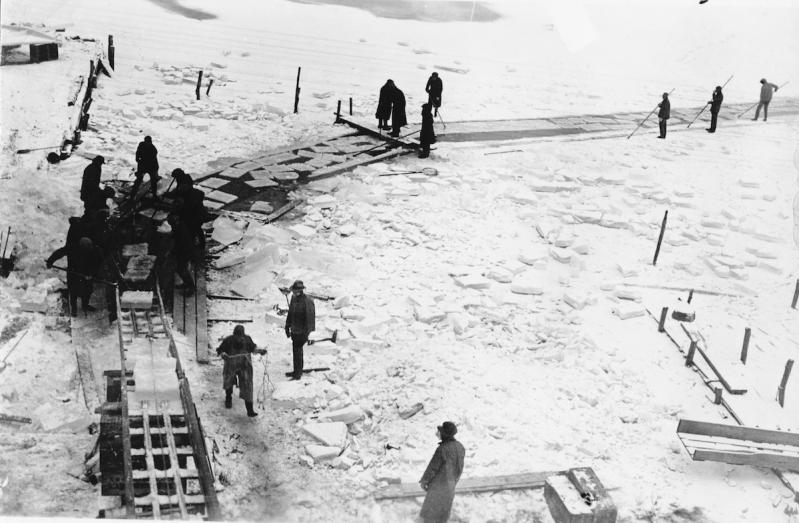 Nowadays, even under the beating August sun, sweet relief from the heat is never too far away. But before there were free electric-buggy rides offering ice-cold mineral waters on your way to Main Beach — before the instant chill of ducking into a brisk Ralph Lauren boutique to escape the blazing rays, before anyone had ever heard the words “climate change”  — there were ice houses.

Once upon a time, back before the modern freezer and refrigerator and on a weekly basis in winter, icemen harvested hundreds of tons of ice, ranging from 5 up to 13 inches thick, from the South Fork’s various bodies of water. These icemen would wield five-foot-long saws in the most treacherous, subzero days.

In the early years of the 20th century, icemen would work every winter, sun-up to sundown. This process consisted of cutting a stream to float the ice “cakes” ashore, sawing the pieces into squares, and snapping the ice at the sawed lines. Each ice cake weighed 300 to 400 pounds. Once the cakes had been floated ashore, a one-cylinder engine would run a chain to elevator the ice cakes up into the shoreside ice house, from where they would be carried to other ice houses, spread out around the East End, where customers could buy them for the ice box.

In the warmer months, according to accounts in old issues of The East Hampton Star, the only insulation protecting the ice was six inches of sawdust or hay harvested from the meadows on Napeague. Calculating for the inevitable melt, to get five tons of ice for use, one would need to “put in” 25 tons of ice. As the ice melted in July and August, it was imperative for the owners of the ice house to continuously fill the empty spaces with more sawdust or straw.

East Hampton’s fishing industry required an enormous amount of ice, and there were no plants nearby artificially producing it. Although imperative for fishermen, ice houses were a staple for the average Joe, as well. Jeannette Edwards Rattray — who was the publisher of The Star in the decades from the mid-1950s to early 1970s — recounted her father harvesting ice every winter to fill their private  ice house, which stood on the lot now occupied by the northernmost wing of the East Hampton Library. Mr. Edwards required a great deal of ice for the ice cream sold at the drugstore next door, in the building that now houses the Star office.

The heyday of the ice house here on the East End spanned from the mid-19th century through the beginning of the 20th century, with the East Hampton harvesting hotspots being Hook Pond, Lily Pond, Tuthill’s Pond, Georgica Pond, and Fort Pond. Of course, from the 1920s onward, ice houses were replaced by ice commercially produced by machine, and ice boxes were replaced by freezers, and the last remaining ice houses were primarily concentrated near the fishing docks in Montauk.

But, looking west, the last standing ice house in living memory could be found as late as the 1970s in Bridgehampton, just east of the Animal Rescue Fund thrift store on Montauk Highway. The Bridgehampton Ice Service may have begun as a harvesting operation, but eventually manufactured its own ice, running a cheeky ad in The Star offering a special deal: “A big kiss and 75 cents will get you a bag of cubed, crushed or block ice at our local ice plant.” They also delivered. The current editor of The Star would go every year to buy a giant block of ice — so big a child could sit on it, like a very cold ottoman  — before an annual Fourth of July beach picnic.

Looking around at today’s warming world, surrounded by a seemingly endless stream of iced coffee, Frosé, and overly air-conditioned stores on Main Street (stores that leave their doors ajar, pouring cold out into the street), it is pleasant to pause and take note of the everyday luxury that is ice.  Those who came before us relied on icemen who endured back-breaking labor to keep the Hamptons cool. The perfectly shaped ice nuggets that shoot out of our Opal 2.0 ice machines are criminally underappreciated.