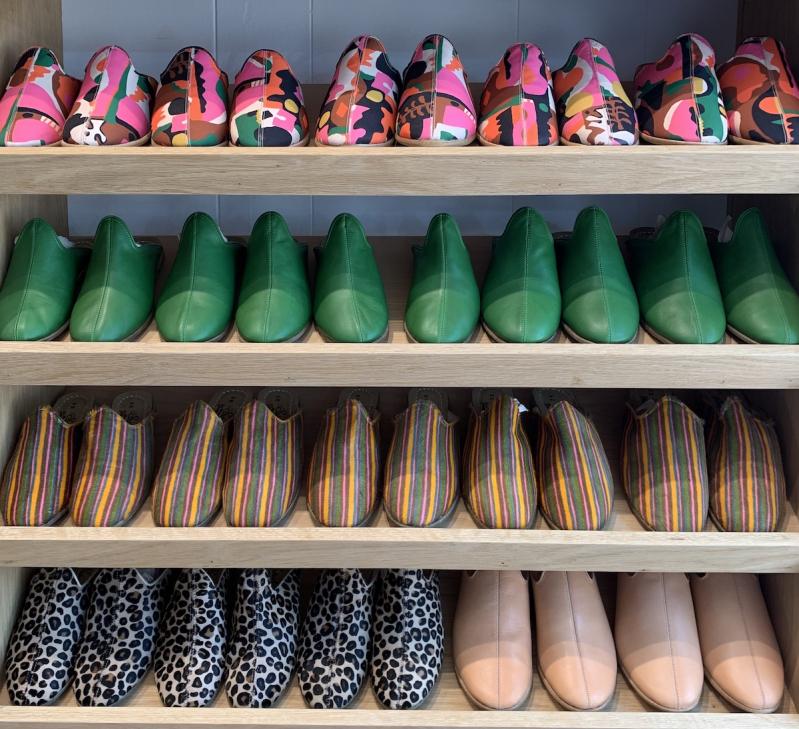 Baby needs a new pair of shoes — now that the weather’s changing and school’s about to begin, here’s a shopping guide, from Montauk to Southampton.

500 West Lake Drive and 771 Montauk Highway, Montauk. This brand, which also has outlets on Block Island and Key West, is all about island vibes and bills itself as “the world’s most comfortable sandal.” We might amend that to “flip-flops.” They’re mostly flip-flops — some leather, some not — and they’re aimed directly at the tourist market. Fans agree and won’t wear anything else.

137 Main Street, Amagansett. Slippers for all — made in Turkey in soft leather or suede, with an indoor-outdoor rubber sole and an amazing array of colors, from bishop-pink to whale-blue and grass-green. The Amagansett “house,” pictured here — like sister boutiques in Dallas, San Francisco, London, and New York City — is a little jewel box bursting with options. They’re pretty great.

33 Newtown Lane, East Hampton. Who needs $500 handmade sneakers? Apparently a lot of people, judging by the sustained popularity of these faux-aged, haute-casual leather kicks. These ain’t your mama’s Converse. Each pair is made by artisans in an atelier in Milan. Golden Goose champions the sustainability cause, however, according to a recent report in The New York Times. They’ve just introduced a repair program, so your favorite adorned kicks will never have to hit the landfill.

86 Park Place, East Hampton. The only truly locally owned company on this list, Gubbins is an athletic-shoe store that’s expanded to become the South Fork’s go-to for all sorts of sporting goods, from baseball pants in Little League season to Wiffle Balls. Need sneakers for marathon-running, slow-jogging, cross-training sessions, or just looking cool in your Adidas? It’s Gubbins all the way.

52 Main Street, East Hampton. They were a revolution when they hit the sidewalks of Park Avenue in the previously chunky-clunky-soled 1990s: Such slim heels! Such pointy toes! You don’t need to be told that Manolos are the ne plus ultra in feminine, handmade footwear. A delicate satin slingback from 1998 still looks chic on the Manolo woman, whether for business or dinner at Momofuku Ko. For the rest of us? Window-shopping is fun, too?

52 Newtown Lane, East Hampton. Thank the lawrd for Shoe-Inn. It’s the last traditional shoe store in these parts, offering a wide range of sophisticated and citified brands and styles for women (no men’s) priced from, well, the upper-low end to the lower-high. Current wares include ever-trendy Birkenstocks, squishy-soft perforated slip-ons from Ilse Jakobson, Superga sneaks, and lots of finds from Italian brands you may not know by name but that deliver the trends right on time.

47 Newtown Lane, East Hampton. You know those driving mocs men and women wear, sockless, while piloting their convertible Mercedes-Benzes up and down Gin Lane? With the pebbly rubber-nub sole? Those classic Gommimo loafers are classic Tod’s. You love ‘em or you don’t. Also here: a selection of Tod’s clothes, bags, and other footwear styles. Owned by fashion mega-conglomerate L.V.M.H.

12 Job’s Lane, Southampton. Sandals with wide, stretchy straps that make them incredibly comfy (and priced approximately in the $125 to $150 range) are what this Southern-flavored brand is all about. They’re practical and cute shoes for the Palm Beach–Southampton round of horse shows and garden parties. Charleston also does comfortable ankle boots that we might recommend with fall’s new long skirt, or rough-hemmed jeans and September’s first sweater.

20 Job’s Lane, Southampton. Designed in Paris and made by hand, Clergerie shoes may not be as familiar to the average American consumer as Manolos or Louboutins, but they are in the same class to the well-heeled (ha, ha) international clientele that (apparently?) is now keeping our Main Streets’ cash registers flush. If you go to work wearing an arty uniform from A.P.C. and attend art openings in architectural Japanese creations by Commes des Garcons, this may be the shoe line for you.

79 Main Street, Southampton. It’s not really a shoe store, honestly — and we’ve failed to mention there’s a sister Flying Point shop on Main Street in Sag Harbor — but we couldn’t do this guide without making mention of the fairly major selection of outdoor shoes in this jam-packed surf-culture space. Kids need a pair of Vans or  those newfangled Crocs (that look almost like normal shoes) or perhaps some sandals? Check here before ordering online. There’s a lot here for men, women, and children.

28 Hill Street, Southampton. See previous page: family owned, and performing an essential service to the community with athletic shoes for all ages. Right now Hoka, On Cloud, Brooks, Nike, and Asics are their most popular brands. Go for performance running sneakers, cleats for soccer and football, tennis shoes — all of it. (This outlet has a second floor accommodating a somewhat larger selection of apparel.)

95 Main Street, Southampton. In the heady Hamptons marketplace, Madden — a New York company gone global —qualifies as affordable, and the styles are always trendy and on point from a youthful fashion point of view. Right now, that means platform and lug soles on slides, sandals, and ankle boots that harken back to the 1990s, the decade of Madden’s founding. If you have a teenager or college student who wants something cool to wear when returning to class this autumn, you might start here.