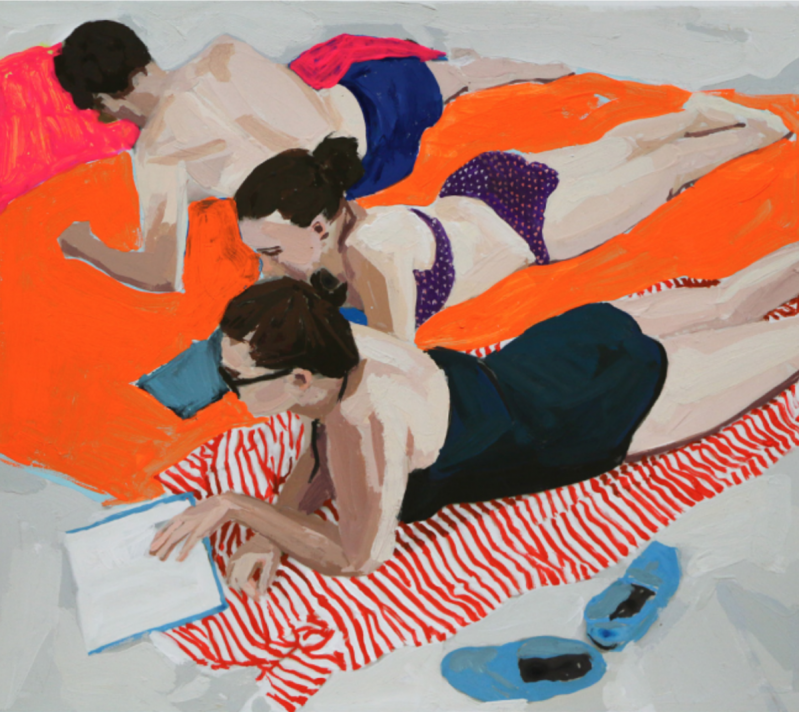 Our cover artist may live in a woodsy part of Ulster County — a poky Upstate hamlet of 207 households called Rifton, to be specific, where the big attraction is a modestly picturesque covered bridge over a trickle called the Dry Brook — but water is the central theme of her paintings in oil and gouache. Samantha French paints young women underwater, exhaling in bubbles, eyes closed; young men suspended as if in meditation in swimming pools, explosions of rhododendron and bougainvillea color breaking above their heads.

Four years ago, another watery work by French appeared on our cover. That one was a swimmer in a striped bikini, spreading her limbs starfishlike as light danced off the bottom of the pool. This month, her subjects are clearly not lounging poolside, but on a beach. It’s a moment that we recognize, here in our beach town: We know they know one-another intimately;  a pair of sisters, perhaps, lifting their eyes from their books as they talk, while the boyfriend’s attention is elsewhere?

Naturally, living in Rifton, French has to get inventive to find watering holes in which to submerge her subjects and herself, with her Canon camera (the resulting photos being the source of her compositions). Sometimes, she meets up with a friend at a hotel someplace, often on the West Coast, to try out different poolscapes. “Having my own pool is still the dream,” she says. “One day, maybe!”