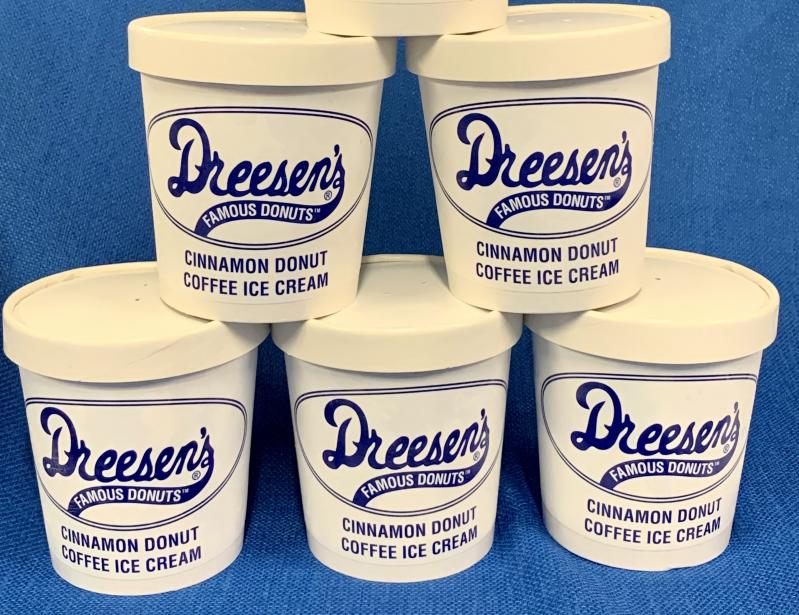 Two beloved East End businesses have come together on a collaboration that is sure to be a very chill hit this summer: a specialty cinnamon-doughnut-spiked coffee ice cream, combining Dreesen’s Famous Donuts with John’s Drive-In’s ice cream. It is the brainchild of a pair of old pals, Rudy DeSanti Jr. of Dreesen’s in East Hampton and David Rutkowski of John’s Drive-In in Montauk.

“My husband, Rudy Jr., had this idea to combine the coffee and doughnuts a while ago,” said Christina DeSanti, the co-owner of Dreesen’s Catering. “He and Dave are friends, and their dads, Rudy Sr. and John, were good friends for years, so Dave offered to make the product for us.”

Many people who grew up in East Hampton fondly remember Dreesen’s Excelsior Market, which used to stand on Newtown Lane, where Golden Goose and the new Á La Mode are today. Dreesen’s Donuts were fried up in a fascinating small machine that stood in the store window, and kids — often having wandered down the street from the Middle School — would stand outside the plate glass to watch them come chugging out on a little conveyor belt. A grocery store and butcher shop, Dreesen’s was founded by Rudy Sr.’s father. Soon after it closed, in 2004, Rudy Jr. and Christina formally launched a branch of this old family enterprise called Dressen’s Catering, following a philosophy that the best food is local, simple and homemade. Dreesen’s Catering is also a provider of meals for East Hampton’s Meals on Wheels and supports other South Fork charity organizations.

John’s Drive-In will be selling the small-batch doughnut-and-coffee ice cream — which DeSanti characterizes as “really just a local novelty item” — at the Montauk burger-and-shake joint for $5.17 for one scoop and $7.18 for two. Dreesen’s will also be adding it to their doughnut dessert table and ice cream bar at catered events this summer, as well as selling pints for $11 out of their catering kitchen.

The perfect-pair ice cream can also be purchased for $11 a pint at Vicki’s Veggies in Amagansett. Vicki Littman, who runs the farm stand, said supporting other mom-and-pops is important to her. She started Vicki’s Veggies when she was only 11 years old. “A few years ago, when I was looking into selling ice cream, there was only one option for me, and it was an easy one: John’s Drive-In is a local family-owned business with the best ice cream in town,” said Littman. “When I wanted to sell the best doughnuts, I called Rudy and Christina at Dreesen’s. They are another local family-owned business that not only have the best famous doughnuts, but they also give back to the community.”

It’s a sweet story, but, honestly, who needs an excuse to love coffee and doughnuts together?