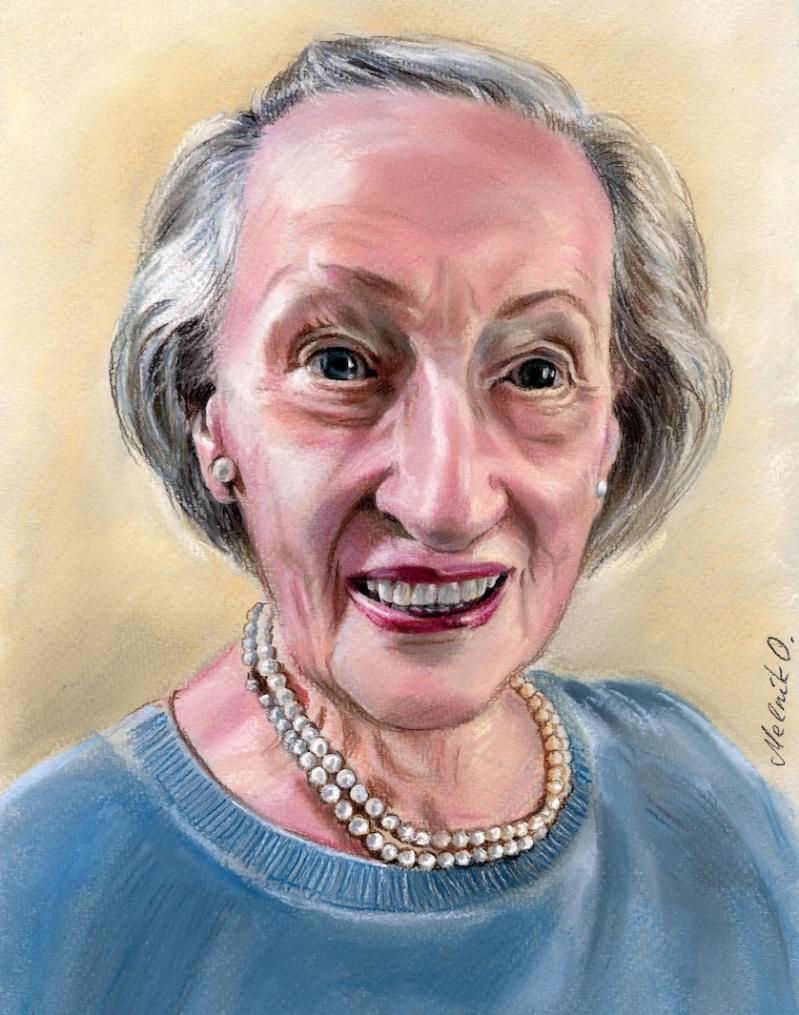 Beulah Pollock, who had a distinguished career on stage and screen as Beulah Garrick, is 101 and lives in Northwest Woods. She claims not to have any advice to dispense to today’s youth — but drops pearls of charming wisdom behind her in conversation. Her watercolor portrait was painted by a Ukrainian artist named Olga Melnik, who continues to work, despite wartime, by commission on etsy.com, as MelnikOlgaArt.
By Christine Sampson

Beulah Pollock is 101 years old and has a lot to say.

Her sitting room is decorated with dried flowers and black-and-white photographs, and in the dining room, there’s a wall of shelves for her collection of decorative plates. She puts on pearls and a flattering shade of mauve lipstick in anticipation of having her picture taken. A former Broadway actress who hails from England, she was flying the British flag outside the door of her cottage in Northwest Woods — lowered, of course, to mourn Queen Elizabeth. She points it out to a visitor: “You can say that when you arrived at the house, the Union Jack was respectfully at half-mast.” Emphasis on respectfully.

Pollock tells marvelous stories of a childhood in the English countryside, her acting days, the good times she had with her late husband. But when asked what kind of advice she has to offer younger generations, she gets a bit shy and denies having any. In describing a life lived to the fullest, though, some tidbits of unintentional wisdom revealed themselves.

For instance, it’s important to have hobbies, but one of them should be gardening. “What is a house without a garden?” she says, lamenting the recent, unwelcome arrival of rabbits that have made a feast out of her ferns and hostas. “To anyone reading this article, could you help me put up chicken wire? I expect to pay for the help.”

Pollock was born Beulah Garrick in 1921 in Nottingham, in the north of England, and was raised by parents who liked to write and perform comedic skits and songs. She and her two older brothers often starred in these performances. In her first, a Christmas concert, “my mother told me that I stole the show. I was 4 then.”

This brings up another note of advice: Believe in the magic of Christmas.

“There were never a lot of toys but a lot of board games, bugles, drums, and a stocking hung at the top of the bed,” she recalls, “which I can still remember squeezing in the middle of the night and the thrill of hearing rattling paper inside. . . . It was all about the element of surprises that made for such exciting Christmases. My parents had a way of doing this.”

Pollock attended a Catholic boarding school for several years, disliking the nuns’ harsh rules and severe enforcement of them. “I became rebellious,” she says. “The worst part was I couldn’t learn. Instead of being helped, I was punished.”

Maybe it was the strict boarding school that toughened her up for the difficulties she would face making a living as an actress? Or maybe it was her family’s farming roots. Either way, there were times when she didn’t have much to eat outside of the vegetables they grew, particularly when World War II broke out and rationing became policy. Some of us might benefit from looking at hardship the way that Pollock does: “I would say that being without toughens you up,” she says. In other words, what doesn’t kill you makes you stronger, and that sounds kind of like advice, too.

There’s another lesson to be taken from the vegetables: Avoid using pesticides. “We didn’t spray for anything then,” Pollock says. “Do you understand?”

She acted in nearly 200  commercials  and nine Broadway productions, retiring at the age of 83. She’d simply had enough. “No job is worth burying yourself,” she says.

Pollock made her East Hampton debut in 1955 when a West End comedy hit called Quiet Wedding played at Guild Hall’s John Drew Theater. Her big break came when she met Noel Coward, the famous playwright, actor, and director. They appeared together in the Ford Star Jubilee on television, and that’s when her phone started to ring.

“He said, ‘You walked out of the pages of my play,’ and that was it,” Pollock said. “He took a great liking to me, so I was very fortunate.”

It’s hard to tell someone how to be in the right place at the right time. Instead, the wisdom here is that one should be ready for opportunity when it comes along — and be persistent, like when Pollock was told at an audition that she was too young. “I went dressed for the part,” she says. “That’s very important. I got the job and five days later was my opening night. Reviews were great and I was asked to join the company.”

It’s also important to be open to love. Her second husband was Bernie Pollock, who himself had a long career as an actor and stage manager. The couple met on the set of Brendan Behan’s 1960 play The Hostage and married a year later. He died in 2016 at the age of 96. There hasn’t been a roaring fire in the fireplace at home since then, Beulah Pollock says.

These days, she relies on friends who help her with shopping, chores, and doctor appointments. She likes watching old movies and listening to NPR.

Pollock implores you to drive at safe speeds, particularly on Main Street.

You don’t actually need a swimming pool to have a happy life.

Look at your cellphone as little as possible.

Write things down so you can remember them later.

Use your diaphragm to project your voice as if you were in a theater without any microphones, just like Pollock did when she first started out.

“Sometimes when I get up late,” she says, “the first thing I say is, ‘Damn, I overslept again.’ Then, when I’m getting washed up, I think, ‘I’m here another day.’ Another day has been given to me, and I’m happy about that.”

But still — during a visit that lasts nearly two hours — she insists that she doesn’t know any secrets to living a fulfilling life. “Advice that I would give might not fit another person,” she says. “You just arrive at old age and deal with it the best you can. That’s how I would end the article, actually.”