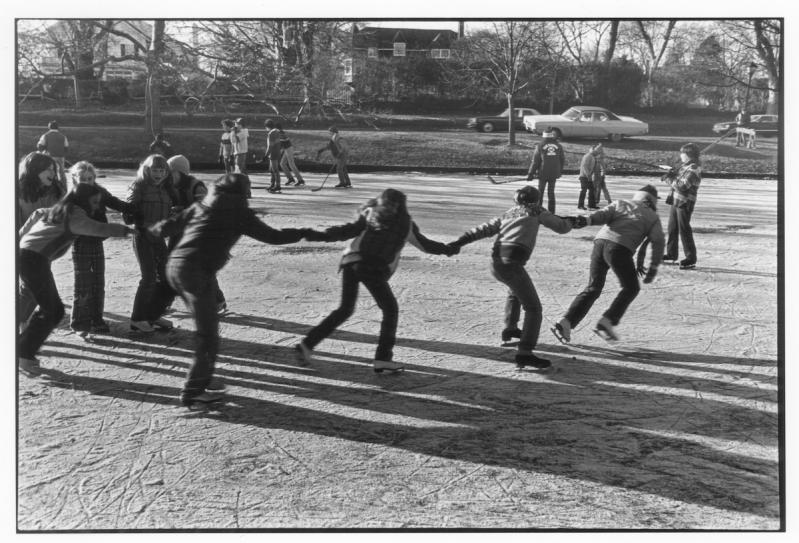 Here’s an old photograph that will call out — like the sound of echoing ice, crack! — to those who spent the winter afternoons of their adolescence cruising Town Pond on skates as the sun went down. It’s a Saturday or Sunday, we’d wager, and — judging by the Fair Isle sweaters, the fuzzy earmuffs, the cut of the jeans — probably around 1980.

The camera faces west across Main Street, toward the Moran House and the “White House” on the corner. Mom has parked her boat of a 1970s family car illegally on the grass by the side of Main, and the girls have joined hands to execute a maneuver called the whip. Gang way, boys! The girls are gathering speed, grasping wet mittens tightly, and flinging one-another across the ice in whiplashing waves, going so fast that the person on the end of the chain travels at a velocity unknown to Dorothy Hamill.

These days, the whip is not considered acceptable behavior from a safety standpoint; someone might get hurt. No one here has a helmet; no one in 1980 wore a helmet for anything other than football. But there is a security reflected in this photograph that's been lost, in other ways. The pond, for one thing, was only knee-deep then, pre-dredging, and the worst that could happen if the ice broke was that you'd get the ankles of your bootcut Wranglers wet. Then, too, there was the security of living in what was still a small town, where everybody knew your name. That afforded a middle-schooler more autonomy, the freedom to spread her wings. Crack that whip, and you’d be flying. — East