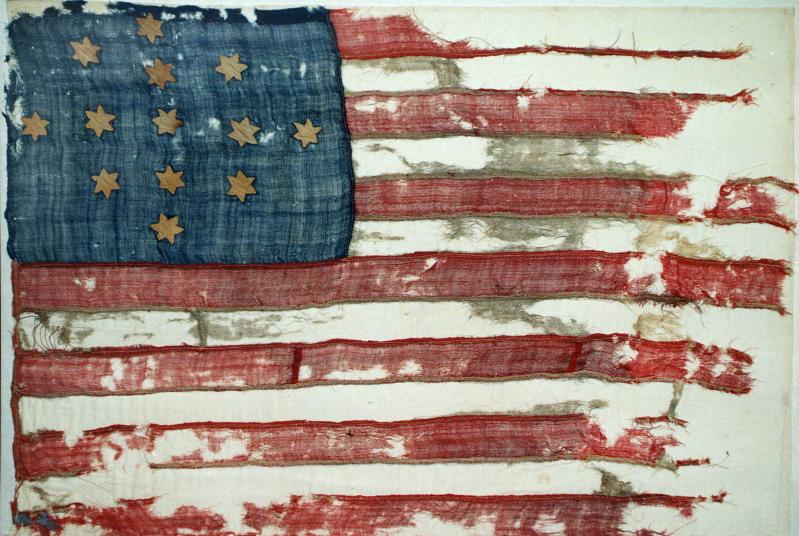 The Hulbert flag, of worsted wool and homespun, was discovered in a Bridgehampton barn in 1926. Some believe it merits re-examination as a possible 18th-century creation — and potential inspiration for Betsy Ross.
From the collection of the Suffolk County Historical Society Museum
By Colette Gilbert

There’s a room on the lower level of the Suffolk County Historical Society building that holds an artifact that was once revered in local history. On display here is an object made out of cloth, stitched by hand, and preserved, tightly pressed under glass. It measures 41.5 inches by 28.5 inches and consists of 13 white six-pointed stars on a blue canton, with seven bars of red and six white. It’s constructed out of homespun, a worsted wool, with the stars made out of cotton muslin. It is known as the Hulbert flag because it was found stashed in the rafters of a Bridgehampton barn that was owned long ago by a man named John Hulbert.

A magistrate and notary public, John Hulbert oversaw business at the Custom House in Sag Harbor. He was a man of many trades: cordwainer, saddler, and storekeeper. It was the year 1775 when John, at 36, was called to duty and given the rank of captain to raise a company of men by order of the provincial New York Congress. Captain Hulbert’s Bridgehampton Company of the 3rd New York Regiment was one of 10 such companies in the colonial province of New York. Sixty-eight men and boys from Bridgehampton, East Hampton, and Southampton signed up for a six-month enlistment. Training took place in the center of Bridgehampton, on the Triangle Commons, where the first windmill had stood.

The mustering ground for the new Continental soldiers was transformed with a flurry of martial activities. A nonprofit today called the Brigade of the American Revolution describes the Manual of Arms that dictated the men’s training. Commands were echoed by the rhythm of fife and drum. Yankee Doodle and The Duke of York’s March broke the stillness of the sleepy seaside village, filling the air with something new, the drumbeat of longed-for liberty and independence.

The captain’s house and barn were a mere stone’s throw from the marching grounds. If one were to stand in front of the present-day Starbucks, looking  across Main Street and just behind a row of trendy shops, he or she would see the truncated remains of the once central and celebrated triangle, memorialized by a plaque that gives a brief history but speaks nothing of the spirit of those husbands and sons who left behind family, farms, and crops, marching forward with uncomfortable thoughts of war. Presently, with a comforting cup of Siren’s brew in hand, a visitor turning east would see the Bull-Head Tavern — a notorious gathering place for ne’er-do-wells and well-to-dos alike that is now known as the Topping Rose House hotel and restaurant. Crossing the Bridgehampton Turnpike to this spot a hundred years earlier than that, he would have come upon the barn and the house belonging to our good Captain Hulbert.

It takes some imagination to visualize the past, before the paved roads, storefronts, commercial buildings, and the hotel-cottage suites that now stand on Hulbert’s homesite. It is interesting to note that — according to reporting in The East Hampton Star — the 18th-century barn, Hulbert’s barn, survived until 2012, when it was dismantled to make room for those hotel cottages. (Initially,  its wood remnants were stored behind the Nathaniel Rogers Mansion, across the street, but — according to Henry Moeller, a former Southampton Town historian — they have gone missing and are now presumed lost.)

In 1926, a banker and historian named William T. Halsey acquired the Hulbert house and barn from his recently deceased friend Dr. John Lyon Gardiner. It was heavy with history even in the twenties, and Mr. Halsey went exploring.

While poking around the rafters of the barn he found something. Near the chimney was a parcel covered with dust and yellowed with age. Careful unwrapping revealed a collection of 18th-century military orders and enlistment papers. They were Captain John Hulbert’s dispatch, and within was found tattered scraps of fabric — woven fragments of red, white, and blue. As fragile and transparent as dew on a spider’s web was this whisper of a flag.

There was a hum of excitement around this discovery and men of means took note. Morton Pennypacker, historian and collector of Revolutionary War ephemera, was the ambassador of the flag, bringing it to national attention with a story in The New York Times.

Pennypacker, whose papers are now part of the East Hampton Library’s Long Island Collection, tells the tale of this flag being the standard carried by Capt. John Hulbert’s men from the 3rd New York regiment to Fort Ticonderoga, to escort British officers who were taken prisoner from there to Philadelphia to be displayed before Congress. The flag was held aloft at the front of the parade, Pennypacker said, greeted with cheering throngs on the streets of Philadelphia. Pennypacker suggested that a sketch was hastily made and handed off to Betsy Ross herself. Her interpretation, “Old Glory,” being a variation upon the original theme of the Bridgehampton flag. Was the Hulbert flag the original? This would change the narrative of Betsy Ross, making Bridgehampton, not Philadelphia, the birthplace of our nation’s flag.

With the New York Times story as its herald, the Hulbert flag became famous overnight. A wave of unabashed jingoism swept over Long Island. People traveled from far and wide to get a glimpse. The people oohed and aahed, talking of treasures found in attics and relics in barns. So in demand was this flag that it was placed on display at the New York State Fair. For almost half a century, the flag was held in reverence in the hearts of the East End population.

Then, in 1972, Grace Cooper, from the division of textiles at the Smithsonian Institution, would examine the relic flag, stating in her report that the cotton threads she saw would date it no earlier than 1840: That type of cotton thread was manufactured for sewing-machine use, she said.

No historian at the time is known to have challenged her assessment. It is not known if Cooper was made aware of documentation showing that the flag had undergone stabilization when being prepared for display in the 1920s, and that contemporary thread was used in that process.

It was said that Halsey’s own sister-in-law contributed to the stabilization efforts, hand-stitching its reinforcement with cotton thread, but Cooper’s report essentially declared the flag to be a fraud, thereby invalidating its folk-hero status and relegating the relic to the category of disproven and undocumented. Cooper died in 2004.

It should be noted that at the time of her assessment, Cooper was touring the country examining and discrediting many 13-star flags as 19th-century imposters. This was the basis of a book that she would publish in 1973. Today it could be considered a possible situation of confirmation bias, her findings predetermined — or maybe not. There are those who think the flag should be re-examined by an expert who doesn’t have a thesis to prove.

After her report, the flag was taken down and stored on a shelf in the library of the Suffolk County Historical Society. Eventually, it was put on display in a small room that housed other military artifacts from the East End. The exhibit’s curious placards about the flag mention one Fonda Thompson who had examined the flag using a surgical microscope, and upon finding raspberry seeds in the red wool, quipped that someone must’ve been eating raspberries while making the flag. This remark about the raspberry seeds may well stem from a lack of understanding of local dyeing methods used in the 18th century: It’s been documented that raspberry, as well as sumac berries and madder root, were all accessible and used in textile dying on the East End in the 17th and 18th centuries. An example of such red wool homespun exists in the form of the Mulford frock coat, housed in the collection of the East Hampton Historical Society.

Dr. Moeller, an historian and author of the book Inventing the American Flag, has been studying the Hulbert flag for nearly half his lifetime. He has examined it and written numerous books and articles on the subject. He cites an obscure New York militia bill adopted by the Provincial Congress in August of 1775, which required militia flags to be affixed to the outside of the commanding officer’s house or barn to rally the troops in times of need — and if that’s what the Hulbert flag was used for, it would account for its size and the fact that it doesn’t possess a sleeve or heading. This brings to the forefront the idea of the Hulbert flag as an alarm flag, the barn being the rallying point, so close to the Triangle Commons.

In 1999, the Hulbert flag was examined by Rabbit Goodie of Thistle Hill Weavers, a historic-textile conservator. Her report states that the flag is consistent with textiles produced on Long Island in the 18th century and that it is authentic in origin. Reached by phone recently, Goodie said that she stands by these assertions.

Jeff Bridgman, a leading authority on antique and early American flags and a top advisor to museums and collectors, recently had the chance to view photographs of the Hulbert flag. “This is certainly early,” he said in an email, “but it’s something I would like to see in person. Between the cotton thread and the images, I’d say War of 1812 to 1830s. It’s not what I expected from the image, but I might think differently in person.”

In light of this validation by scholars and experts, the matter perhaps begs a second look through 21st-century eyes. The evidence is compelling that a new examination is required.