Fast-growing sugar kelp is a natural wonder, from the nutrition it offers to the CO2 it sequesters. Christopher Walsh checks in on its cultivation here. 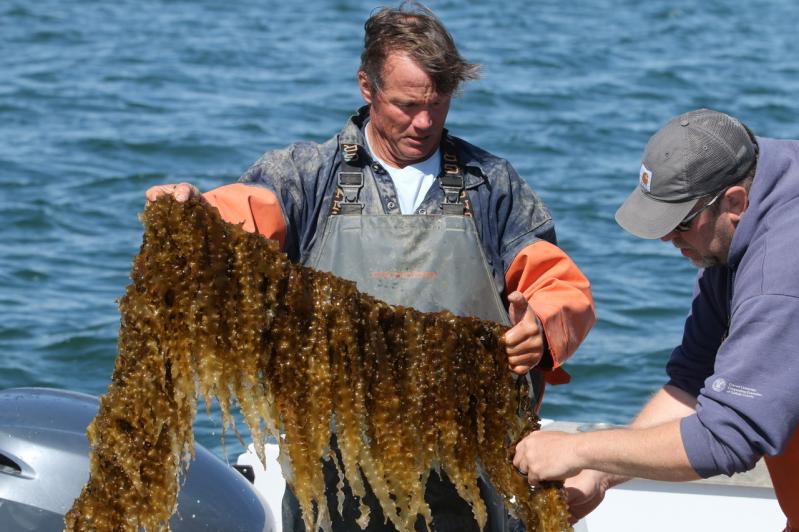 Mike Martinsen, a Montauk oyster farmer and East Hampton Town trustee, grew two lines of sugar kelp in one of his aquaculture plots as an experiment. With him was Stephen Schott of Cornell Cooperative Extension.
Rory MacNish
By Christopher Walsh

What could be finer than local waterways teeming with oysters? The filter-feeding bivalves are not only a delicacy, an economic boon to aquaculturists and a gastronomic delight to the rest. They also help remove excess nitrogen from the water, cultivators arguing that the practice is essential to mitigating conditions that promote the harmful algal blooms that have fouled waterways across the South Fork and the wider world. A single oyster can filter up to 50 gallons of water a day.

But we can do more to remediate environmental degradation. Like the oyster, sugar kelp is a natural wonder. The species has multiple uses: as nutritious food for human consumption, as animal feed, as fertilizer, and as biofuel. Seaweeds also sequester carbon dioxide, countering the acidification of the oceans that results from absorption of carbon dioxide from greenhouse gas emissions. They also serve as habitat for juvenile shellfish.

Kelp is one of the fastest growing vegetative organisms in the world, second only to bamboo, and takes in five times more carbon than most land plants can. It sequesters more carbon than eelgrass, mangroves and salt marshes combined based on biomass. Industrial-scale cultivation would complement shellfish aquaculture: it grows from winter through spring, while shellfish farming is typically a spring-through-fall practice.

Seaweed farming is the fastest growing aquaculture sector, according to the National Oceanic and Atmospheric Administration, and shellfish farmers, conservationists, East Hampton Town, and New York State are taking action. Companion bills in the State Senate and Assembly would permit kelp cultivation in underwater lands at Gardiner’s and Peconic Bays, and allow Suffolk County to lease underwater lands for that purpose.

On the recommendation of its water quality technical advisory committee, the East Hampton Town Board voted unanimously last month to allocate $14,660 to the town’s shellfish hatchery for development of a kelp nursery and grow-out program. Hatchery personnel will set up 100-foot-long experimental lines of kelp in the ecologically distressed Three Mile Harbor and, possibly, Accabonac Harbor.

Once it has absorbed nutrients and is removed from the waterways, the hatchery’s kelp will be used as compost, said John (Barley) Dunne, its director. “It’s exciting,” he said. “The big picture is capturing nitrogen entering waterways and ‘keeping it local’ by recycling it.” Ideally, this would reduce the volume of tractor-trailers trucking fertilizer to eastern Long Island, where it goes onto perfectly manicured lawns before its inevitable migration to waterways via surface water runoff.

“We still need to deal with septic systems,” seepage from which is blamed for the excessive nitrogen and phosphorous that promote harmful algal blooms,  Dunne said. “But kelp is growing very well in shallow water in Moriches Bay,” to the west. “It’s exceeding expectations. I’m hoping we can get good production here.”

Mike Martinsen, owner of Montauk Pearl Oysters and an East Hampton Town trustee, is also a proponent. “As a shellfish aquaculturist, the biggest profit I get to reap is taking pride that I give back to the bay with the efforts I put in. I’ve learned that kelp farming is very, very good for removing excess nutrients from the water. It’s a nice bonus to add that to the oyster farm.”

Martinsen grew two lines of sugar kelp in one of his aquaculture plots in Lake Montauk on behalf of the Moore Family Charitable Foundation. “Our primary goal,” said Wendy Moore, “is to set the stage for companies who want to make their own business out of this.” The foundation is laying the groundwork to help small businesses gain expertise in seaweed cultivation for implementation in their products, or on their menus.

Sean Barrett, a co-founder of Dock to Dish, which delivers fresh seafood to its members, recently launched Montauk Seaweed Supply. Last month, at its dock in Montauk, it took its first delivery of kelp from New England, which it will convert to fertilizer.

Kelp farming is well established in New England, he said, particularly in the deep, clean waters off Maine. “They don’t have water quality issues,,” but do have plenty of “latent infrastructure and built-in, much lower labor rates.”

Barrett predicts “a very tall mountain to climb before kelp becomes approved as a foodstuff in New York State,” owing to layers of regulation, including by health officials. But Scott Bluedorn, an East Hampton artist and environmentalist, isn’t waiting for government action. He harvests wild kelp off Montauk Point for food while awaiting state sanctioning for commercial kelp farming. “There are a lot of ways you can use it,” he said. “I mostly put it in soups as a seasoning, but also in salads, omelets, and you can make a crisp out of it, like chips. It’s altogether a very healthy thing.”

Bluedorn helped to raise public consciousness of kelp cultivation when he addressed the town trustees, who have jurisdiction over many town waterways, last winter. “I’m glad that it’s happening now,” he said. “We’re, like, 10 years overdue. New England has been at it for a decade or more. Maine, California, Alaska — they are all way ahead of us.”