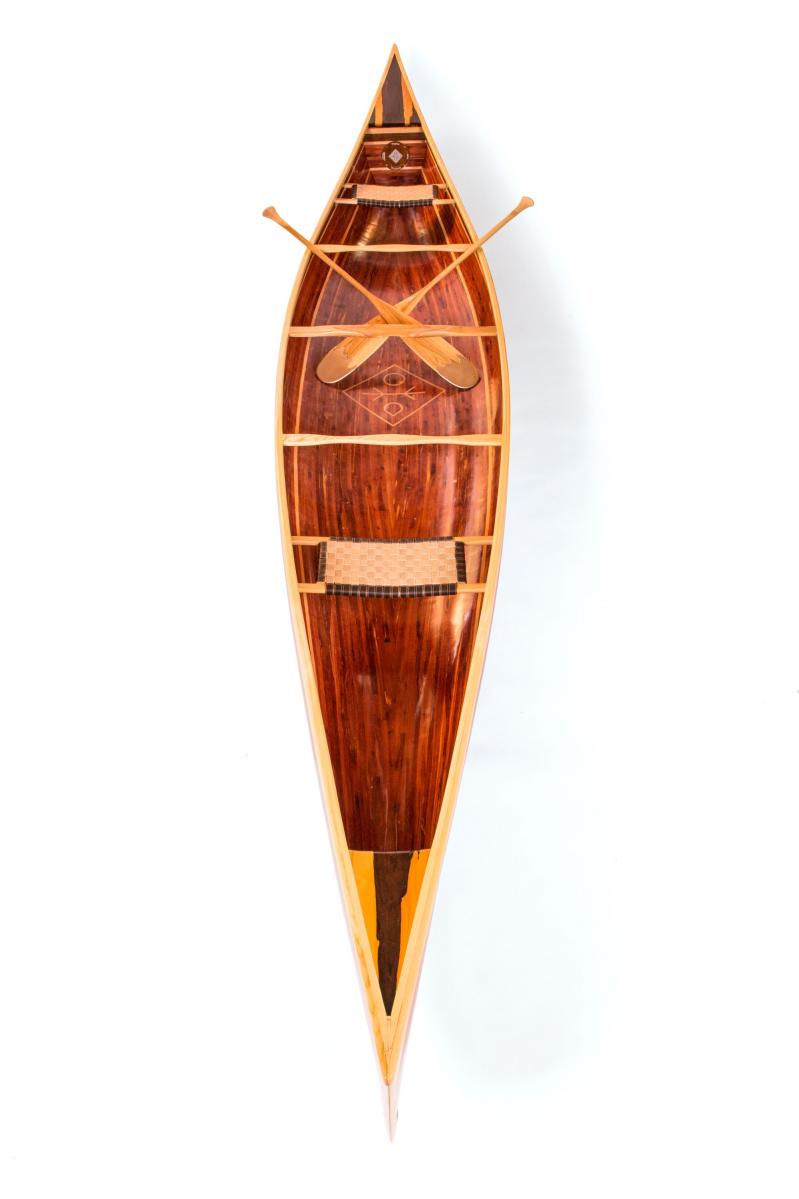 The canoes, and more about their unique construction, can be found on preszlerwoodship.com. About $100,000.
preszlerwoodshop.com
By David E. Rattray

Unlike fiberglass, unchanging and inert, wood flexes and moves, it must be cared for, and it is temporal, decaying ever so slowly with anything less than the best of care. Trent Preszler’s exceedingly limited-edition canoes deserve that sort of care. Each is built to order in his North Fork woodshop and takes about a year to complete, give or take.

Narrow strips of sawn red cedar laminated over a frame form the basic shape of the hulls. Preszler carefully smoothes the surfaces inside and out by hand. He will put juniper, walnut, Alaskan yellow cedar, purpleheart, and zebrawood into his canoes as the spirit moves him. Custom bronze fittings are made by another North Fork craftsman.

In a backyard in Mattituck, an unexpected craftsman creates an incredibly precious watercraft.

He came to working with wood late and by a surprising path. In his memoir, Little and Often, released earlier this year, he describes a box of tools, his sole inheritance from his estranged father, that was the spark — that and the series finale of Parks and Recreation, in which Ron, a gruff outdoorsman played by Nick Offerman, paddles away into the sunset in a handmade canoe. Mere mortals’ first homemade boats more often than not are plywood clunkers that are soon abandoned after their builders realize they took on more than they could handle. Not Prezler’s: Though he barely knew one end of a chisel from another, with the help of books and YouTube, he dived in and, 14 months later, emerged from his Mattituck backyard workshop with 20 gleaming feet of near perfection.

Making Preszler’s watercraft craft more remarkable is that he practices almost entirely nights and weekends. His day job is as C.E.O. of the movie producer Michael Lynne’s Bedell Cellars, a 200-acre winery in Cutchogue. Despite his successful wine career, he says, it was only when he started making canoes that he felt that his life had a sound footing. His father’s tools, he wrote, “were not so much inanimate objects as extensions of who I was and symbols of the past that shaped me.”

Preszler grew up on a 10,000-acre beef-cattle ranch on the Missouri River in South Dakota, near the Standing Rock Sioux Reservation. He was one of eight students in a one-room schoolhouse. After graduating from Iowa State in 1998, he had a six-month internship in the White House Office of Science and Technology. He studied botany in Scotland and agricultural economics at Cornell, where he completed a horticulture Ph.D. in 2012, all the while working his way up at Bedell from salesman. Along this way, his Instagram, where he documented every step of progress on his first canoe, gained more than 135,000 followers.