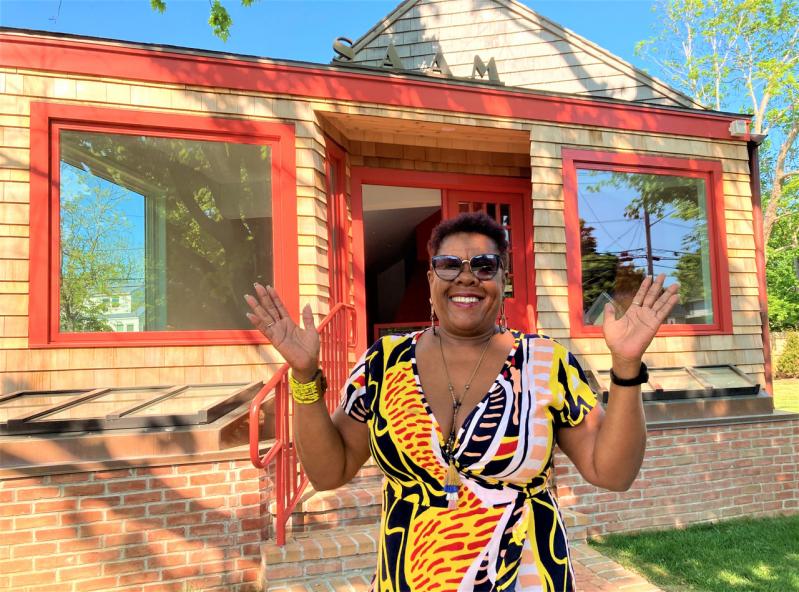 After 16 years of effort, the Southampton African American Museum opened in June. Brenda Simmons was on the frontlines.
Tom Edmond
By David E. Rattray

This past June was a very big month for Brenda Simmons. The co-founder and executive director of the Southampton African American Museum finally was able to open its doors in a former Black barbershop and beauty parlor on North Sea Road. For her, the 16-plus-year journey to get to this point was personal.

Simmons’s family was part of the Great Migration of the American 20th century. As was common among people from the South, an elder sibling came out first, Simmons’s Aunt Finny, who went to Harlem from Waverly, Virginia. Another aunt followed, then her mother, the more aunts — eight siblings  in all. Some 16 million people left the South during Jim Crow, fleeing segregation and a context of violence being passed down by white parents to their children. Her father, Noah Simmons, and his family had come north, too, leaving Currituck, North Carolina amid hope for a better life.

An aunt who had a beautician’s license was the first in the family in Southampton and worked in the late-1940s-early-1950s-beauty parlor and barbershop, and Brenda Simmons, then 12 or 13 years old, would answer the phone and take appointments. There were two doors on barbershop, one on the right for the women, one on the left for the men. By no means were the girls allowed to go over to the other side, though from time to time Brenda would peek in to see what the salty languaged world of the men was like. Southampton had juke joints then, one called with perhaps more than a little dose of intentional irony, the Coal Bin.

Her father established a landscaping company and took care of properties on the fancy Meadow Lane side of town. Her mother, Pearl, worked in the Sag Harbor Bulova factory and later as a nursing assistant. Nights, Mr. Simmons owned and operated the Cottage Inn on the road to Springs in East Hampton, now the town senior-citizens center. Acts including James Brown and Aretha Franklin passed through the juke joint and restaurant while Simmons was young. Even Steve Boone of the Lovin’ Spoonful, then playing with the Kingsmen, had an early gig there, which the bassist recalled in his autobiography.

Their house on Halsey Avenue is gone now, replaced by a spec house. Another barbershop, Mr. Bob’s, with a jukebox and pool table, and, past that, a candy store, neither of which remain. “Those places are gone within the last couple of years. You would never know, you would never know, that this all was there. That was the black community,” Simmons recalled. As prosperous as this new Black Southampton middle class was, the area was still referred to by outsiders as “the Ghetto,” which tamped down property values.

Racism was always there, Simmons said, but most of the time, not on the surface. There were clues, though. Parents would not allow children on Job’s Lane, but not say why. Once, when she was a teenager, she and a few friends were out riding in a car and  finally made the turn from Main Street and rolled along Job’s Lane looking at the shops. Everything was fine until they reached the corner, where, as Simmons recalled, “A white guy said, ‘What are you ‘N words’ doing here? That happened, right here in good, old Village of Southampton.” This was in the early 1970s or abouts.

Simmons was a member of the class of 1973 at Southampton High School, where she had taken part in a sit-out by students demanding a Black studies class. She did not sense prejudice in the classrooms, but there were divisions. Guidance counselors did not really encourage the Black kids; it was the older kids and the parents who did that, she said. Once, when she was asked to go to the prom by a white friend, her parents said no. “I still got to dance with him at the prom,” she said with a laugh.

For many years, Simmons worked in Southampton Village Hall, where the seeds of the museum were first sown in the form of Black History Month exhibits of local student art. Even then, she would push things — the show would go up in January, around Martin Luther King Jr. Day, and stay on view into March. Before SAAM had a home, Simmons curated exhibits of Black artists at the Southampton Historical Museum, and she  became deeply involved in an effort to rebuild a Pond Land house that had belonged to Pyrrhus Concer, who had been enslaved when he was young then became a whaler, business owner, and philanthropist. Concer is believed to have been the first Black American to visit Japan, arriving aboard the whaleship Manhattan in 1845. He and his wife, Rachel, became members of the Southampton First Presybyterian Church in 1847 and spent the rest of his life in the village, save for a stint in California during the Gold Rush.

Pushback to the museum plan began about the time it became known that Southampton Town had bought the old barbershop property from Randy Conquest, who had bought it from Seymore, for $500,000 using money from its dedicated preservation fund. Nonetheless, an official told her that there had been a flood of phone calls, most along the lines of, “Why did the town spend our taxes on that piece of shit?” Simmons said that this cut deep and “added to the rows of Nimby scars of the past.”

“Opening this museum is obviously a rewarding milestone. To be instrumental in being a major part of establishing not just one but two African American sites in ‘da Hamptons’ is a humbling but profound legacy to leave,” she said recently.

Since retiring, Simmons has spent more of the winter months on St. Martin, relaxing and hanging around with reggae musicians (keeping her young, she says). In 2017, following category-5 Hurricane Irma, she organized shipments there medical supplies with donations from Stony Brook Southampton Hospital and a generous pharmacy. Time away in the sun, she said, helps give her the stamina to see the museum through to completion. The inaugural exhibits are “Grooming a Generation — A History of Black Barbershops and Beauty Parlors” and a selection of African American art from the collection of Peter Marino. The museum is at 245 North Sea Road, summer hours are evolving and will posted, saamuesum.org

“A lot of the Black families are gone now,” Simmons said, and that is what she wants the museum to say: “That we were here. We are here.  And we’ve contributed a lot to the Town of Southampton.”