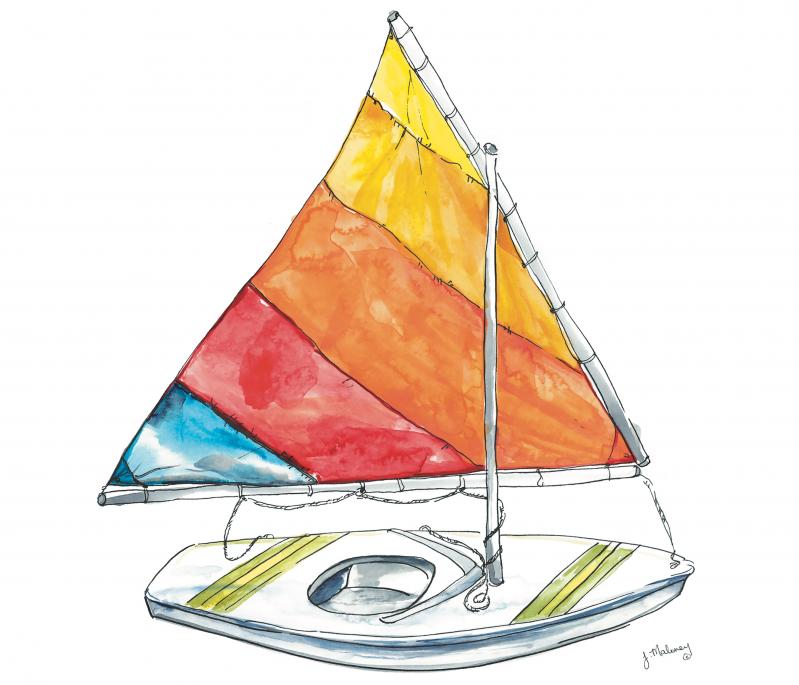 The most popular sailing dinghy in American history went into mass production 60 years ago in Connecticut. Today, you can get one — with choice of sail-stripe colors — for around $4,000.
Jackie Maloney illustration; jackiemaloney.com

Let’s all raise a glass to the Sunfish, that nearly ubiquitous icon of the American shoreline, a single-sail fiberglass boat that has glided, bounced, carried young love, and, often, flipped across lakes, harbors, and bays since the early 1950s.

The Devon Yacht Club on the shore of Gardiner’s Bay has kept the Sunfish flame alive nearly all that time, setting up a racing class there in 1962. Though they are simple to sail, they are not solely fair-weather craft. During one famous early Devon regatta, held on Columbus Day weekend in 1964, the winds blew in excess of 35 knots; fewer than half of the 42 boats that entered made it to the finish line.

Sunfish are about as basic as a sailboat can be. A standard-size hull of 13 feet, 9 inches stem to stern features a well, or “tub” as some call it, where one or two adult sailors can put their feet. The mast is a relatively short aluminum tube that fits into a golf-hole lookalike in the deck. The sail, basically a triangle, is controlled by a single main sheet. There is a centerboard and a tiller to steer with and very little else. Forget about cargo; there is not even a single cleat or tie-down to make your lunch fast to.

By now, several generations of sailors have gotten their start on Sunfishes, which have scarcely changed since Alexander Bryan and Cortlandt Heyniger put a sail on a wooden rescue board in Waterbury, Conn, calling it first the Sailfish. That was in 1947. Three years later they modified the design, adding the tub to accommodate Bryan’s pregnant wife . . . and the Sunfish was born.

By 1959 — that is, 60 years ago this summer — the fellas were selling the rig under the Alcort brand (as in Alexander and Cortland), and had begun fabricating it out of fiberglass — an innovation that made it much more affordable, allowing for the Sunfish to become the most popular mass-market sailing dinghy in American history.

Ownership of the design has passed through a few hands since then, and today it’s the property of Laser Performance, which, thank God, continues to manufacture it in all its striped glory. Rigged with a basic setup, the boats can be bought for about $4,000 these days.

Gratuitous celebrity stamp of approval: When he is in residence at his East Hampton Town aerie, Sir Paul McCartney makes time for long, private sails in his very own Sunfish. Gratuitous sex angle: One middled-aged man of our acquaintance boasts of a teenage spree in which he sailed in his Sunfish with a girlfriend from Springs to Cartwright Island, where they did the frickle-frak right there on the sand. Such is the stuff summer memories are made of.