The time’s come to do more than lip service to the dictum reduce, reuse, recycle. There’s a beauty to taking the time to have things repaired — and, as Cornelia Channing reports, more than a few experts still ply a specialized fix-it trade 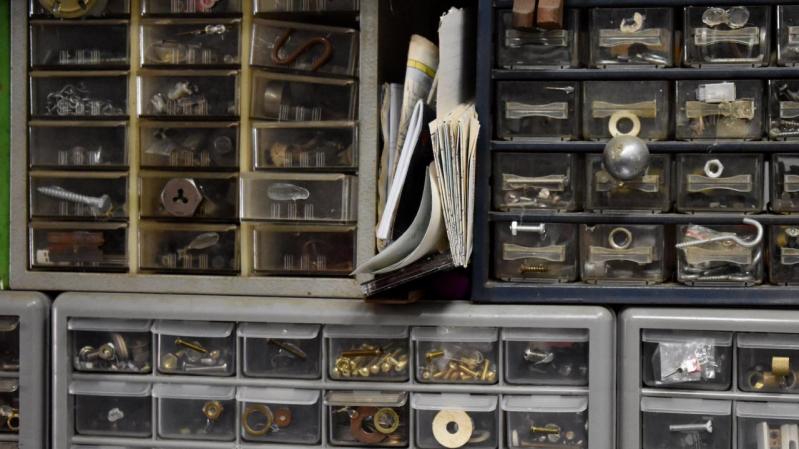 When was the last time you had something fixed? Reupholstered a chair? Brought a dress to be hemmed? Had an old stereo rewired? To someone born after 1985, these efforts can feel antiquated, effortful, slow. The kinds of chore we might think about but will never really get around to doing — like getting car tires rotated. We know we should, but it’s just not that pressing. Who has the time? And where would you even go?

Broken items end up sitting around, taking up space in the unattended corners of our homes and psyches — the lamp that started flickering, the table with a broken leg, the camera with the faulty light meter — until, one spring morning, in a spirit of energetic cleanliness, we say enough is enough and throw the item away. After all, we can always just buy a new one.

We are living in an era of abundance, when goods of all kinds, from clothing to electronics to furniture, are available almost instantly and at inexpensive prices. The shadow of this abundance is a culture of disposability. Objects have begun to feel impermanent, un-unique, and ultimately, their value in our lives is lessened. Think about the objects in your life that carry meaning, that have stories attached to them — your father’s old cast-iron pan, the record player that lived beside your bed throughout college, the dented bicycle you first learned to ride on. Most of us would be willing to spend the time and money to fix these objects, but we won’t put the same energy into fixing the wobbly Ikea lamp because we can order another one on our iPhone, today, with free delivery, and it’ll be at our doorstep tomorrow.

This is, of course, a sustainability problem, contributing to our country’s astonishing waste. But it’s also a cultural issue. The rich heritage of specialized trades has been starved out, nearly to the point of extinction. Fewer people fixing things means fewer places to get things fixed and fewer people who know how to do the fixing — a cycle that leads to ever more instant consumerism, more buying of things that will before long be thrown out.

Fixing what you already own rather than continuing to buy new is one of the best and most concrete ways you can reduce your personal footprint. Every time you get a pair of jeans tailored rather than ordering a new one online, you are divesting from a culture that is destroying the planet. There are 450 million pairs of jeans sold in the U.S. every year. Do we really need more?

But the argument for fixing goes beyond simple do-gooder environmentalism. It can improve your life in other, more personally gratifying ways, by helping to re-establish meaningful relationships with the objects you surround yourself with and bringing you into contact with some interesting people.

Russ Calemmo is the doctor on duty at the Lamp Hospital, the storied workshop near Three Mile Harbor where the master electrician specializes in the preservation and restoration of cherished electrical fixtures.

The hospital is a garage and a large tent behind Calemmo’s home. It is a visual flight of fancy, the space crowded from floor to ceiling with strings of multicolored lights, lamp shades of every imaginable shape and size, unnameable tools, and what appear to be household knickknacks. Above a table hangs a line of tools, recalling an operating room which, well, this sort of is.

Russ has been keeping odd hours (8 a.m. to 10 a.m. weekdays) at this work table since 1974. He offers a wide array of services including repairs to table and floor lamps, candelabras, wall sconces, and chandeliers; he will also construct new lamps out of found and refurbished objects. “I can make a lamp out of anything.” he says.

He’s only ever said no once. That was when a customer arrived with two large land turtles, both alive, that he wanted turned into wall sconces. Russ was forced to slightly change his tagline: “I can make a lamp out of anything. So long as it’s not alive.”

It’s exacting work, demanding a combination of technical expertise and free-thinking creativity, and almost noone offers the level of design inginuity that Russ can.

Russ loves the work. He’s been making lamps for as long as he can remember and even points out the first lamp he ever made, which sits tucked behind its siblings on a shelf. But even more than the lamps themselves, Russ loves the stories that come with them.

“Lamps can tell you a lot about a person,” he says. The Lamp Hospital, 238 Three Mile Harbor-Hog Creek Road, Springs.

Nancy Nano learned to use a sewing machine as a girl living in Lima, Peru, where her mother taught her to hem dresses. For as long as she can remember, clothes have been her passion and she’s built a career as a designer and expert tailor. In 1991, after studying clothing alteration in Peru, she immigrated to the United States where she worked for a wide cast of New York fashion designers before settling on the East End.

For the past 22 years, Nancy has honed her skills as a seamstress and tailor — happy to take on any project, big or small, from patching a pair of jeans to resizing a wedding dress.

“I like making people feel beautiful,” says Nancy, whose radiant smile and can-do attitude have earned her a loyal following at her little tailoring business on Noyac Road.

While fast fashion has become the mode of the day, few people think about how destructive their new seasonal purchases are to the environment. Not only is the fashion industry mind-bogglingly polluting, responsible for 10 percent of the global carbon footprint, its international structure has had a devastating effect on small businesses in poorer nations, where many people dress in cast-offs from North America — a cycle that has crushed local fabric factories and clothing manufacturers.

Are your kids’ hand-me-downs looking too baggy? Is that new shirt not sitting right? Want to transform those vintage mom jeans into cool mom-jean shorts? Let Nancy work her magic. She offers a full spectrum of services, from re-sewing a button or fixing a split seam to altering a tuxedo or prom dress. (Keep in mind that she’s “cash only.”) Nancy’s Tailoring, 3334 Noyack Road, Noyac.

For more than 50 years, Orazio Cacciato has been a cobbler. He is 84, but, with his muscle shirts, his smooth face, and strong arms, looks much younger. “I have probably fixed more than 10,000 shoes in my lifetime,” he says.

A visit with Mr. Sunshine is like visiting a favorite uncle: Cacciato holds court, spinning funny stories, dishing out advice, and singing along to Frank Sinatra records. He punctuates his conversation with many gestures of the hands and shoulders, and will, charmingly, talk your ear off for 15 or 20 minutes without so much as a breath. He begins many, if not most, of his sentences with: “Let me tell you something. . . . ”

The well-shod denizens of West-
hampton and Southampton trust Cacciato implicitly with their Manolos and Choos. In his atmospheric workshop, surrounded by all sorts of interesting old tools — even the cash register is an ornate antique — he also repairs belts, wallets, and other small leather goods. Mr. Sunshine Shoe Repair, 146 Mill Road, Westhampton Beach.

“It’s fun having sharp knives!” says the proprietor. “Especially now that it’s tomato season.” We wholeheartedly agree, and consider this service to be not just essential to a well-run — and conscientiously run — household, but also a perfect and clever house gift, from weekend guest to host. They actually make house calls, picking up your knives, offering advice on which need sharpening if you like, and returning them to your door safely bundled within a day or two. This is a mobile business without a fixed address that has become a fixture at the Springs Farmers Market. If you’d like the door-to-door service, Sharp Cat can be reached at [email protected] or 631-458-5350.

Recently, the Sharp Cat folks have been collecting quality knives from thrift shops, such as the Ladies Village Improvement Society Bargain Box in East Hampton, and upcycling them for sale. Knives from the 1940s and 1950s, apparently, are simply much better made. (Hint: If you happen to be out thrifting and come across an old knife that looks very solid but tarnished, with dark markings on the blade, grab it — because there’s a good chance it’s carbon steel, which can be honed to a beautiful sharpness but is often cast aside because consumers don’t like the look.) Sharp Cat Knives can be found at Springs Farmers Market, every Saturday at Ashawagh Hall.

Need to keep a high-fi stereo spinning or a television in tune? Try Gannon TV and Audio, 32 Jefferson Street, Sag Harbor; 631-725-1841. Has your grandfather clock given up the ticktock? Sands Point Shop Clock Repair Service in Port Jefferson will make house calls to the East End; 888-321-9477. No one wants a hole in the screen door during mosquito season, which is why we’re grateful for the screen-repair services at Village Hardware; 32 Newtown Lane, East Hampton; 631-324-2456. Finally, James O’Mara in Amagansett can fix broken caning on chairs, settees, and other furniture; 631-267-8038. •