The Southold artist Michael Combs comes from a long line of Long Island hunters and baymen who made a hard living off the land. In his work, both gorgeous and grotesque, he draws a bead on the masculine culture of killing — of forever taking more from the bleeding Earth. 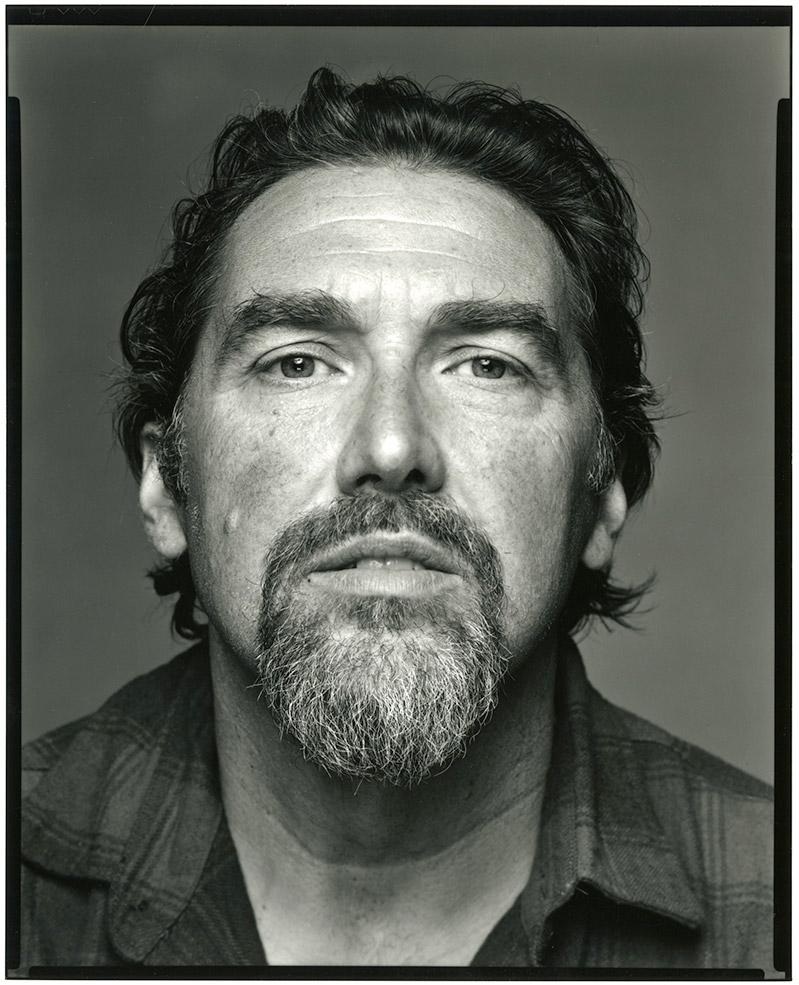 As a North Fork boy helping his father carve decoys and clean waterfowl after other hunters’ hunts, he developed — and the writer Amei Wallach noted in an essay on Combs — an “empathy with the targets of the slaughter.”
Michael Halsband
By Biddle Duke

Michael Combs was going to be a plumber, or perhaps work on a New York City tugboat, like his dad. He was learning plumbing in high school in the 1980s in Greenport, and a skill in the trades promised job security and income. He’d grown up among baymen, market gunners, and hunting guides — hunters, foragers, and fishermen, many of whom were also, by need and nature, artists: decoy-carvers, lure-makers, self-sufficient men and women who could fix or build most anything. Young Combs watched and learned. As a boy he could identify every species of fish and mammal in these parts; he could clean them; he could find a merganser’s lungs, a mallard’s heart, if you asked him. He recognized the signs in nature: when the monarch butterflies are on the water, it’s time to fish for sea bass; when the ospreys fly away so do the stripers.

He fished, but it was hard work and the pay was poor. Mostly, though, he carved.

“I learned to carve just hanging out with my father and grandfather at work,” he said recently.

By the age of 16 he’d made his own workspace in the family household, carving and teaching others. He loved to draw, so he drew, too. In those days he could look around at his world on the North Fork and recognize how seamlessly he’d fit into the Combs family story that goes back centuries in the region. He could travel the familiar road, fishing and carving, maybe making some extra dough plumbing all the new houses that were springing up everywhere.

But as an ambitious teenager he was keen enough to see that making a traditional living along these shores was only getting harder. And there was another thing, something much more intangible: a creative itch handed down through the Combs family. These were larger-than-life rough men who could nevertheless sit quietly and carve a perfect, delicate thin-legged plover.

Michael Combs just had these stories to tell.

In any life you can look back at certain moments and see how so much turns on them. Combs assembled a portfolio of his drawings and his carvings and applied to art schools. It was no small matter that this decision came with the encouragement of his father.

“I loved to carve, I competed [in decoy-carving contests], and eventually it became what got me in to art school,” Combs says.

His move to New York City to study at the School of Visual Arts was a doorway to a new branch in the Combs family story. He seized the city experience and the friendships and guidance he would find there, and over the course of the past three decades he’s crafted his own sculptural language. And although quintessentially contemporary, his body of work is as earthy and salty and tough and uniquely New York as his earthiest, saltiest, toughest Long Island ancestors.

His art reflects a love of nature, and of the old, hardscrabble ways of making a living along the shore. But his sculpture transcends these nostalgic memories: Rather, his pieces are adult ruminations on the world of bloodsport and on the taking from the seashore.

From an early age, Combs was into the aesthetics of it all and uncomfortable with some of the ugliness and contradictions — the killing, the carnage, and the ego-driven competition around the professional hunt (and even around the growing decoy-carving market).

He developed, as the writer Amei Wallach noted in an essay for a book on Combs, “an empathy with the targets of slaughter.”

“[M]any hunters we knew often overshot their limits in somewhat of a frenzy, and they would leave the birds for my father to deal with,” Combs told Terrie Sultan in a 2005 interview. “And as the youngest hunter, it was my fate to have to clean the birds, which I did out of a sense of duty to not let them die in vain.”

Combs, now 50, has become successful by the standard measures. His work is in major private collections, he’s had shows at prominent New York and regional museums and galleries, and had prominent media recognition. But a major museum show is missing from that puzzle and, in a chat in October, he doesn’t disguise his ambition.

Living now in Southold, having left the city to raise his son, Sailor, 17, Combs is working on a body of new work for what he hopes is a major show in a year or two.

“I’m doing everything to keep 15 to 16 pieces uninterrupted,” says Combs (and when he says “uninterrupted,” he means that he tries to keep them part of one creative thread in his head).

On a recent visit to see his art and home turf, the first stop, at Combs’s insistence, is his father’s decoy shop. The shed at one time stood on the Combs homestead on Peconic Lane, but has been moved to the Hallockville Museum Farm on the outskirts of Riverhead.

Although he wasn’t here on this visit, Jack Combs, now in his 80s now, still comes around to the shop on some days to sit and carve. He is one of the attractions of the museum.

The family’s work is in the White House, the Smithsonian Institution, and in noted private collections. But the entire arc of the story of decoy carving — a utilitarian craft that has become high art — is all right here. From the hands of working men who carved out a life on the bays emerged an art form worthy of the grand halls of the wealthy and powerful.

Inspecting one tool after another, then carefully cradling a delicate wooden plover (which were hunted around here at one time), Michael Combs seems to be talking to himself.  “How could you not? . . .” his voice trailing off, his meaning left to interpretation. Not become a carver? Not cherish  this shed holding all his heritage, his family’s story?

With quiet pride, Michael — a big, bearded, and disarmingly gentle man — glides around the small space, which is cluttered with centuries of decoys, exquisitely painted decorative shorebirds and ducks, fishing lures, tools, newspaper and magazine clippings about gunning on the Peconic and Great South bays, old oyster tins.

His own new work, in various stages of completion in his Southold studio, is part political parody and part paean to a lost past. A stout tugboat, the U.S. flag upside-down on its wheelhouse, tows a sinking barge of gold. A sperm whale, breaching from a rolling wave, fires silver, gold, and blood-red metal flares from its blowhole. Two carvings of 1957 Mercury outboards pulling Adam in one direction and Eve in the other; they are wearing football helmets. “Adam and Eve have to save the world from environmental carnage,” Combs explains.

“I’m not toying around with this,” he says. “I’m working on environmental issues, race, political stuff.”

Everything could change, of course. The show, which is all conceptual at this point, is more than a year away. But it’s all going to happen. Combs has shed the doubts of youth.

It has taken a long time to gain that confidence. Right out of art school, his work was spotted by James Cohan, the mover-and-shaker Manhattan gallerist, and soon was seen in a show alongside that of Damien Hirst and Jeff Koons. Combs readily acknowledges that those two have shot into the stratosphere.

“I’m just me, doing what I do,” he says. “But suddenly, now — I’m not sure exactly why, but I have been thinking a lot about this: I can call myself an artist. I’m a sculptor not a decoy-carver . . . so now I can get moving, and when you get that kind of energy, that’s the energy you want to get on. And I’m on it.”