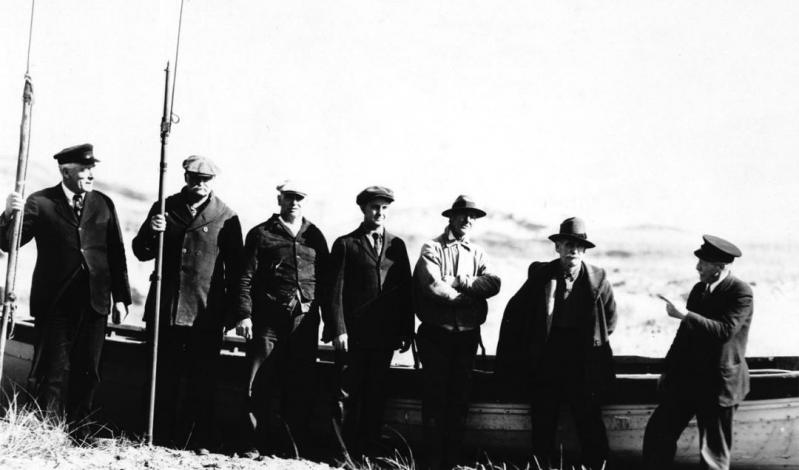 The right whale is an apt metaphor for a good magazine in the digital era: big, slow, mesmerizingly beautiful, and . . . verging on the edge of extinction. The sense of setting off into some unknown is also appropriate.
East Hampton Star archive.
By Biddle Duke

MY FRIEND David Rattray is descended from a long line of East Hampton and 'Gansett shore whalers, poets, businessmen, eccentrics, artists, and newspapermen, notably the owners and operators of The East Hampton Star, whose magazine this is.

The skeleton of the 54-foot right whale taken by David's great great-grandfather off Amagansett on George Washington's birthday in 1907 once dominated the Hall of Ocean Life in the American Museum of Natural History.

David's great-grandfather Everett Joshua Edwards captained the last whaleboat to take a right whale off these shores. A photo of him appeared in Vogue in 1937, in a portrait taken by Arnold Genthe for an article titled "The Handsomest Man I Have Ever Photographed."

I'm not sure I'd call David the handsomest man I have ever met, but he does have a fine chiseled look. (And he signs my paycheck.)

It's shore whalers I'm thinking of these days as we make the first issue of the magazine.  When I came along a year ago with a sketch of an idea to start a magazine for The Star — beautiful, authentic, local (in short, The Star in stunning pictures and carefully edited words) — I might as well have said: "Whale off!" Because it was a whaler, a poet, a man happily haunted by the past who is deeply committed to the community his family has called home for 14 generations, who responded. "Assemble the crew, let's make chase!" David said.

The right whale is an apt metaphor for a good magazine in the digital era: big, slow, mesmerizingly beautiful, and . . . verging on the edge of extinction. The sense of setting off into some unknown is also appropriate.

"Are we close?" I've asked about the cover, the logo, the story list.

We're also a bit of Columbus to David's Spanish crown. We have succeeded in returning with gems about this place we love: the lyrical Carl Safina in this first issue, on watching tide and time pass on Lazy Point; Amanda M. Fairbanks, writer, and Michael Halsband, photographer, on the amazing family that made Round Swamp Farm; Amagansett's Irene Silverman on the legendary Evan Frankel; Andrew Blauschild on surfing; Michael Shnayerson on saving food farming here.

The logo - the name and look of the words EAST - on the cover were a test. Nothing worked. Then we found a sketch made in the summer of 1880 by none other than the artist Thomas Moran. Moran signed the piece and added a description: "East Hampton . . ." We copied the "East" and tried that for a while.  But an initial attraction to the "EAST" in The Star's original logo, hand drawn in the early 1900s, burned on, and eventually won out.

Because even as EAST observes and celebrates this region as it is today, we are rooted in the past.  We intend for EAST to stand out as the magazine for people who feel easternmost Long Island is home - could be your only or your second or third home, but home.

We'll make it stunning, like the communities it serves. In four issues this year, we (thanks to our advertisers) bring to you the people, the stories, the feeling that bind us here.

"Spring on!" David might well have said, relieved that the logo hand-wringing was over, words his forefathers used to encourage whaleboat crews through the surf. After whaling ended in 1918, Everett Edwards used to go to his daughter's barn where his 28-foot New London-built whaling boat was stored and "just sit down for a while." No barn, no whaling boat, but we hope you'll sit with EAST for a while.