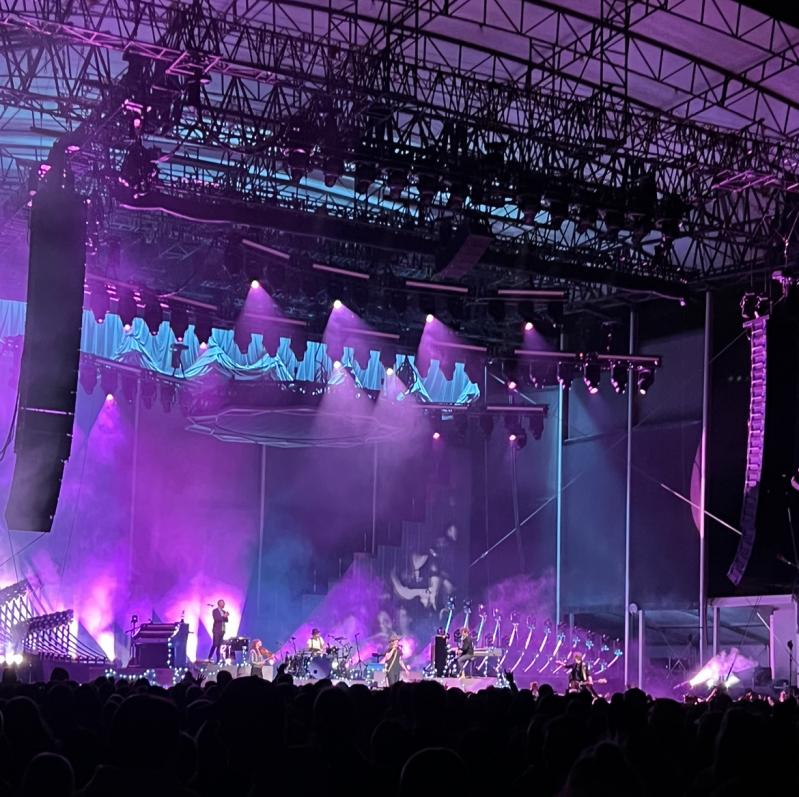 I’m guessing it’s the iPhone / social media / Spotify revolution that leads half a stadium to know every word of all of a band’s lyrics. The repetition. Plug in your earbuds and it’s any tune you want, anywhere, any time of day.

The occasion was a blustery June Saturday night at the West Side Tennis Club’s Forest Hills Stadium in Queens, which very much still touts its storied tennis history, but which last held a U.S. Open in 1977. Someone out there might even remember it, the Argentine longhair Guillermo Vilas, asymmetrical with his racket-handling left arm muscled to the point of dwarfing his ill-used right, beating back tennis’s answer to Charlie Hustle, Jimmy Connors, for the title in four sets, with a tiebreaker thrown in. (And when I put it that way, why wouldn’t the place celebrate its past?)

But the concert, the world’s biggest sing-along, was courtesy of the Lumineers, as they closed out their East Coast shows before heading for the hinterlands. First, I noticed with pride my 19-year-old daughter’s familiarity with every last note, all the chords struck. I say “pride” because, have you heard popular music lately?

These, on the other hand, were lyrics you could sink your teeth into, exploring addiction, life on the road, and, more than that, life and death in a rollover on an Arizona highway. Songs of escape, of draining a paltry savings account and getting the hell out of a stultifying town, or loser circumstances, songs, in that way anyway, worthy of a fellow New Jerseyite, Bruce Springsteen.

I’m still trying to figure out how they took intimate songs — songs at times almost folksy, what with the fiddle and the twanging, if amplified, acoustic guitar — and turned them anthemic. Songs that were big, somehow, emphatic, if that isn’t idiotic to say, and maybe it isn’t, given the thundering kick drum. The Lumineers once toured with U2, and you could see why, a complement to the Irishness and bombast.

The band was clearly grateful for what seemed like a reopening, in these nearly postpandemic days, the good will and fellow-feeling close to palpable. “We don’t take any of this for granted,” Wesley Schultz, the frontman, said from the stage. “Thank you for coming out to support live music.”

Happy to do it.