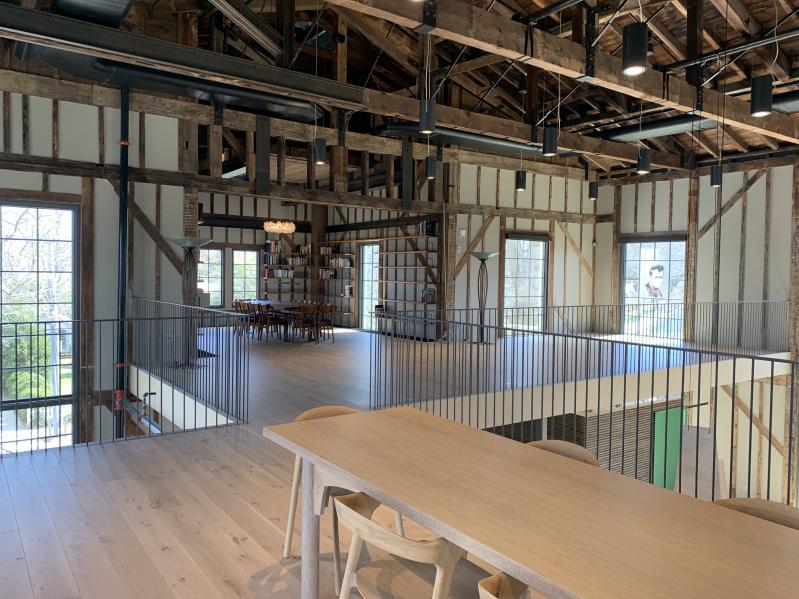 The Church’s nook of a library and study space is seen at rear. To the right of it is a rope for pulling to ring the old Methodist Church bell (which in the Hurricane of 1938 was sent plunging to the basement).
Julie Greene
By Baylis Greene

So I was standing in The Church, Sag Harbor’s newly opened exhibition space, retreat for artists, and relief spot from the cares and disappointments of the world, waiting in vain to tell someone, anyone, this story. That in 2003 and 2004 I’d written a series of articles tracing the travails of what was once the Methodist Church, starting about when the congregation bottomed out at a dozen souls. Which is pretty barren for a 9,000-square-foot house of worship. I wasn’t smart enough then to wonder if those congregants ever felt the presence especially strongly in the emptiness of those Sunday mornings. But I wonder about it now.

The Methodist Church for me will always be linked to another giant 19th-century structure, another preservation story from the early 2000s, Maycroft, Mary Aldrich’s vast former North Haven estate, once the Tuller School, once a nunnery. That was a dispiriting loss. The Church is a save.

And what a save. A soaring vertical space broken up by horizontal catwalks, railings, and landings. This is what preservation can look like? The building not only exists but can be entered. Countless board-feet of timber have been eye-pleasingly exposed. The place has been given new purpose.

On Friday that purpose was an opening show of photography by students from Pierson High, shepherded, you might say, by Peter Solow, the art teacher, and curated by the photographer Mary Ellen Bartley. Good stuff to look at abounds, open on weekends through the end of the month.

Full disclosure, my daughter Penelope has a couple of pieces on the walls, one nighttime shot of Sag Harbor imparting all the emotional desolation of a Gregory Crewdson tableau. (My heart sang with pride.) But then there’s Hudson Galardi-Troy’s self-portrait in duplicate. Just look at it and try to figure out how he pulled it off. Or Brooke Esposito’s mesmerizing extreme close-up of her younger sister’s eye.

These may not be the best of times for the changing village, but here was a positive turn, and the artists who’ve made The Church their baby, April Gornik and Eric Fischl, were there to greet and take interest in the students. At one point April Gornik could be overheard encouraging one of them to stop by sometime and make use of the small library’s study area. (That’s right, the kid does deserve a break.)

And history lives. Out on the sidewalk, as I was leaving, a woman of a certain age paused. “Oh! Is it open?” she asked before eagerly climbing the steps. “My children were baptized here.”