The deer I was prepared for. The rabbits I was not. It had been some years since I had kept a garden in any serious way. Living by a bay beach, my own trial and error experiments have taught me a little about what grows in the salty air and what does not. I have had little luck with carrots and peas; kale and tomatoes thrive. So do marigolds, happily, which I have been interested in since seeing a documentary at the Margaret Mead Film Festival in New York City about Hindu funerary practices on the banks of the Ganga River. The rabbits apparently drink from the same cup of enthusiasm.

A small litter of bunnies, born this spring, live somewhere under the bramble bushes on the edge of the driveway. How many there are, I don’t know, since only one or two at a time hop out to go marauding. Their marigold modus operandi is like this: They pass under the picket fence and nip marigold branches off at the stem, felling them the way a beaver takes down a tree to eat its bark. Once a branch is at their disposal, they eat it all the way from stem end to flower, which they leave alone, as if to taunt me. Oh, I know now how Mr. McGregor felt.

I suppose the rabbits are part of this year’s truly remarkable natural abundance, too, and that I should not be too irritated at them. Small, green tomatoes hang from twisted, burly vines that I must race to tie onto bamboo supports. Apples that I really should thin if I had the heart are fruiting out in clusters, like grapes. A doe that lives in my sister’s backyard and with whom I speak now and then is the mother of twins, which, while eating fallen black cherries, were startled this morning when I arrived in my truck. Mother simply stared.

Thankfully, the Amagansett deer are disinclined to mess with my tiny garden plot. One morning, just before dawn, three of them walked through it to get to our lawn, but that was before I had completed the fence to keep them out, so it really was my fault. One took a bite of peony then spat it out as if to say, “We’ve got an eye on you, bud.”

Despite the bunnies, a few of my marigolds have grown tall enough to escape. The lurid, orange flowerheads bob in the wind, luminous enough to draw the attention of the gods. I could put up low wire fencing to keep the rabbits off. But I don’t.

It is hard not to think there must be some kind of connection between all this nature turned aggressive and the current pandemic. It is almost as if it senses an opening. 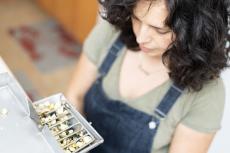 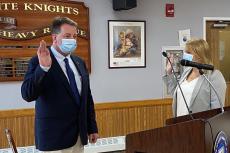 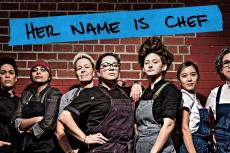 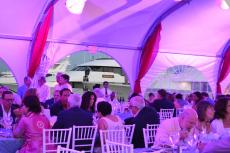