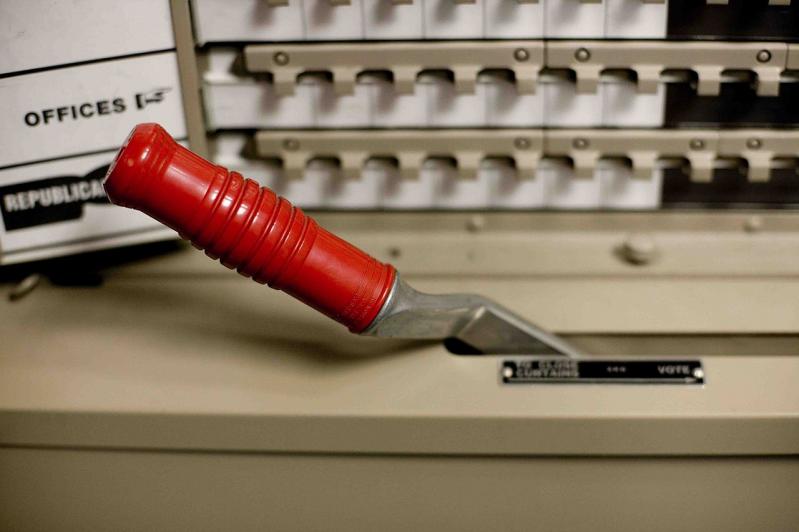 Holy Schenectady, do I ever miss the tactile pleasures of New York’s old voting machines.

The way those finger-operated levers would chunk into place as you flipped off your preferred candidate. (Word choice, I know, but still.) The gunmetal gray that combined with refrigerator girth to connote security, if not impregnability. How that drawn curtain ostentatiously cloaked a voter in his private moment of decision, before he grandly cranked the thing open like a carny setting a Ferris wheel in motion, finalizing the ballot, clearing the board for the next in line, and then the prideful stride out across the community house floor in view of his fellow citizens, having done his civic duty.

Good for a hundred years, why in the world were they ever put out to pasture? The push for technological advancement, no matter the cost, regardless of need, puts me in mind of that famous photo of dozens of decommissioned Los Angeles trolley cars stacked three high in a salvage yard, awaiting obliteration. That may be nostalgia for a better, happier America, while with the old voting machines there’s also a strain of, “If it ain’t broke, don’t fix it.” No fuss, no muss, no tampering, only analog solidity.

The still-newish ImageCast scanning machines used in Suffolk County may work just fine, if you can get past the jitters of seeing your precious vote tabulated digitally. Furthermore, they may not be hackable by malevolent homegrown geeks or Russian trolls. But that doesn’t alleviate the indignity of filling in little bubbles like a high schooler schlepping the SAT, or simply the act of uncapping that wimpy felt-tip pen dangling from a shoestring, half dried out.

The above was written Monday night, before my fateful trip to the polling station Tuesday morning, and I stand by my charge. As a denizen of the western portion of sprawling Noyac, I vote in the overlooked unHampton of North Sea, not far from one of the hamlet’s many dirt roads. But I come to praise the humble fire department substation, not to bury it.

As the storefronts of New York City get boarded up in preparation for riotous protests, as the plywood shamefully rises in even the nation’s capital, and after so many citizens scandalously had to wait hours just to cast a ballot, I have to say everybody should have it so easy — not only was there no line, the poll workers outnumbered the voters 10 to 1.

So, I’ll have to be content with the good of that outweighing the bad of the missing hand-operated voting levers. Barring some semi-plausible technological apocalypse, they’ll remain consigned to the great warehouse in the sky. Or Brooklyn.

As with the election itself, time to turn the page.