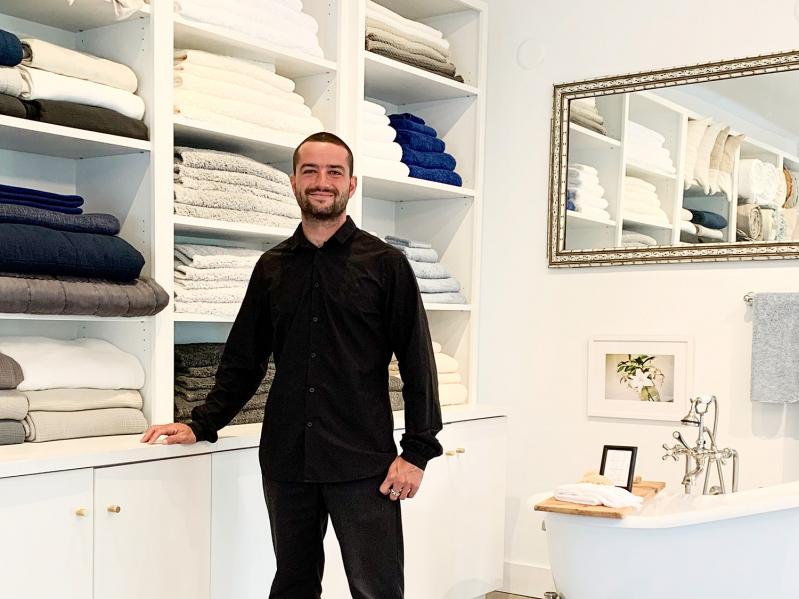 At French Presse in Amagansett Dylan Fowler is staying true to the vision of his late mother, Sarah de Havenon, who started the business, while also putting his own stamp on things.
Durell Godfrey
By Isabel Carmichael

French Presse, started in 2014 as a mobile linen laundering and pressing service by the late Sarah de Havenon and occupying a showroom in Amagansett Square since 2016, has settled into its niche and as of this summer is selling its own line of linens, glassware, and dinnerware.

He started helping his mother in 2017 when she became sick. He was working for a bank at the time, but eventually took a leave of absence and then took over the business after she died in 2018. He had to learn everything about running it, he said recently. “I went back and read all her emails . . . following the paper trail, the orders, where the merchandise came from.” He kept the relationships going that she had established and streamlined the product assortment.

“I didn’t think I would have an opinion but somehow I found it,” he said. He worked to fine-tune the balance between what he thought she would want while allowing his own views to influence his decisions.

He removed the cleaning and pressing aspect of the service that year. There are now fewer vendors, a more customized inventory, and a “refined color palette adjusted for the styles and looks of homes out here, and interior design trends out here,” he said. This includes, for example, cotton percale and linen sheets that breathe better in a damp atmosphere and do not need ironing.

The shop sells blankets and throws from Society Limonta and Coyuchi, bath towels made in Portugal in collaboration with Abyss Habidecor, and ceramic dinnerware and table linens handmade in Italy in collaboration with Society Limonta, along with its own line of over a dozen products that are sourced directly and made with sustainable materials. Among these are washed linen sheets made in Portugal, cotton percale sheets, hand-blown tumblers made in Brooklyn, and cashmere throws crafted in Mongolia.

Mr. Fowler has traveled to Portugal and Italy to visit factories and makers.

The space in Amagansett Square is breezy and open, simple but also intimate and restful, which “makes it more digestible for someone who doesn’t have too much experience,” Mr. Fowler said. The sheets that are arranged neatly on the shelves at the perimeter of the store vary in colors that include natural tones from gray to sand to tan to blue to white.

In addition to helping customers choose which items to buy, Mr. Fowler and his small staff — Alex Perez and Sheila Chriss — advise them on design elements, both in person and by text message. They will even go to customers’ houses to help on-site for an extra fee.

The name of the business is a play on words: Making coffee using a French press takes time and attention. “Mom left that legacy in the space, good energy. . . . She was super present,” said Mr. Fowler. “You were the only person in the room when she was speaking with you.”