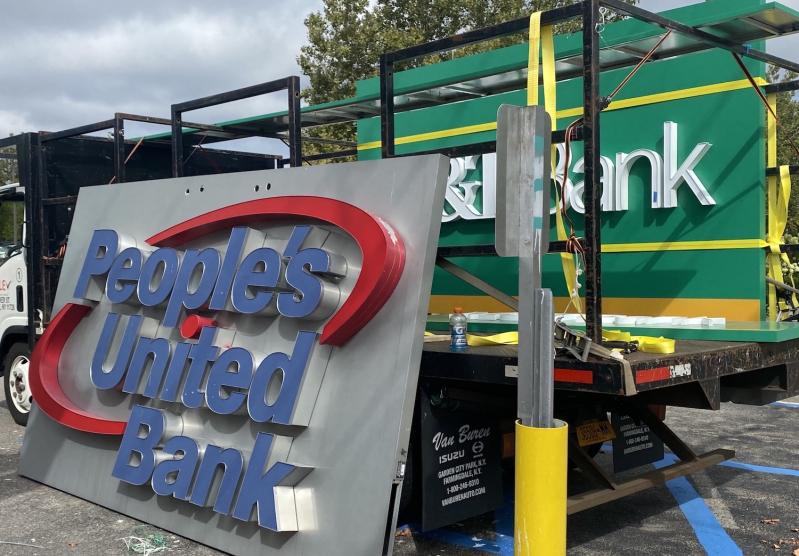 At soon-to-be former People's United Bank branches, it's out with the old signs and in with the new M&T signs.
Chris Jordan
By Tom Gogola

M&T Bank has promised a smooth transition for customers who bank with People’s United Bank but now find themselves in the midst of the nuts and bolts of M&T’s long-anticipated final takeover of People’s, happening this weekend.

To that end, the Buffalo-based M&T Bank has already committed to keep People’s public-facing employees on the payroll, which means that the friendly neighborhood teller at your People’s United branch will still be there next week. That’s just one issue of many raised after M&T merged with People’s back in April.

People’s is based in Bridgeport, Conn., and reporting in that state warned of potential downsides to the deal more than a year ago. In February 2021, the Hartford Courant reported that “job cuts and branch closures loom as the merger partners expect to save $330 million a year in costs, about 30 percent of operating expenses at People’s United Bank’s parent company, People’s United Financial Inc.”

But in a conference call with reporters that month, M&T’s chief financial officer, Darren J. King, told the Courant and others that the bank did not “anticipate any changes to speak of with the folks that talk to customers,” given that there’s not a lot of overlap on Long Island between branches of the two banks.

M&T has 50 branches and about 450 employees on Long Island, and about 1,000 branches from Virginia to Washington, D.C., employing about 22,000 people, according to a statement from an M&T representative. People’s United has about 40 branches.

M&T’s $7.6 billion acquisition of People’s United was given final approval by regulators on April 2, but the bank is utilizing the long Labor Day weekend to do the actual conversion of computer banking systems to try and minimize inconvenience to customers.

People’s United customers can still access A.T.M.s and use their People’s debit or credit cards over Labor Day weekend, but online and mobile banking services will be offline to ensure customer information is moved “safely and accurately” between systems, according to the statement from M&T. That is “standard with these types of conversions,” said the company representative.

Some changes have already taken place as M&T geared up for the final push this weekend. For example, People’s Person-2-Person Pay option is no longer available. M&T says customers are encouraged to check in after the transition is fully executed on Tuesday and consider using Zelle for that purpose. Bank-to-bank external transfers were suspended on Aug. 30 and will resume under the M&T Bank banner on Tuesday.

“We are committed to making the conversion as seamless as possible for customers,” said the bank in a statement, “and will work diligently to get online and mobile banking access up as soon as possible.”

The conversion will start to steamroll closer to the holiday weekend: Today at 10 p.m., People’s Bank debit card controls managed by People’s United Mobile Banking app will be deactivated. People’s has been encouraging customers to cancel any frozen debit cards if they haven’t already done so.

M&T says that once the M&T Mobile Banking app kicks in, on Tuesday, customers can access that to lock or unlock their M&T Visa debit card, order a replacement, or report a card as lost or stolen. Customers should have already gotten their new debit cards, which they can start using on Saturday.

People’s customers have also been told that tomorrow is the last day they can use their People’s accounts to pay bills and will have to log in to M&T’s Mobile and Online Banking starting on Tuesday.

“While account history will transition over,” a recent email to People’s customers advised, “be sure to download any specific bill payment history you would like to save.”

“We know change is never easy,” said the M&T representative.