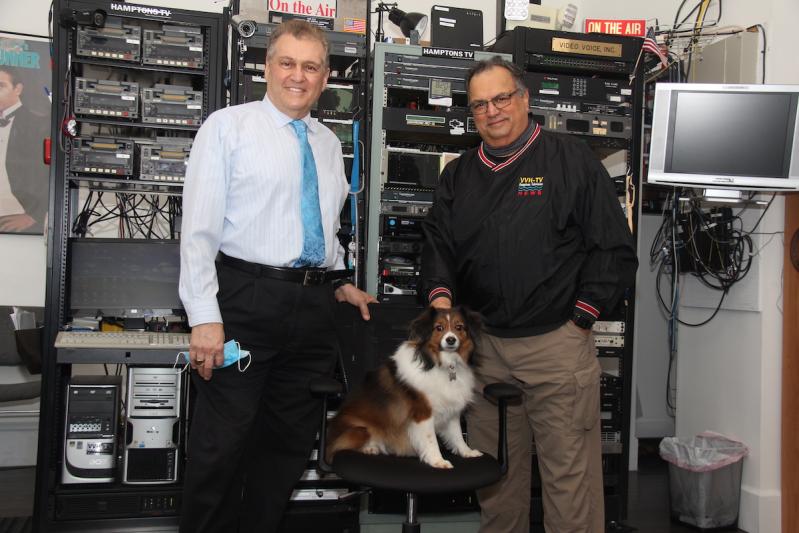 Ernie and Greg Schimizzi can run WVVH-TV largely from their iPhones.
Durell Godfrey
By Gabrielle Topping

Greg and Ernie Schimizzi, brothers who run Hamptons Television, WVVH-TV, out of East Hampton, will be inducted into the New York State Broadcasters Hall of Fame in October after 44 years of working together in the film and television business.

"It's an amazing and tremendous honor," Ernie Schimizzi said earlier this winter.

WVVH was the first New York television station to webcast and produce high-definition television on Long Island, Ernie said. "Many of our innovations that were born out of necessity are now the norm," he said. These included one-person camera reporting crews, web-streaming, internet broadcasts, and the use of iPhones to cover live events with simulcast on YouTube and Facebook.

In fact, the brothers run their 24-hour broadcast platform largely from their iPhones, having developed a system in 2004 that allows them to have master control of their programming from their phones and allows their viewers to consume their content without cable. "Our love of engineering has allowed us to manage the TV station remotely from our iPhones anywhere in the world," Ernie said.

"We were one of the first to utilize GoPro cameras to put the viewer in the middle of the action with jumping out of a plane, rock climbing, skiing, and surfing," Greg said. "Television is a unique medium and every day you need to feed the beast with words and action to keep it interesting with quality visuals and sound." They have added special event coverage of such things as the Hampton Classic horse show, the Hamptons International Film Festival, Hamptons Doc Fest, the New York Auto and Boat Shows, and The New York Times Travel Show to their programming.

In 1994, the Federal Communications Commission offered the last UHF license in Southampton to WVVH-TV, and the next year, the station began broadcasting from East Hampton.

Before Greg and Ernie joined forces to collaborate on WVVH-TV, they had collaborated in other areas. While in college -- both at New York University -- they published a book called "September 11, 1776 America's First Attempt at Peace," which discusses a peace conference held on Staten Island during the early stages of the Revolutionary War that had potential to resolve the conflict. The brothers invented an anti-theft trunk lock device for automobiles, for which they received a United States Patent in 1971 after filing for it without legal assistance. The anti-theft device was produced by Chrysler and the royalties helped pay for their next endeavors.

Greg Schimizzi became a psychologist with the Veterans Administration, but resigned in 1977, after 16 years, to team up with his brother to launch a television production and distribution company called Video Voice, producing more than 150 films and partnering with MacMillan Publishing Co. and the Canadian Broadcasting Corporation.

After starting WVVH, the Schimizzis became certified broadcast engineers. "The fact that we have been able to work together and share our family values in our work life is our greatest strength," Ernie said. "At the heart of Hamptons Television is the family bond."

Maintaining a personal connection to their viewers has also fueled their success. "We appreciate every viewer, we personally respond to every email," Ernie said. "We now have over six million households in the New York market. When the community calls, they are reaching the station owners."

"We enjoy a loyal and growing viewer base," Ernie said, but the brothers continue to "strive to be a better listener to meet the needs of our community. Whatever you do, you have to have passion." Hamptons Television takes "a lot of work. We don't do it for the glory."

Hamptons TV broadcasts on Optimum Channel 78 and Verizon FIOS 14, and can be streamed via wvvh.com.