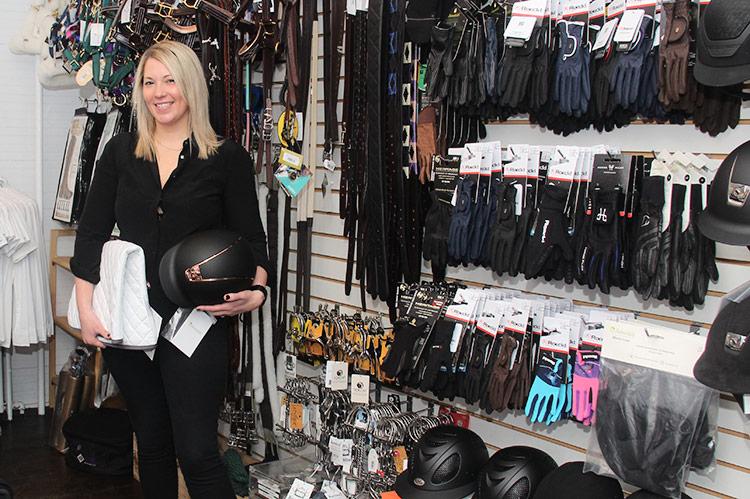 Erica Prado, whose Tack Trunk equestrian boutique is bursting at the seams, will reopen tomorrow in a larger space on Amagansett’s Main Street.
Durell Godfrey
By Isabel Carmichael

One of the oldest businesses on Amagansett’s Main Street is . . . no, not closing its doors but moving next door to expand.

The Tack Trunk will open tomorrow at 145 Main Street, a move that has been in the works since the fall.

Erica Prado of East Hampton, the shop’s owner, started riding at 3 and grew up competing at the Hampton Classic. She rode at Stony Hill Farm with the late Liz Hotchkiss as her teacher and worked after school, on weekends, and during the summers at the Tack Trunk, an equestrian boutique, to be able to keep her horse at Stony Hill.

In 2007 she bought the business from Leigh Keyes, also an equestrian, who had started it in 1994.

In recent years, “we brought in so many new lines, European lines, that people want,” that the shop was bursting at the seams, Ms. Prado said. “We do a good job selecting which brands we bring in . . . we’re almost like curators.” Seeing that the shop was outgrowing its tiny space, her landlord, Lorne Michaels, offered her another shop in a restored building just next door that is known as the Schellinger farmhouse.

She and her crew — five in summer — will have the whole ground floor, which will allow the tack, abundant clothing and boots, products for horses, toys for kids, and gifts for horse lovers to be more easily seen. Ms. Prado’s friend Ashley Libath helped design the new space.

She credits the huge growth of her clothing line and all the people who want to buy it with helping her business to grow. “It’s all been very positive, which has allowed us to make this move,” Ms. Prado said.

Even though she plans to add riding-related jewelry to her inventory, the main focus is clothing for equestrians. Riding clothes are now very “technical,” meaning wool and cotton are out in favor of microfibers with lots of stretch and breathable anti-microbial mesh, as well as UV protection in tops. “There is not another store on Long Island that has our variety of clothing.”