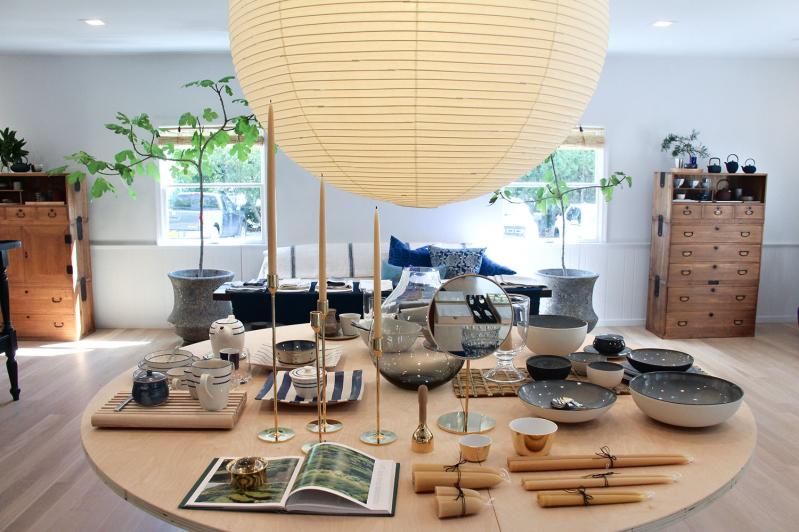 E — E Home in Amagansett has items for the home ranging in price from $15 to over $1,000 handmade by artisans from around the world.
Durell Godfrey
By Isabel Carmichael

E — E Home, a new store that appeared only a few weeks ago in the former Corcoran office on the southwest side of Amagansett’s Main Street, looks alluring from the small sidewalk garden patch, dotted with what appear to be miniature Asian evergreens planted among pale crushed shells.

It is upon stepping inside, however, that a feeling of having possibly strayed into a museum or an artisan’s studio hits.

The owner, Elizabeth Eichner, who used to be a set designer working across the fields of television, fashion editorial, and retail advertising, said she had found the majority of “makers” whose wares she sells and developed relationships with them through her work. Everything she has there is something she already has at home or would want to have: pieces that are not only beautiful and elegant, but that are “artisan driven,” have a story, have what she calls functionality, and can be used every day.

In addition, a wide price range is important to her. Customers will find everything from, say, a German handmade vegetable brush for $15 to Japanese stoneware sculpture side tables that are fired for several days in a wood-fueled kiln and available for $1,200. A large percentage of the things she sells are exclusive to her store in North America. She works directly with the craftspeople and artisans, who live and work in England, Scotland, France, Sweden, the Netherlands, Denmark, Germany, Japan, and the United States.

There are blankets from Scotland made of lambswool, linen and cotton hand towels from France, a whole set of cast-iron pans from Sweden, flatware by the late David Mellor, an industrial designer, beeswax tapers and royal warrant copper tea kettles and carving sets from England, felt place mats and coasters from Germany, as well as vintage items.

Ms. Eichner represents several studio potters, from Maine and Japan. The store also has garden tools, and even chocolate bars from Maine with scenes painted on the wrappers by Monhegan Island artists.