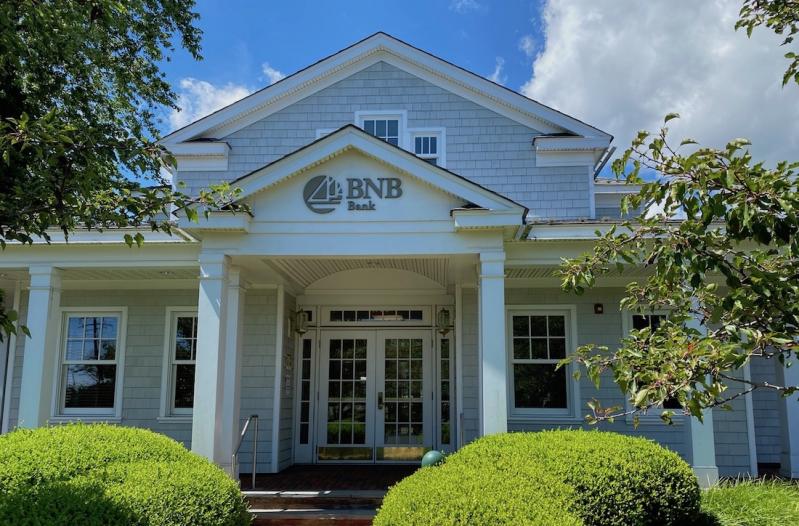 The impending merger of BNB Bank, the East End's last independent local bank, with Dime Community Bank of New York City will allow the institution to provide greater financial support to businesses while maintaining its connection to the region, Kevin O'Connor, the C.E.O. of BNB Bank, said in an interview last week.

"The value of our franchise is the East End, we recognize that," said Mr. O'Connor. Both BNB, which was founded in 1909 as Bridgehampton National Bank, and Dime are of an equal size, he said, but the areas in which they operate are different. "They start in Brooklyn and Queens and come east, we start in Montauk and come west. We have used the tagline 'Montauk to Manhattan,' but what we didn't tell you is that we skipped over Brooklyn and Queens. This will fill that in."

According to the terms of the agreement, Dime will merge into BNB, but the bank will operate under the Dime name. "While the name will change, it's still going to be the same people on the ground in our branches," said Mr. O'Connor, who will remain as C.E.O. "And the headquarters of the new bank will be in the middle of Long Island, in Hauppauge."

If the deal receives regulatory and shareholder approval, it is expected to be finalized in early 2021, and the combined company will have more than $11 billion in assets and 66 branches.

The merger would allow the bank to keep up with the financial needs of growing East End businesses, Mr. O'Connor said. "Whether you're selling trees or you're a landscape architect or a builder, there are serious businesses on the East End, and what used to be small businesses are now getting bigger and bigger."

In April, when the federal government rolled out the loan program to help small businesses survive the economic shutdown, BNB Bank took full advantage of its status as one of the Small Business Administration's preferred lenders to help out struggling companies, Mr. O'Connor said. "We did 4,000 loans, almost a billion dollars' worth of loans, and we're a $5 billion dollar bank," he said. "About a thousand of those are people who were not our customers to start with."

Given the downturn in the economy because of the pandemic, and with interest rates at record lows, the banking industry is facing several challenges right now, he said, but he doesn't expect the merger to result in a large reduction in branches or a downsizing of personnel. "The lenders that deal with customers will all keep their jobs, so it's really more that administrative costs will be downsized and other things behind the scenes that don't affect customers."

"What we've discovered during this pandemic is that although fewer people are using the branch physically, they still want to know they're there. We bank mostly to businesses, and they want to know who their banker is."

Last month, Mr. O'Connor contracted the virus, and was laid low for two weeks with fatigue and a loss of appetite, taste, and smell. "No breathing issues, thank God," he said. He is now mostly recovered, although his sense of taste and smell are still diminished.

Although he will retain his C.E.O. title, he will no longer serve as president of the institution, he said. That will free up some of his time to "think more strategically and go out and visit businesses," he said. "That's my favorite part of my job."

Once the merger goes through, he said, "it will allow me to spend more time on the East End, and I'm looking forward to it."

The Outdoor Agenda 09.17.21
A Surf Meetup for Youth
I-Tri Ride and Wine Is Saturday
END_OF_DOCUMENT_TOKEN_TO_BE_REPLACED